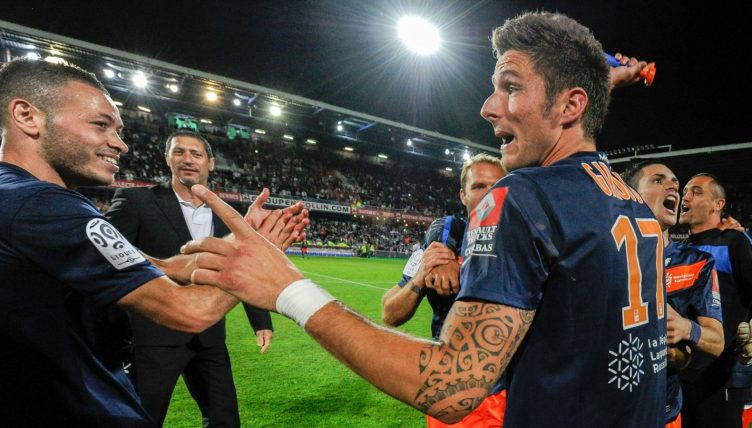 Olivier Giroud may be peerless when it comes to appearance as the best-looking man in football. Yet for most of his Premier League tenure, Giroud was overshadowed, at least in a footballing sense.

At Arsenal, there were the likes of Alexis Sanchez. At Chelsea, there was Eden Hazard.

During his time with Montpellier between 2010 and 2012, however, Giroud wasn’t just the main man in front of the mirror, but also in front of goal.

The France international, now second in his country’s all-time goalscoring chart behind only Thierry Henry, has only recently been truly recognised for his respectable goal-getting exploits wherever he has played.

This lack of acknowledgement has, in part, come not only from his solid yet unspectacular scoring statistics but also for the aspects of his admirable all-round game that often go unnoticed.

Flick ons, first-class hold-up play and an indefatigable work rate alike, Giroud is a jack of all attacking trades who has fallen victim to his failure in mastering any of those attributes consistently enough to climb into the world-class bracket. 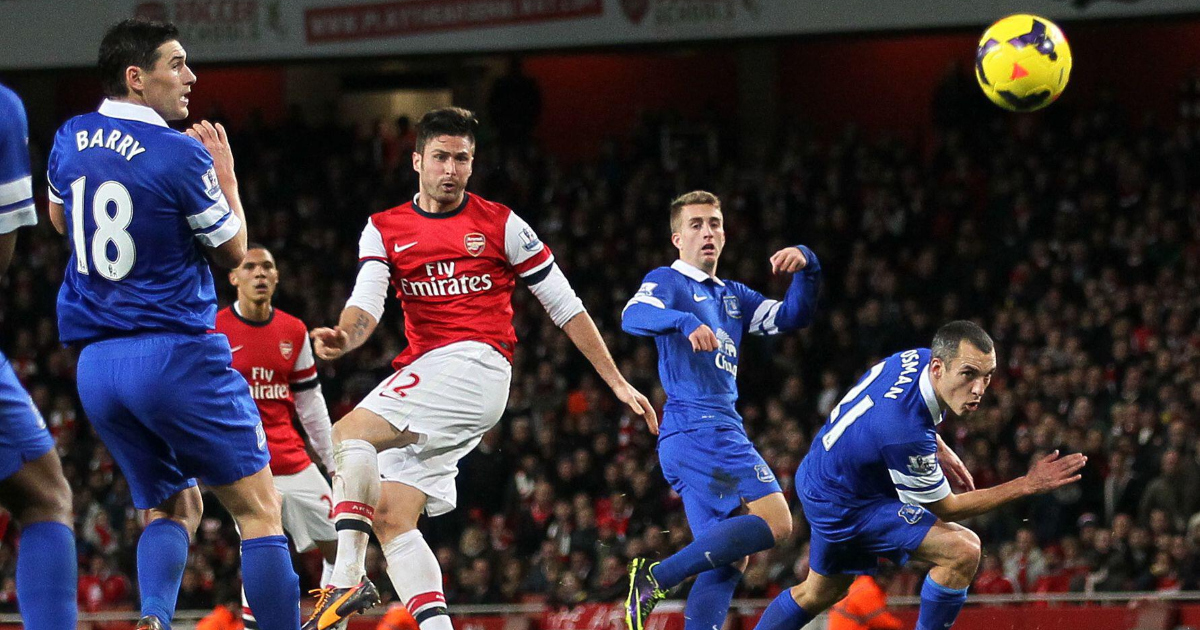 At least that’s what plenty of Premier League fans will tell you; the Montpellier faithful may beg to differ.

After narrowly missing out on promotion to Ligue 1 with Tours in 2008-09, the towering then-22-year-old took matters into his own hands the following season, scoring 21 goals and assisting a further seven, only for the side stumble into 11th in Ligue 2.

A chance to return to the top flight for the first time in 25 years had been and gone for Tours, but their star striker was primed for the step-up having already agreed to sign for Montpellier in January before being loaned back for the remainder of the season.

One year on from promotion at the expense of Giroud and Tours, Montpellier were flying under Rene Girard after securing a fifth-placed finish and European football to boot.

It was a match made in heaven for a team and a target man on an exciting ascent, but when Giroud came through the door for just £2million, it was little more than a move of low risk and limited expectation.

After an unforeseen exit from the Europa League to Hungarian outfit Hungary’s ETO FC Gyor, Montpellier’s momentum was stalled somewhat as they never hit a sustained vein of form in Ligue 1.

Giroud, on the other hand, had developed a bordering-on-cocky confidence to his play that continued throughout another accomplished campaign.

Giroud on turning down Celtic for Montpellier earlier in his career:

"I almost went to Scotland. It would have been a great showcase for the Premier League.

"But I got a phone call from the Montpellier president, who said: 'What the f*ck are you going to do in Scotland?'"

Symptoms of second-season syndrome were strong within the Montpellier camp for long spells of the season’s second half. Just two wins from their final 14 fixtures saw them finish only three points above relegation. That did nothing, however, to stop their new striker from stealing the show.

Whether it was a dink so deft his foot merely skimmed the surface of the ball at first glance, the dominance he had over defenders in one-on-one duels, or the sultry smoulders he would give to a camera upon scoring, the forward quickly became a favourite for many fans both in France and across the continent.

Nevertheless, Giroud’s rise was still in its infancy. If he was to win over the footballing world and showcase the true calibre of his credentials anytime soon, he needed a consistent and cohesive team built around his strand-perfect spearhead.

The arrivals of Henri Bedimo and Hilton looked to sure things up in defence, but it was apparent that the club were in no position to compete financially, with PSG spending over €80million on the likes of Javier Pastore, Blaise Matuidi and Thiago Motta in pursuit of their first title for 18 years.

Their impact in Paris was both obvious and immediate; 12 games and nine wins by November, including a resounding 3-0 win away at Montpellier, saw them sitting pretty at the top.

In spite of their defeat to PSG at the Stade de la Mosson, Giroud and co were hot on their heels, with their talisman’s ability to maintain an astounding strike rate largely to thank.

By the turn of the year, Giroud had played a direct part in 18 goals – 13 goals and five assists – in as many appearances, single-handedly earning his side 13 points, without which would’ve seen them drop from second to ninth.

As has always been the case with Giroud, if he wasn’t scoring goals (a rarity at this stage in his career), he was winning every header and working tirelessly through the channels to facilitate the freedom of his team-mates before picking them out precisely.

Rene Girard had assembled quite the set-up; assured at the back with wondrous wing-backs and magic in the midfield to turn defence into attack swiftly. None of that meant much, though, if he failed to revolve his regime around the formidable, faultless focal point.

After the winter break, Montpellier came back revitalised as they pulled away from the peloton, riding in PSG’s slipstream, awaiting an opportunity to take the lead in the league.

That opening presented itself at the perfect time. Four matches into 2012, La Paillade had four wins with zero goals conceded as they headed to Parc des Princes.

This felt like a title decider, swamped in equal measures of caginess and world-class quality. Alas, PSG did well to neutralise the threat of Giroud, with Alex and Mamadou Sakho matching him physically throughout.

Giroud was forced to drop deep or pull wide but still played a huge part in both his team’s goals as they earned a crucial 2-2 draw. Every team, even Carlo Ancelotti’s table toppers, targeted Giroud, trying anything from treading on his toes to tag-teaming him in the air to avert his presence, but he still found a way through.

From then on, the season’s end was fast approaching and both Montpellier and PSG found themselves fumbling in unfamiliar territory. A draw with Dijon and defeat to Nancy followed on the road for Girard’s men in mid-March, but it was Giroud’s late winner at home to Saint-Etienne that put them back in the driving seat as the Parisiens dropped points in three consecutive matches.

Now the title was Montpeller’s to lose, a mantle that only motivated Giroud to continue his magnificence. April brought a crucial trip to Marseille, and with nothing to separate the two teams at half-time, Giroud provided a sumptuous volley and an assist for a sublime Younes Belhanda strike to make the difference once more.

League goal number 20 came the week after, but it wasn’t enough to avoid defeat away at Lorient. With six games left, the gap between Montpellier and PSG was cut to two. The pressure was heating up and the Giroud goals started to dry up. Nevertheless, his overall contribution and his infectious confidence were as crucial as ever.

In a fluid 4-3-3 system that saw his attacking quartet interchanging in idyllic unison, Rene Girard had made a masterpiece of his Montpellier side, and a monster of his centre-forward. If they weren’t slicing teams apart with simplicity and style, they were tactically meticulous and manful in their incessant work ethic. Giroud epitomised this in every sense and proved symbolic of their subsequent success.

Three wins to nil followed from Montpellier’s four fixtures after the Lorient loss, as they welcomed third-placed Lille for the Stade de la Mosson’s swansong for the season. The hosts sat three points above PSG heading into the penultimate matchday, meaning a win would all but secure the Ligue 1 trophy.

To a man, woman and child, the home support was superb and nonstop throughout, deserving of the delirium that was brewing, though it was met with 90 nauseous minutes of football.

As full-time neared, Lille – who were still mathematically capable of retaining the title – pressed for a winner, with Eden Hazard and Dimitri Payet ever-dangerous.

With 93 minutes gone, a long and hopeless hoof from Bedimo looked to drain some precious seconds from the clock. Then, from nowhere, Giroud plucked it perfectly out of the sky before sprinting away with no one but two trailing defenders in sight.

A speculative shot appeared his only option, but the lone striker showed unbelievable composure and control to skip past Aurelien Chedjou, drawing out the remaining defender and goalkeeper before slotting it between their desperately outstretched legs and into the path of Karim Ait-Fana to score an unforgettable injury-time winner.

The Moroccan was the rightful recipient of the limelight, and the wrestles in the celebration that ensued, but it was a goal of Giroud’s making in a season that will forever be remembered for his marvel.

The glorious goalscoring exploits and the delightful link-up play had already been etched into Montpellier folklore, but not how a league title would be. That was secured seven days later with a win at Auxerre. Against all odds, Girard’s men had achieved the unfathomable.

By the end of the campaign, Giroud’s exceptional displays earned him a place in France’s Euro 2012 squad along with a furore of interest from clubs across the continent. He was destined for the top and no one was stopping him.

Two years on from playing second-tier football with Tours, Giroud had conquered his home country and advanced from France to bigger and better things. And he still managed to look like a handsome bastard for every second of it.