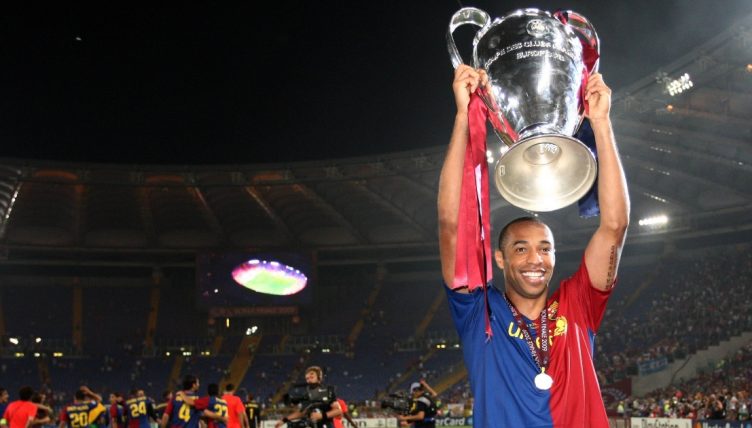 Thierry Henry always insisted that the only club he would leave Arsenal for was Barcelona – bad luck for the Gunners when the Catalan giants lodged a £16million bid in June 2007 then.

Understandably, it is his spell in north London that people think of when they hear his name. Henry scored 226 goals – many of them capable of triggering ripples of applause from opposition fans – and helped them to two Premier League titles across eight years.

But although his time in Spain was short-lived in comparison, he turned himself into an icon. Again.

Many expected the move to come a year earlier following the Gunners’ defeat to Barca in the 2006 Champions League final. But Henry instead chose to commit, signing a new four-year deal.

With Arsene Wenger’s future uncertain and vice-chairman David Dein departing in the 12 months after, Arsenal’s record goalscorer decided the time was right to depart.

It was viewed as a huge coup for Barcelona. Club president Joan Laporta lavished the Frenchman with compliments when the deal was announced, saying in his press conference: “Thierry Henry is a player we’ve been after for many years and now he’s here. Johan Cruyff wanted to sign Thierry Henry for Barcelona when he was a young player.”

His new club were not about to risk losing him soon either, placing an £85million release clause in his contract. So, he was substantially buttered up by his new employers. But now came the pressure to perform on the pitch.

Samuel Eto’o was Barcelona’s first-choice striker upon Henry’s arrival and Franck Rijkaard decided against upsetting the applecart, leaving the Cameroonian to his preferred role and sticking Henry into a position he had not played regularly since his brief Juventus spell: the left-wing.

It took him until game four with his new team-mates for his account to be opened, scoring first in a 3-0 Champions League against Lyon before battering a hat-trick past Levante in La Liga in typically assured style. But despite the steady stream of goals, it was a frustrating campaign, both for Henry and his team-mates. In the final three months of the season, Barca won just three league games and crashed out of the Champions League and Copa Del Rey.

In an interview with the BBC, Henry referred to England as “back home” and said that he even missed the British press. No one is believing that, Thierry. Despite the mood being a despondent one as Rijkaard packed his bags after finishing behind Real Madrid and Villarreal, the statistics shone a light on what had ultimately been an impressive campaign for Henry.

Top-scoring at Barcelona has never and will never be an easy feat, but nobody at the club scored more than him in all competitions in the 2007-08 season. Not Eto’o. Not even Lionel Messi.

Just because he had left north London did not mean that magical mix of arrogance and class had vanished. Cupping an ear to a hostile Levante crowd after securing that hat-trick and a glorious right-footed curler against Celtic in the Champions League made sure everyone knew it as well.

When Pep Guardiola took over as manager that summer, he was not messing about. Instantly, he declared that Ronaldinho, Deco and Eto’o were not part of his plans. The latter was likely music to the ears of Henry, whose own future at the club remained uncertain, but sadly for him, the Cameroonian ended up staying for the season.

As such, it was an unhappy beginning for the Frenchman, even daring to call out Guardiola for not sticking to his promise of returning Henry to his preferred central role.

“If this continues [playing on the left wing], of course we will have to talk about it,” he said at the end of September in an interview with The Telegraph. “It is true that I had talks with the coach before the start of the season. For me, the talks were clear.”

But while Henry may have remained a tad grumpy, Guardiola’s side were starting to purr – and Henry remained at the centre of things.  Between their second game of the league season and their 23rd, Barcelona won all but three, going unbeaten.

A ferocious first-time striker against Atletico Madrid and a typically chilled hat-trick against Valencia were the pick of Frenchman’s contributions.

By May, they were clear at the top of the table, in the final of the Copa Del Rey and, most importantly to Henry, one win away from becoming champions of Europe.

“It’s a dream for everyone to win the Champions League and I’m sure it’ll be the dream of Barcelona to win it again,” he said after signing in 2007. “It’s the only thing I didn’t win at Arsenal.”

After missing the controversial late semi-final victory over Chelsea at Stamford Bridge, Henry was recalled to the starting line-up for the final with Manchester United. An instinctive Eto’o finish and an incongruous but brilliant towering header from Messi gave Henry his first Champions League crown. It also completed the first treble in Spanish football history.

It was a season that secured him legend status at a second club. Henry and his fellow attackers scored 72 goals between them in La Liga – a record for the time.

Despite all the success he had under him, there was always a sense that Thierry Henry was not a Pep Guardiola player. That suspicion was confirmed when Pedro began to edge ahead of the treble winner during the 2009-10 campaign, limiting Henry to just 15 league starts.

It at least meant one more La Liga title was added to his growing trophy haul, Barcelona beating Real Madrid by just three points after losing just once all season. A Super Copa, UEFA Super Cup and Club World Cup took the previous campaign’s haul to a unique sextuple too.

Admittedly, when we now look back at Henry’s career, it is nearly exclusively images of a player clad in Arsenal colours. The knee slides, the swagger, the humiliation of Danny Mills. He was the perfect Premier League player. There are precious few moments from his Camp Nou days that jump to mind, Henry lost amid the legends produced by the Catalans in the years since his departure.

That does not change the fact that his time in Spain was a raging success, even if he was not entirely happy for all of it. In total, 45 goals were scored across those first two iconic seasons by Henry.

It was undoubtedly a brave move to leave Arsenal, a club where he was worshipped as a god. But it was worth it.