An ode to Aimar: A brilliant player unfairly overshadowed by Riquelme 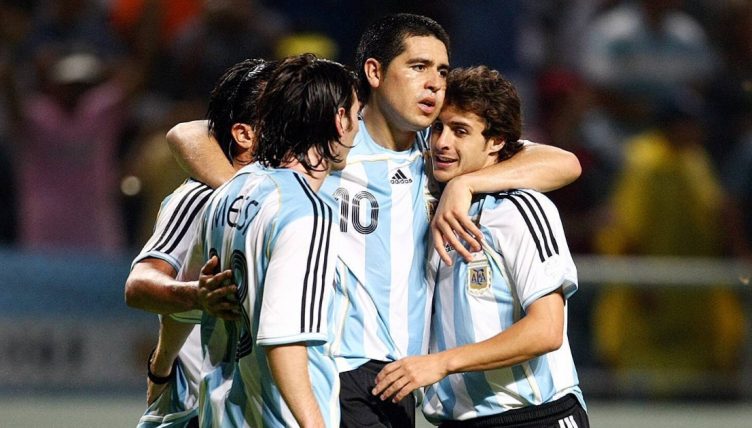 While Pablo Aimar and Juan Roman Riquelme enjoyed not too dissimilar careers, Aimar’s achievements haven’t had the same recognition.

On 23 January 2018, Pablo Aimar took to the field for the last time. Almost three years after retiring from the game, the Argentine midfielder returned, aged 38, for a one-off farewell appearance, wearing the captain’s armband for Estudiantes de Río Cuarto, the club with whom he had spent eight years at youth level but for whom he had never made a senior appearance.

It was a fitting way to say goodbye — to both the club and the sport.

It was fitting, too, that Aimar would spend the following Thursday chatting with Juan Roman Riquelme, another vastly talented playmaker whose career shared many parallels with Aimar’s.

“Aimar taught me a lot,” Riquelme revealed, chewing the fat with his compatriot as part of a TV interview. “The only thing we missed out on was playing together at club level. I couldn’t convince him to come to Villarreal.”

Reflecting on that missed opportunity with a moderate degree of seriousness, Aimar gave his own take.

“It would have been wonderful,” he said. “But I didn’t go to Villarreal because we would have needed another ball, since Roman never let it out from under his boot.”

Joking aside, it was a sweet reflective moment between two masters of their craft — one a River Plate graduate, the other a product of Boca Juniors.

But the two midfielders share more than just mutual respect.

In the late 1990s, Aimar and Riquelme both burst onto the scene in Argentina, breaking into the first teams of their respective clubs in Buenos Aires.

Both starred in Argentina’s victory at the 1997 FIFA World Youth Championship, defeating, among other opponents, an England team containing Jamie Carragher (19), Danny Murphy (20) and Michael Owen (17).

Their careers would thenceforth diverge, though not to a huge extent.

Aimar, having established a reputation as one of the country’s most exciting youngsters, moved to Spain in 2001, while Riquelme followed suit a year later.

In tandem right until the end, both players finished their careers with spells at their first two Argentine clubs: Aimar at River and then Estudiantes Rio Cuarto; Riquelme with Boca and then Argentinos Juniors.

It’s really no wonder they get on well.

Despite their similarities, however, the two players leave behind different legacies. While Riquelme is widely considered one of the best playmakers of his generation, the last of a dying breed and a singular talent, Aimar — also held in high regard, of course — is praised with a level of reserve.

His talents have been recognised by the likes of Lionel Messi, but many believe those talents could have reaped greater rewards. His was a career bordering on ‘unfulfilled potential’ territory.

There are reasons to place Riquelme on a higher pedestal than Aimar. For one, his trophy haul with Boca is significant, comprising four league titles, three Copa Libertadores victories and a smattering of further cups.

And while the Boca playmaker would earn one cap fewer than his River equivalent, Riquelme arguably made more of an impression on the biggest stage, excelling at the 2006 World Cup and captaining Argentina to victory at the 2008 Olympics.

Be that as it may, it fails to explain one important question: Why does Riquelme appear to have the bigger reputation in Europe as well as South America?

Riquelme spent four and a half seasons in Spain, one with Barcelona and the rest — more successfully — at Villarreal. He shone between 2003 and 2006, picking up La Liga’s Foreign Player of the Year in the 2004-05 season and putting his effortless playing style in front of European eyes.

We noticed. To this day, attacking playmakers with zero defensive responsibility are said to occupy a ‘Riquelme role’. Few others — Claude Makelele being one obvious example — have so comprehensively defined a position and its appropriate playing style.

Why on earth has Kaboul not been tried in the Riquelme role before?

But what of Aimar?

Given the respective reputations of the two Argentines in Europe, it would be easy to assume that Riquelme enjoyed greater success here.

The life of Pablo

Yet it was Aimar, who played in Europe for 12 years, who more efficiently converted his performances into European silverware.

After arriving at Valencia in January 2001, the midfielder settled in with ease, scoring a debut goal and reaching the Champions League final in his first half-season.

Just a month after his transfer, The Guardian’s David Lacey noted: “Gaizka Mendieta and the hugely talented young Argentine, Pablo Cesar Aimar, took [Manchester] United on in a battle of wits to which they knew too many answers for the comfort of Ferguson’s team.”

Over the next three years, Valencia would claim one UEFA Cup and two La Liga trophies. Since Aimar’s departure they have won neither.

After spending two years with Zaragoza in the mid-2000s, the midfielder formed a deadly, Argentine-heavy attack at Portuguese side Benfica, teaming up with Javier Saviola — another of the ‘unfulfilled potential’ gang — and Angel Di Maria.

Benfica won the 2009-10 Primeira Liga, scoring 78 goals in 30 games, with Aimar, the epitome of the team’s buccaneering style, finishing second in the assist rankings.

So should we, Europeans who witnessed the often-brilliant Aimar and the only-sometimes-brilliant Riquelme, not be referencing ‘the Aimar role’ as much as ‘the Riquelme role’?

A theory on status

Perhaps it is not just team honours on which the two players’ reputations have been judged.

Maybe it is not even on ability, of which Aimar had plenty. Indeed, if Lionel Messi considers a player his idol, that player must be pretty good, and the Barcelona legend has admitted that he used to “really enjoy watching [Aimar] play”.

Riquelme may have possessed more natural talent than Aimar, but he also cemented his legend in another way: with his deficiencies.

By being a player who did not easily fit into sides, a player around whom the rest of the team had to be built — Daniel Storey described him as “only effective when indulged” for Football365 — Riquelme drew attention to the reasons managers were happy to accommodate him. Control. Passing. Flair. Impeccable free-kicks. Nutmegs.

Being a one-man show can make you unpopular, but it can also make you a star.

Aimar was different. He had his tricks, too, which earned him his two nicknames: the ‘clown’ and the ‘wizard’. But he was also a more orthodox attacking midfielder, someone who could play in the hole, out wide or off the striker in a variety of tactical systems.

He didn’t have to be the centre of the team, and he didn’t stop running when his team lost the ball.

This is no doubt a good thing, but it may have precluded Aimar from earning a cult status as a singular, inimitable player — something Riquelme achieved in a third of the time. Aimar had bags of talent, certainly, but his more well-rounded skill set made him less conspicuous in an era of great attacking midfielders.

In hindsight, fortunately, we can give him his due.