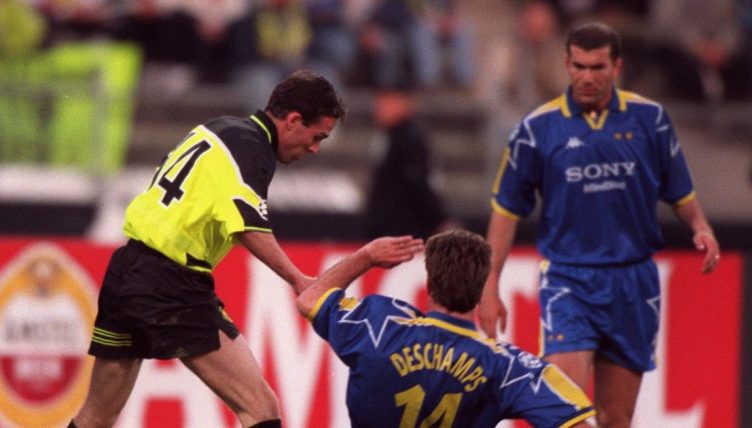 The 1997 Champions League final was meant to be the next step for Zinedine Zidane and Juventus. In the end, it was won by an unfancied Dortmund side marshalled by Paul Lambert.

By the time the final came around, Zidane was already one of the biggest names in European football.

While it would be another year before he lifted the World Cup with France and another four before his career-defining move to Real Madrid, the lad from Marseille had been tearing it up on the continental stage for quite some time.

Having inspired Bordeaux to victory in the Intertoto Cup in 1995 and the final of the UEFA Cup a year later – they ended as runners-up to Bayern Munich – he earned a high-profile move to Juventus and made an immediate impact in Turin.

Having danced and dribbled his way to the Serie A title in his debut season with the Bianconeri, Zidane also inspired them to the Champions League final with sublime showings at both the group and knockout stage.

Though – unbeknown to those watching on – he hadn’t quite reached his personal pinnacle, his performances in the Champions League that campaign had all the hallmarks of his unique genius. 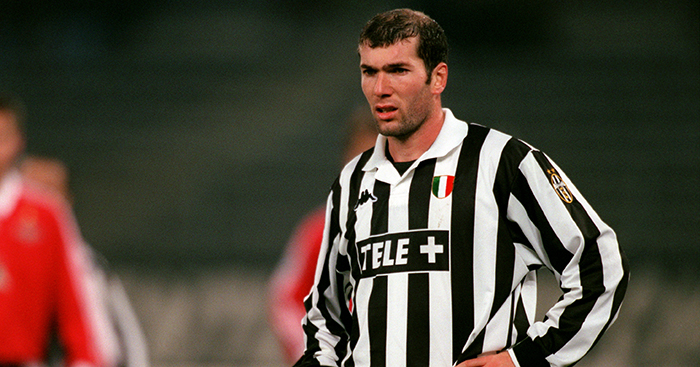 Zidane reigned supreme over the midfield, and the ball acted as his humble servant, with his regal close control, passing and movement allowing him to dominate the opposition at will.

He was instrumental in Juve’s two 1-0 wins over Manchester United in Group C, too good even for David Beckham, Roy Keane and Eric Cantona with his upturned collar.

When games were tight and cagey, as they were when a penalty from Alessandro Del Piero decided Juve’s November trip to Old Trafford, Zidane was the man keeping the ball out of danger as he jinked in and out of thunderous challenges.

When games were more open, as they were when the Bianconeri battered Rapid Wien at the Stadio delle Alpi, Zidane was the orchestrator carrying the ball forward and laying on goals for the men in black and white.

In the quarter-finals – there was no Round of 16 back then – Zidane scored a crucial goal in a tight two-legged tie with Norwegian champions Rosenborg, turning home a botched clearance before Nicola Amoruso sealed the win.

In the semis, he set Juventus apart from an Ajax side including Edwin van der Saar, the De Boer brothers and Marc Overmars, capping off a majestic second leg in Turin with a goal in a 4-1 win.

It felt as if Juve were bound for glory, with Zidane at the heart of a seemingly unstoppable team. Having won the Champions League the year before his arrival, the Bianconeri were on the verge of forging a European dynasty.

Then Paul Lambert came along and ruined the whole thing.

Outlandish as it may now seem to see their names written in the same sentence, it was Lambert who would thwart Zidane’s Champions League dream that season.

He didn’t do it alone, of course, but he was crucial to Borussia Dortmund in their quest to become champions of Europe for the first time. 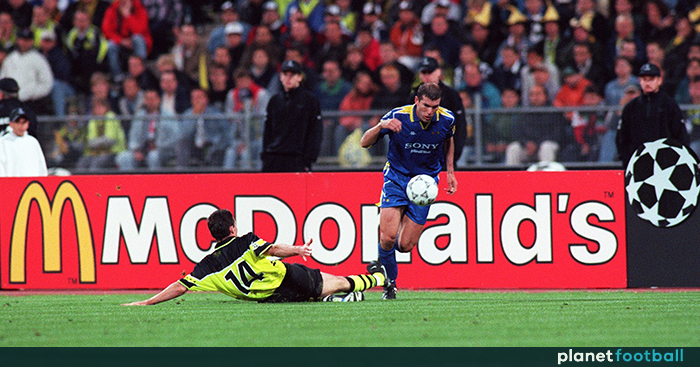 Signed on a free transfer around the same time as Zidane had been snapped up by Juve – this after impressing Dortmund manager Ottmar Hitzfeld while playing for Motherwell in the UEFA Cup – Lambert had taken a very different path to the final in Munich.

While Zidane had starred almost every time he graced the pitch and earned accolades the world over, his hardy Scottish counterpart had been slugging it out, often unnoticed, in defensive midfield.

Dortmund had finished second on goal difference to Atletico Madrid in a group which also included Widzew Lodz and Steaua Bucuresti, which hardly marked them out as prospective Champions League winners.

They beat Auxerre comfortably in the quarters before grinding out two narrow triumphs of their own against Manchester United, their hard-hustling approach in stark contrast to Juve’s stylish defeat of Ajax.

Lambert’s grist at the base of midfield was a large part of their success, and it was no coincidence that they kept five clean sheets en route to the grand finale.

Still, defensive nous aside, they were underdogs on the night, especially as they were on course to finish third in the Bundesliga and eight points behind first-placed Bayern.

To look at Zidane and Lambert before kick off, there would have been no doubt as to who was destined to become a global phenomenon.

One was a moody, brooding, only slightly balding virtuoso, while the other was a pasty, curly-haired whippet with the unmistakable air of having cut his teeth on the sodden pitches of Scotland.

Nonetheless, once the final kicked off, it was Lambert who produced the performance of a lifetime.

He stifled Zidane for large swathes of the game, man marking one of the most inventive players on the planet to the point that the Frenchman’s creativity slowly wilted.

With their midfield tussle ongoing, Karl-Heinz Reidle scored twice for Dortmund and – although Del Piero pulled one back in the second half – a goal from Lars Ricken secured a 3-1 win.

In a man of the match performance, Lambert even laid on the first goal with a looping cross to Reidle at the back post.

Dortmund had played a back five of sorts so he was certainly not alone in his defensive efforts, but his battle for supremacy with Zidane was marked out by many as the defining feature of the game.

Juve’s hopes of a grand dynasty in Europe crumbled: they would lose again the following season against Real Madrid, and the Bianconeri have now lost more Champions League finals than any other team.

Zidane, meanwhile, had to wait until 2002 to lift the trophy at Hampden Park, where his famous volley downed Bayer Leverkusen.

Fittingly, he overcame a German team in Scotland to finally get his hands on that most prestigious piece of silverware, with fate giving a nod to the man who foiled him in Munich five years previously.

Zizou, Laudrup, Baggio, Bergkamp and co: The best playmakers of the 90s