Paul Warhurst: From jobbing centre-half to England’s most lethal striker 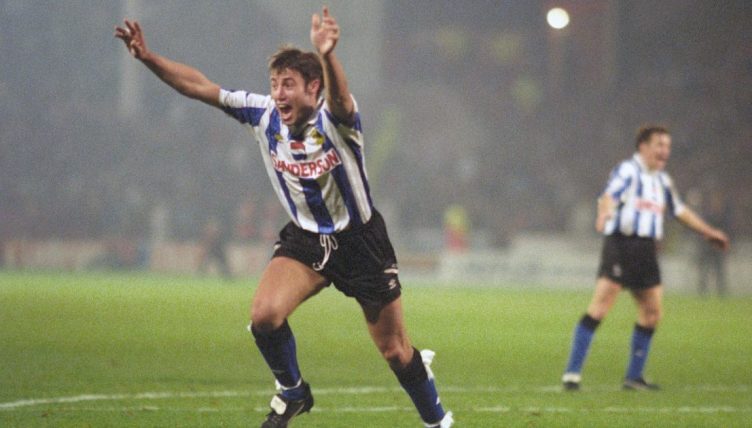 In the early season of 1992-93 Paul Warhurst was living a fairly unremarkable career as a professional footballer. After earning England Under-21 caps with Oldham, he’d moved to Sheffield Wednesday and carved out a reputation as a solid, if unspectacular Premier League central defender.

Wednesday, under the guidance of manager Trevor Francis, were a decent attacking outfit. John Sheridan played champagne passes across the middle of the park, Chris Waddle was still one of the best players in the league, and David Hirst’s left foot was capable of extraordinary acts of violence.

Nobody noticed the defence. And certainly nobody noticed Warhurst. In an age where Sky’s hullabaloo meant footballers were slowly becoming household names, Wednesday’s dependable centre-half was still effectively Mr Nobody.

He’d played 37 games without scoring in his debut season at Hillsborough, whilst his team-mates grabbed all the headlines. Kids in Sheffield were re-enacting Waddle’s wing wizardry, or hammering shots like Hirst. There wasn’t much playground kudos for quietly ushering a ball out of play like Warhurst.

Then in September 1992, an injury crisis left Trevor Francis in desperate need of strikers. Against all odds, he took a punt on Warhurst, hoping his speed would complement Mark Bright’s aerial prowess.

The makeshift forward notched in his first game, before grabbing three more goals over two legs of the UEFA Cup tie with Spora Luxembourg.

This said more about the standard of the opposition than anything else. I’m not saying Spora Luxembourg were shit, but you could have probably stuck Roy Hattersley up top and you’d fancy him to nick a goal. 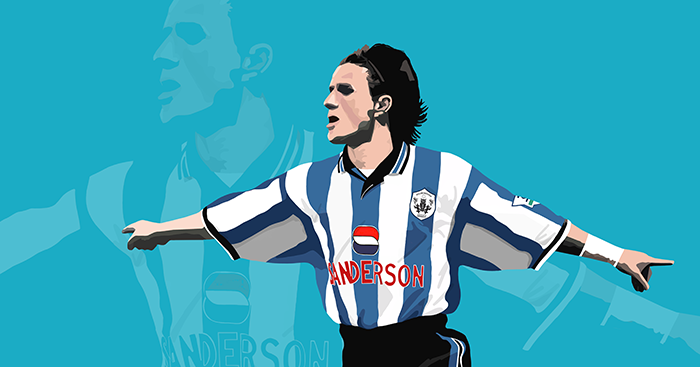 READ: Benito Carbone: Sheffield Wednesday are in my heart and I dream of return

When David Hirst returned to fitness, the fun little experiment seemed over. Warhurst happily returned to the anonymity of the back four – until more injuries in January meant Francis came knocking at his door again.

Overnight, Warhurst turned into the most lethal centre-forward in the country. He embarked on an extraordinary run of 12 goals in 12 games, propelling Wednesday up the league and into two domestic cup finals.

It wasn’t just the quantity of goals that was catching the eye. It was the quality. He was tearing past defenders at will, hitting the top corner with both feet, and powering back post headers into the net. To put this into modern-day context, this would be like Wolves chucking shot-shy Conor Coady up top and watching him morph into Cristiano Ronaldo.

Even Skynet couldn’t manufacture a striker as fucking magnificent as this. He was a machine. He couldn’t be reasoned with. He couldn’t be bargained with. He didn’t feel pity, or remorse, or fear. And he certainly wasn’t going to go back to playing the offside trap with Nigel Pearson.

He was outscoring the likes of Ian Wright, Les Ferdinand and Teddy Sheringham. His incredible form was rewarded with a call-up to Graham Taylor’s England squad. Within the space of three months, he’d gone from jobbing centre-back to a potential England No.9.

👊 Paul Warhurst booked The Owls their place in the semi-finals when he latched onto a superb cross by John Sheridan pic.twitter.com/J7jCsr6BZK

His manager didn’t quite know what to make of it all. Hardly a risk-taker, was Trevor Francis. He had the air of a man who’d spent a lifetime quietly lobbying for champagne corks to be replaced with ring pulls.

He was also the genius who famously rejected Eric Cantona a year earlier when he had the chance to sign the Frenchman on a free transfer. Hindsight makes fools of us all, but it takes a special judge of a player to turn down the most important player in Premier League history because you thought Nigel Jemson would win more flick-ons.

All of which probably explains why Warhurst was jettisoned in favour of David Hirst for the FA Cup Final with Arsenal. In fairness to Francis, another injury crisis (training at Sheffield Wednesday in this era seemed more dangerous to your health than enlisting with the SAS) meant they were short at the back and his multi-talented star was needed there.

The relationship between player and manager soured. Warhurst moved to Blackburn the following season, but two catastrophic leg breaks meant he never regained that sparkling form of 1993 and he eventually reinvented himself again as a holding midfielder.

Nonetheless, his story was an inspiration to us all. There were still fairytales in football. From unassuming stopper to unstoppable striker. For a few weeks in 1993, Paul Warhurst lived the dream.

Sid Lambert has teamed up with Quickly Kevin host Chris Scull to author Can We Not Knock It? A Celebration of 90s Football. From Ceefax to Subbuteo. From Des Lynam to Diana Ross’s penalty technique. It’s a tribute to the niche and the nonsense of the 90s. This article is an extract from the book, which you can pre-order here.