A celebration of the best chipped goals of the 90s: Albert, Cantona, Bergkamp… 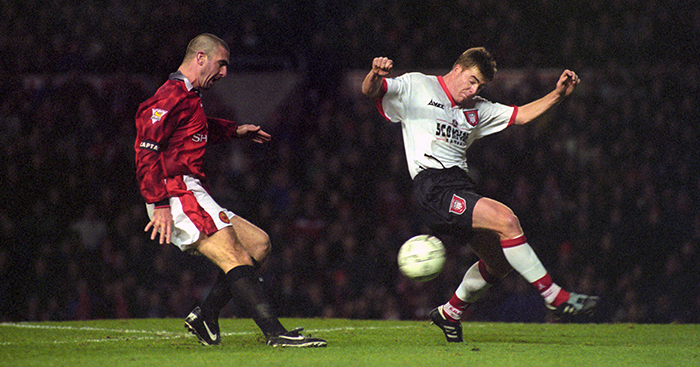 From Bergkamp to Bohinen, @Sid_Lambert picks out five great chips of the 90s for you to feast your eyes on.

Before I start, I just want to clarify something: I love a Thunderbastard. Seeing a ball tear-arsing towards the top corner past an outstretched glove fills my heart with joy. And these days there are plenty of them.

Lighter balls, better boots, an abundance of technically gifted players – whatever the reason, it seems that every Saturday night we’re treated to another awesome display of top-class tonking. Oh yes, these are the glory days in The House That Tony Yeboah Built.

And maybe that’s the problem, at least for me. Maybe I’m too… spoilt. Familiarity has drifted me unconsciously into the realms of contempt. Because while I appreciate the weekly instalment of wanton violence, it pales into insignificance compared to the effortless grace of a chip.

There’s something about seeing a player chip a keeper that can’t be beaten. It’s a goal rooted in polar opposites: the pulse races yet time, time itself stands still. From the moment the ball leaves the foot and begins its slow, seductive, inevitable arc towards the net, there is so much to appreciate.

There’s the look of despair on the goalkeeper’s face, the brazen swagger of a celebration from the outfield player, and then the gradual realisation of the crowd as it crosses the line. There are few moments in football quite like it.

As goalkeepers get bigger, stronger, faster, it feels like the chip is an endangered species, whereas the 90s was a golden age. Here are five classics of the genre from a decade where a dink was de rigour.

Yes, it’s Lionel Perez – a man who looked like he was permanently auditioning for a role as Michael Bolton’s stunt double – in goal, but this is up there with the very best.

Mainly for the celebration. King Eric stood still, his broad shoulders retracted to maximum effect and soaking in the acclaim.

In historical terms, this is Maximus Decimus Meridius holding his sword aloft after slaying the Emperor’s men in the Colosseum and asking the baying mob: “Are you not entertained?”

In football terms, this is Cantona, the most influential player in the league, saying: “Yeah, you better fuckin’ clap, you c*nts. It doesn’t get much better than this. Trust me.”

There have been fewer more iconic sights in Premier League history than Philippe Albert striding forward, his perfect moustache bristling in the wind, and chipping a stranded Peter Schmeichel.

What the fuck the big Dane was doing there has never quite been established. He’d wandered off his line like a middle-aged man who’s been woken from his sleep by a strange noise at the end of the garden.

What makes this goal all the more extraordinary is the context. This would have been a sensational strike against one of the Premier League’s strugglers. But these were the top two teams in the country going toe-to-toe. This was one of the best keepers in world football.

This was Kevin Keegan’s Entertainers giving precisely zero fucks, stuffing Manchester United 5-0, and the neutrals were loving it, just loving it.

For so long, we’ve become used to promoted teams parking the bus. Giving up possession, two banks of five, hoping to nick one from a set-piece.

It didn’t used to be this way. Before the era of dour solidity and defensive shape, there was no shame in turning up and – in tactical parlance – giving it a fucking go.

There was no better example of this than the mid-90s Nottingham Forest. Frank Clark, who had the permanent regard of a man who’d found a melted choc ice in his back pocket, had got his team promoted through balls-out attacking football and he wasn’t going to change his ways once he’d got to the top tier.

They took the Premier League by storm, marching their way to an eventual third-placed finish. Collymore and Roy up front. Woan and Stone on the wings. And in the midfield the mercurial Lars Bohinen, scorer of this sublime goal at White Hart Lane. The finish was greasier than Ian Walker’s hair. And that’s saying something.

It’s the 25th anniversary of this filthy little chip from Forest’s Lars Bohinen.

A strong 7.5 on the Philippe Albert Index.pic.twitter.com/eyuAtklqVE

Choosing your best Bergkamp goal of the 90s was like choosing your favourite Pamela Anderson swimsuit. Among all the big hits, this is a forgotten gem. And arguably one of the most technically difficult.

Striking a ball first time across your body is a traditionally a high-risk recipe for Row Z. And for those that try it, the common courtesy is to put your laces through it. However, the Dutch master was about as fond of convention as he was of Ryanair. He made a decision that few had tried before, or since.

Unlike France 98, there’s no epic Barry Davies commentary to accompany this one. But you have to say, that’s brilliant.

#OnThisDay in 1999 a moment of instinctive brilliance from Dennis Bergkamp.

Goodness me. Who even thinks about a finish like that?pic.twitter.com/GRIgZ7qAY7

Davor Suker. You remember him. Croatian. Left foot filthier than a miner’s shovel. And this goal at Euro 96 shows why.

Once again, Peter Schmeichel was the victim. Though his positioning was more understandable on this occasion. With the Danes (reigning European Champions) trailing 2-0, the big fella had gone forward for a set-piece looking to cause some good old-fashioned bovver in the box.

But when the Croats defended the corner and broke, it left Schmeichel in a foot race to get back to his area.

Luckily for him, he had defenders coming to shield him from the onrushing Croatian striker. Unluckily for him, that striker was Suker. The first touch is masterful, directing him into space. The second is about as smutty as it gets.