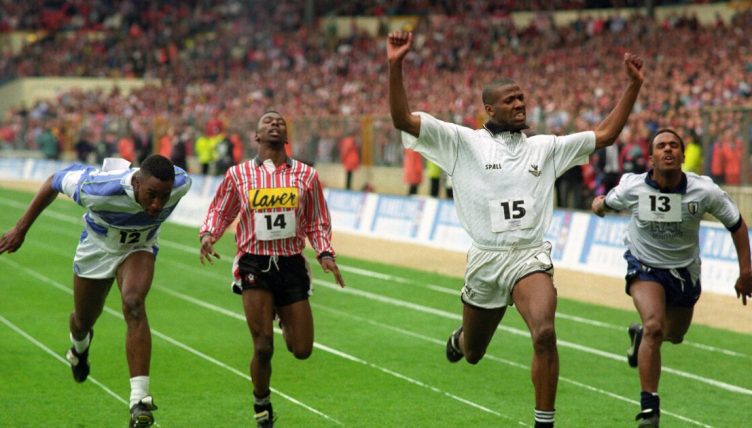 Imagine how amazing it would be if the fastest player from every club in the top four divisions competed against each other to be crowned the fastest of all.

Now imagine if the player who eventually won it did it with a steaming hangover. In 1992, that actually happened.

If it was to happen in such circumstances these days, sports scientists across the country would have a fit. Raymond Verheijen would break Twitter.

But football was very different back in 1992 when League Cup sponsor Rumbelows, an electrical retailer which rivalled Dixons, Currys and Comet – not very successfully, as it turned out – set about finding the fastest player in the four divisions of the Football League.

Rumbelows were serious about it, too. They stumped up a £10,000 cash prize for the winner, which was a huge sum even for the First Division stars, let alone the journeymen in the lower tiers.

To get their hands on the cash, entrants – one from each of the 92 clubs – would have to negotiate their way through one of six regional heats before the winner and runner-up of each heat were joined by the four fastest losers at Wembley.

The sprint semi-finals and final were to be the curtain raiser for the League Cup final between Nottingham Forest and Manchester United.

Just imagine that for a second – instead of the usual pre-match ‘entertainment’ we get nowadays before such games, picture Hector Bellerin, Jamie Vardy and the rest of the country’s quickest footballers sprinting down the side of the pitch before kick-off. It would be sensational.

The grandeur of the occasion, however, did not stop Swansea City’s entrant John Williams turning up with a raging hangover.

Williams, who went on to score the second ever goal in the Premier League seven minutes after the first by Brian Deane, had played 90 minutes for the Swans on the Saturday, scoring in a 1-1 draw at Darlington in Division Three, before making a 230-mile trek via team coach and train down to the Watford Hilton.

Rumbelows paid expenses for each finalist and a companion, so Williams took Jon Ford, a team-mate who was celebrating his birthday.

“We had some steak and chips, and because it was Jon’s birthday I said, ‘Come on, let’s celebrate with a couple of pints,’” Williams told FourFourTwo. We all know the direction in which this is heading…

“One became two and three became four. We had a bottle of champagne and then we got on the spirits. I was paralytic. I think I ended up back in my room at 3am. I threw up and the next thing I knew, I was waking up in a bath.

“Jon was spraying me in the face with cold water, there was a shockwave and it drove me crazy. I started to attack him. Then I realised what was going on – he was shouting at me, ‘We’re late! We’re late!’”

Luckily, as he had already demonstrated, Williams could shift when he had to, and he made it in time to the start line beneath Wembley’s twin towers. There gathered the qualifiers from the regions, all vying for 10 grand.

Kevin Bartlett was the fastest in qualifying for Wembley, covering the 100 yards in 11.40 seconds.

The Notts County flier was duly made the favourite by Ladbrokes, with Saint and Greavsie joining Bartlett’s team-mates in heavily backing the striker before he was priced at evens just prior to the starter squeezing the trigger on his pistol.

But what the bookies didn’t know is that their favourite had been carrying an injury in the weeks leading up to Wembley.

Alan Parry, meanwhile, had lumped on Manchester City’s Keith Curle, but a tasty reception from the United fans on the day may have contributed to him being dumped out in the semi-finals.

So Williams and Bartlett were joined in the final by Jenkinson, Gilkes, Littlejohn, Witter, Ekoku and Fleming. Notts County, QPR and Sheffield United represented the top-flight clubs, while the rest of the field comprised of a quartet from Division Three and a sole representative from Division Four. 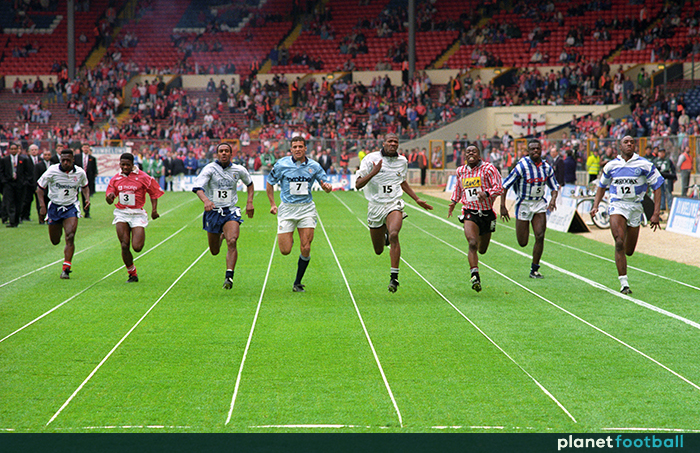 Williams, fearful his hangover would mean he might not get back up again if he got down into a traditional sprinter’s start, opted for a standing start.

Bartlett, however, suffered a far worse start and was still in the pack at the 50-yard stage, by which point, like Usain Bolt, the six-feet-one-inch Williams opened up his long legs as the hangover fog began to clear with the finish line coming into sight.

By the time it arrived, there was no need even for Williams to dip. The Swansea striker won by a considerable length.

“Yes, you might well thank a superior power for that one,” proclaimed Parry as Williams blew a kiss skywards in celebration.

“He’s had a smashing weekend,” said the commentator, presumably blissfully unaware of the events that led to the newly-crowned fastest footballer in Britain spending the night before sleeping in a Watford Hilton bathtub.

“He wouldn’t disgrace many sprinting tracks around the world,” said Steve Cram of Williams’ performance. “If his team doesn’t do so well, he might want to look at the Olympic trials later on in the year!”

Williams not only pocketed the £10,000 winning prize but also arranged a tidy bonus from Ladbrokes, as did a few of his Swansea team-mates who backed him at 16/1.

“Quite a few of it was mine, yeah,” he replied when it was put to him by Gary Newbon that hundreds of pounds had been wagered in South Wales.

“For a player in the lower divisions, that is some payday,” said Parry – but Rumbelows were almost unable to pay it.

The company, which never made a profit in 24 years of trading and by that time were losing £12million a year, disappeared from the high street not long after, but Williams did receive his £10,000 prize: “I couldn’t believe it. I put down a deposit on a house and bought a car, a Peugeot 205 GTI 1.9.”

We suspect it would take rather more than £10,000 to convince the Premier League stars of today to take on the challenge…but we can dream.