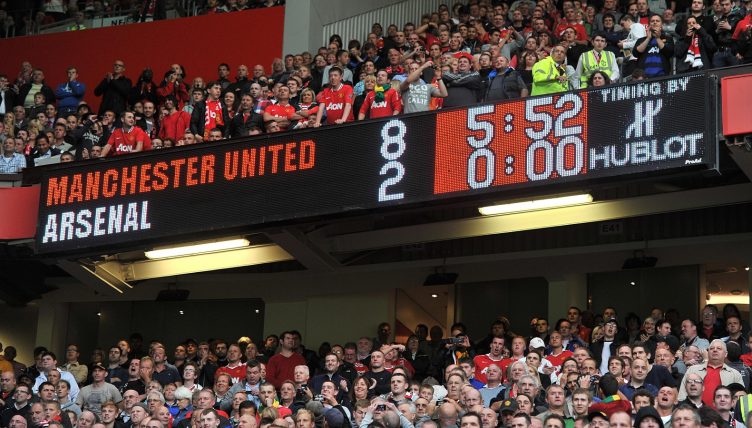 Eleven years have passed since Manchester United put eight goals past Arsenal at Old Trafford at the start of the 2011–12 Premier League season.

It was a game that foreshadowed either a lot or a little, depending on how you see it.

In an obvious way, the match presaged the general misery of the late-Wenger years, occurring almost exactly midway between their winning the league as Invincibles and their sad, belated bye-bye to their manager.

The humiliation was also the catalyst for a number of transfers, some of which would prove significant for both teams.

Arsenal left-back Armand Traore was sold just two days later, and within the week the club had signed Per Mertesacker, Mikel Arteta and Andre Santos, two of whom continue to play an important role at the club. (The other owns a terrible restaurant.)

At the same time, however, the scoreline was contraindicative of future events: it was a game of false dawns as much as dark omens.

Wojciech Szczesny, Aaron Ramsey and even Francis Coquelin matured into good players; Jones, Anderson and Cleverley arguably did not.

What the fuck is Wenger playing at picking up Oxlade for £15m when he could have, theoretically, had Ashley Young for £16m.

Meanwhile Wayne Rooney, Ashley Young and Nani would never again be as prolific as they were during this season.

In fact, Arsenal’s scorers in this game would score more league goals for United the following season (2012–13) than United’s own: Van Persie would get 26 while Rooney, Young, Nani and Welbeck would muster just 14 between them.

Even the bragging didn’t last. United lost 6-1 to Manchester City less than two months later and ultimately ceded the title to their city rivals, somehow managing to take the fun out of the 8-2 as well as any potential significance.

Regardless of its implications, though, the match contained some really, really good goals. Here they are, ranked by beauty.

Wayne Rooney’s hat-trick was almost sealed by a Cantona-esque chip from miles out, only for that audacious effort to strike the post.

Instead, Rooney earned himself the match ball courtesy of a crap Theo Walcott challenge in the box.

This was only David de Gea’s fourth appearance for Man United, and though he saved a Robin van Persie penalty in the 27th minute, the nerves were still apparent as he let Theo Walcott’s shot go through him just before half-time.

De Gea eventually became a world-class keeper, but it’s strange to think that, aged 30, his stock is now lower than Wojciech Szczesny’s.

Park Ji-Sung only scored two goals in his final United season, and he probably enjoyed this low left-footed strike more than the other, which came in a 5-0 win over Wigan.

In the corner, but too slow to rank higher up this particular list.

Danny Welbeck scored better goals for both United and Arsenal, but did Anderson get many better assists? His lovely scoop put Johan Djourou on his arse, and Welbeck did the rest.

Was he marked? No. But Van Persie striking an airborne ball is always a sight to behold, even from six yards out.

Scoring his penalty to make it 1-1 would have been more useful, mind you.

Ashley Young got a hat-trick of assists in this match, and two of them involved simply putting his studs on the ball.

Anderson also gets some credit for creepily staring at Szczesny and causing the Pole to fluff his save.

In contrast to the lovely strike, Rooney’s celebration was one of the worst of the game, with Patrice Evra (predictably) unable to hoist his burly teammate over his little shoulders, causing the pair to fall to the turf in a heap.

This was the day Ashley Young became — briefly — the right-footed Arjen Robben, cutting inside and bending the ball into the far corner with style.

Young scored six league goals for United in 2011–12. After that, however, he would never register more than two. His reinvention as a full-back has been admirable, but it’s a shame we didn’t see more goals like this.

That being said, Young is older than Wayne Rooney and is still a decent Premier League player.

Nani always enjoyed dicking around against Arsenal (in the best way possible) and his chip over Szczesny was typical of the Portuguese winger.

That the Arsenal ‘keeper almost had time to get back up makes the goal even better.

It’s hard to tell whether this is actually a better free-kick than the first, since there’s effectively nobody trying to save it.

But to instil that much fear into the opponent, to make him so doubtful of himself that he has to commit to one side for a 25-yard free-kick… that’s something.

A bootleg version of this Beckham beauty?

A goal better than all the rest, despite a celebration even worse than Rooney flopping over Patrice Evra. (An attempted knee slide without the requisite momentum or lubrication.)

Ashley Young brilliantly gave himself a yard by getting away from Francis Coquelin, then teased the ball into the far corner.

Even David Seaman or Jens Lehmann would have struggled to save it.

READ MORE: The 10 PL games so iconic they’ve got their own Wikipedia page