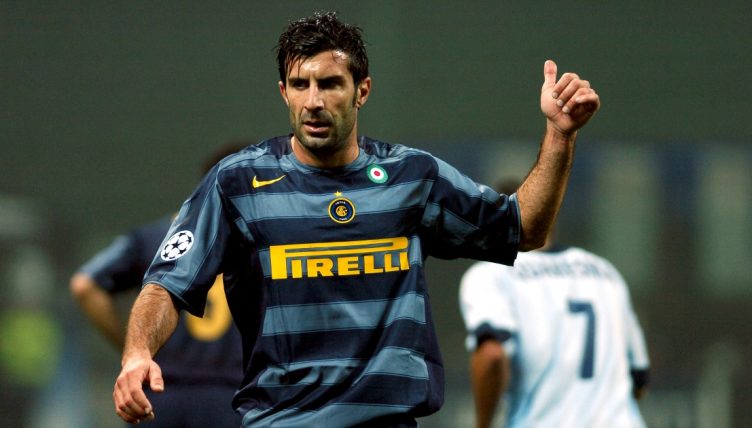 During his four years at Inter Milan, Luis Figo won four Serie A titles – but he was also accused of intentionally running over a black cat at their training ground so, yer know, there was good and bad.

Figo’s first goal for Inter was not a memorable one. In fact, so low were the stakes during the ‘Sky TV Trophy’ in August 2005, only around 300 spectators saw Inter win 2-1 against Al-Ittihad in what was essentially a 60-minute kickabout.

No video evidence exists of Figo’s goal in the fourth minute, but the match report on Inter’s website tells us it was “spettacolare”. Given what we know about Figo, that’s not hard to believe.

From that point on, things would get a little more serious for Figo. At the age of 32, the Portugal legend was looking for one final challenge that would do justice to his already spectacular career.

Inter seemed a sensible choice. They were a club going places. The season before, they had won the Coppa Italia and finished third in Serie A, losing just twice all season.

A 22-year-old Adriano had scored 28 goals in all competitions, and other key members of the squad included Francesco Toldo, Javier Zanetti, Ivan Cordoba, Esteban Cambiasso and Dejan Stankovic.

It was a strong side but one in which the right-wing berth was very much up for grabs: the year before, it had been occupied in shifts by Andy Van der Meyde and Brazilian wingback Ze Maria.

That made Figo something of an automatic pick for his debut season. But few fans at the San Siro expected the midfielder to acclimatise quite so quickly and comfortably.

Figo began the 2005–06 campaign playing on the wing or behind two strikers in a midfield diamond, often moving around to confuse opponents (and Inter staff).

He scored his first real goal for Inter on November 20 against Parma, latching onto a Juan Sebastian Veron through ball and dinking past the keeper.

A few weeks later the winger, now 33, claimed a hat-trick of assists in a 4-0 rout of Reggina.

The new signing was enjoying himself, playing with a level of freedom that was apparently all of his own making.

“I don’t tell him to stay on the wing or move him if he moves to the middle,” explained manager Roberto Mancini. “Figo knows he can go and play where he wants at a certain point in the match if he feels it’s right.”

Inter’s midfield had improved, but the team didn’t see an immediate uptick in results.

Although Inter eventually won more matches than they had in 2004–05, they increased their number of defeats by six, and by the end of the campaign their 76 points were only enough for another third-place finish.

As it turned out, the Calciopoli scandal of 2006 saw Juventus and Milan retroactively docked points, launching Inter into first place and earning them their first Serie A title since 1989.

It was a lucky turn of events for Inter and Figo, though they would need little luck over the next few seasons.

Ahead of the 2006–07 campaign, Inter signed Zlatan Ibrahimovic and Patrick Vieira from relegated Juventus and were boosted by handicaps to their nearest rivals.

Juventus were left to fight for their future in Serie B, while strong sides like AC Milan and Fiorentina were docked points, effectively neutering their title aspirations before the season began.

On an individual level, things got off to the brightest possible start for Figo.

In the Supercoppa Italiana, the first game of the domestic season, Inter fought back from 3-0 down to beat Roma 4-3 in extra time, with Figo hitting the winning goal in the 94th minute — his finest strike in black and blue.

With an even stronger team and weakened rivals, Inter cruised to a second consecutive title, breaking records along the way. Between October 2006 and late February 2007, the club won 17 consecutive league matches.

But the 34-year-old Figo found himself in and out of the side, and over this period his relationship with Mancini became strained.

The midfielder later said: “I have always behaved in the same professional way, but [Mancini] showed a lack of respect with some of his choices. A coach is always free to criticise his players, but Mancini did it in the wrong way with me.”

And so, after just one and a half seasons, the Portuguese agreed a transfer away from Inter — to an unlikely destination.

In January 2007, it was announced that Al-Ittihad, the team against whom Figo scored his first Inter ‘goal’ in front of a handful of fans, would be the midfielder’s next club.

The Saudi team had made a generous offer, described modestly by their chairman as “one of the biggest contracts ever seen in the Middle East”.

“I was looking for a soft solution,” he said. “I didn’t want to retire immediately. This way I can play another five or six months of light soccer.”

He added that he “needed to feel important”, suggesting that Mancini’s squad rotation was not to his liking.

But all was not as it seemed.

As Inter played out the second half of the 2006–07 season at walking pace, eventually winning the Serie A title with five games to spare, there were disagreements happening behind the scenes between Figo and Al-Ittihad.

In May, after scoring his only two league goals of the season in the final two games, Figo called off the Saudi deal, citing breach of contract.

The collapse of the move left Figo in limbo, but Inter president Massimo Moratti ultimately convinced the midfielder to sign a new one-year deal — with the promise that he could become an international ambassador for the club at the end of the season.

Despite tensions with Mancini, Figo stayed on.

Killing a cat (and a silver fox)

Over the 2007–08 campaign, a 35-year-old Figo was in and out of the side, and his playing time was limited further when he broke his fibula after just 11 games.

When he returned to action in February, Inter were top of the table, but the veteran midfielder was mostly limited to cameos from the bench.

Then, towards the end of the season, strange things started happening.

During the second week of May 2008, a journalist named Vittorio Feltri, editor of the newspaper Libero, accused Figo of intentionally killing a black cat.

The cat “loved to stretch out on the grass where the Inter players would practice”, wrote Feltri, who accused a superstitious Figo of running over the animal to alleviate bad luck.

“It is completely untrue,” Figo responded. “I want [Libero] to apologise otherwise I will be obliged to take legal action.”

As it was, most Inter fans were actually pretty happy with Figo. Not because of the cat business but because of the player’s professionalism and largely excellent performances over three seasons in Italy.

Another person definitely not disgusted with Figo was president Moratti, the man in charge. And it was Moratti’s loyalty to the midfielder that may have ultimately led to another significant event that month.

With Figo due to begin his ambassadorial work with Inter that summer, the sacking of Mancini gave him food for thought.

But when Jose Mourinho was announced as the new Inter manager, the club did not find it difficult to coax their skilful veteran into a fourth and final season.

Figo actually played more in 2008–09 than he had during Mancini’s final campaign. And though mostly used from the bench, he enjoyed his new role under Mourinho, helping the club to its fourth consecutive league title and laying the foundations for bigger glories still to come.

He scored his final goal for the club, a leaping header, in February 2009 during a 3-0 win against Lecce, and on his last ever appearance he was given the captain’s armband by Javier Zanetti.

Few players could command such respect over such a short period.

Figo’s perfect record of four Serie A medals in four years — his last won at the age of 37 — are a testament to his ability and dedication right up to the end.

What’s shocking is that, had Al-Ittihad got their way and signed Figo in January 2007, he might have left Italy with just one.

Maybe the collapse of that move was a stroke of luck. But it wasn’t one gained by sinister means: in 2012, Vittorio Feltri admitted that the black cat story was nonsense.