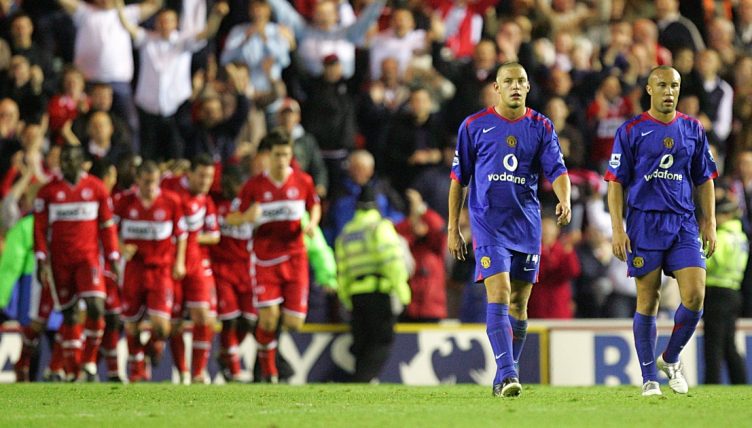 “I have seen that happen to Rio before,” Roy Keane uttered over footage of Ferdinand impersonating a complacent Victorian gentleman having his wallet pinched by Jimmy Floyd Hasselbaink.

“It is poor defending. Just because you are paid £120,000 a week and play well for 20 minutes against Tottenham you think you are a superstar.”

The decision by MUTV, the in-house media channel of Manchester United, to ask Keane to ‘Play the Pundit’ after their 4-1 shellacking at Middlesbrough in October 2005 would prove to be one of the more ill-conceived in football history.

Keane, who was injured at the time, ripped into his team-mates with all the subtleness of a Brian Blessed whisper.

“He should have saved that,” the Irishman observed of Edwin van der Sar’s effort to prevent Middlesbrough’s first goal. “That was saveable.”

“He is a lazy defender who deserved to get punished. He wasn’t doing his job,” Keane commented about Kieran Richardson, picking a splinter from his backside and shifting uncharacteristically off the fence.

Perhaps the most cutting line, which would have sold like hotcakes if printed on tees and sold outside Old Trafford at the time, was: “I can’t understand why people in Scotland rave about Darren Fletcher.”

“There was always a chance it was going to come to this,” Gary Neville said in 2018, reflecting on the day United’s stars gathered with Sir Alex Ferguson and his staff to watch Keane’s hastily-pulled interview.

It was an attempt to clear the air. You somehow sensed that chucking a box of live hand grenades into the room would have had more chance of achieving that.

Keane stood his ground, especially when Van der Sar observed that Keane might have used a different tone. All hell was let loose.

Writing in his autobiography, Ferguson said: “What I noticed about him that day as I was arguing with him was that his eyes started to narrow, almost to wee black beads.

“It was frightening to watch. And I’m from Glasgow.”

There’d be no way back for Keane. He was fined £5,000 and had his contract torn up just weeks later. His relationship with Ferguson has never healed, with both men presumably happy to take their differences to the grave.

Yet the match that drove Keane to the cliff edge has been rendered collateral damage by his explosive departure from Old Trafford.

It was perhaps peak-Middlesbrough under Steve McClaren; an expensively assembled team, who were often less than their sum-of-parts, turning in a fine performance against one of the Premier League elite – seemingly on a whim.

Two goals from Gaizka Mendieta, supplemented with strikes from Hasselbaink and Yakubu, effectively eliminated United from the title race before the clocks went back.

While United were genuinely dreadful that night in the North East, their deficiencies were accentuated by an opportunistic Middlesbrough who didn’t deserve to have their performance sidelined by the Stretford soap opera.

Even so, their opponents were in the midst of an extended funk at the time

United were at arguably their lowest ebb of the Premier League era – under Ferguson at least – when they travelled to the Riverside Stadium on Halloween weekend.

Add in the fallout from the Glazer takeover, which had gone through six months earlier, and the mood around Old Trafford was toxic. Chelsea were streaking ahead of the pack once again and questions were being asked of Ferguson’s capability of reviving United’s fortunes.

It took two minutes at Middlesbrough for the gloom to deepen. Mendieta sent United reeling when he collected a pass from Emmanuel Pogatetz and hammered his shot past Van der Sar.

The goalkeeper was celebrating his 35th birthday and, as he lifted himself off the turf, looked like he’d rather be back in the dressing room eating a cake made from excrement.

Boro’s second also asked questions of the birthday boy. Once again Mendieta was involved, firing a 50-yard cross-field pass towards Hasselbaink, who robbed Ferdinand of his soul before tucking the ball past his countryman.

Ferguson, alarmed by United’s lack of creativity, replaced Phil Bardsley with Richardson. Within minutes, he’d conceded a penalty for a mindless grapple that suggested the youngster had mistaken the Riverside for Tiger Tiger.

Yakubu dotted the I’s and crossed the T’s. Back in Manchester, one presumes Keane was busy buffing his Gurkha knife.

You’d have expected Ferguson to have torn into his charges at half-time but, if their second-half display was any indication, then the hair-drying facilities in the away dressing room left plenty to be desired.

Yakubu set up Mendieta to make it 4-0, and a late Cristiano Ronaldo header did nothing to take the shine off Boro’s victory. It left United 13 points behind Chelsea, squinting into the distance as Jose Mourinho’s side disappeared from view.

Four days after the defeat, United were beaten by Lille in the Champions League and some of the players were barracked by the incensed away support. Ferguson laid the blame with his injured captain.

“The nature of the man you can expect that, that is the personality he has,” he wrote about Keane’s departure in his 2013 autobiography.

“But the reason was I had to explain what happened. It happened so quickly. He criticised his teammates. We could not release that video. It ended up with two young players being booed in Paris [in the game against Lille] on the Wednesday.”

Keane has spoken of two regrets from that time: apologising and that the show was never aired.

Speaking at an event in Limerick in 2017 he said: “I wished they played this video, it is propaganda, ‘we had to destroy it’. How do you even destroy a video? I left with my head held up high, I was fine with my actions, I always felt my intentions were to do the best for Man United.”

"What did they want me to say? That the team played well, they were poor, the tape had to be destroyed, what a load of rubbish, was a bit of propaganda!" 🤣

Plenty of United players have defended Keane in the years since. Writing in his Sunday Times column, Wayne Rooney said: “Roy was supposedly too critical of his team-mates but I’ve watched the video and there’s nothing wrong with it at all.

‘He said that players can’t pass the ball 10 yards and they’re playing for Manchester United and it’s not good enough. Well, he’s right.”

Even Fletcher, who felt the lashing of Keane’s iron tongue, later told the UTD podcast: “It is something that hung around me for a long time, the fact that Roy Keane didn’t like you and didn’t rate you.

“But, for me, it was the complete opposite. I knew that Roy Keane really liked me.

“He challenged me and was hard on me, 100 per cent, but that was his way of making me a Manchester United player, manning up. The personality and the leader that I became was off the back of that grounding and that schooling.”

The nuclear fallout overshadowed one of Middlesbrough’s finest performances of modern times – but how could it not?

Especially when this Halloween horror show would be the straw that broke Keane’s back.