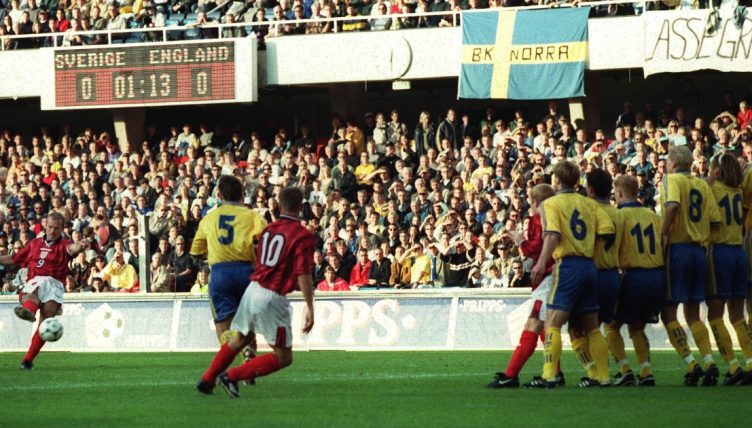 When Steph Houghton scored an indirect free-kick for England against Cameroon at the Women’s World Cup in 2019, many fans’ minds instantly turned back 22 years.

The roll back, the full team of players assembled on the line, the ability to find the corner anyway… it could only remind us of one thing.

When you add in the instinctively raised right arm, it was impossible for Houghton to not remind us of an Alan Shearer strike more than two decades earlier.

England’s opponents at Wembley in April 1997, Georgia, were embarking on their first World Cup qualifying campaign as an independent nation.

They’d given a good account of themselves in Euro 96 qualifying, thanks in no small part to Georgi Kinkladze, but England had already won in Tbilisi thanks to goals from Teddy Sheringham and Les Ferdinand.

Sheringham opened the scoring in the return game, too, but things were still a little too close for comfort going into the final minutes.

Rob Lee came close to a second when his shot was pawed away by goalkeeper Irakli Zoidze, and seconds later there was a fantastic chance for England as a defender touched the ball back to the Georgian stopper, who picked it up.

An indirect free-kick from inside the box is never a sure thing, but when Alan Shearer is involved you’ve got to fancy your chances.

When Sheringham rolls the ball back to Shearer, the closest Georgian defender cannot be more than two yards away.

It’s not even that they haven’t been warned about this sort of thing; seconds earlier, Murtaz Shelia has been shown a yellow card for encroachment, but perhaps referee Rémy Harrel recognises – accurately – that Shearer doesn’t need the opposition defence to be a full 10 yards back.

He’s right, of course. The velocity of Shearer’s drive threatens to rip the net asunder, taking with it the heads of anyone stupid enough to get in the way.

It’s as if the net forces itself to expand to protect the vulnerable fans behind the goal, who would surely have themselves been decapitated if exposed to the drive without such protection.

The desperate slides and dives add to the spectacle, of course, but as he peels away he has the look of an action hero, fresh from ousting a villain’s henchman with a grenade and escaping his lair with a trail of destruction in his wake.

The trademark celebration – right arm outstretched, beaming grin on his face – is so instantaneous it almost feels like part of the shot itself. 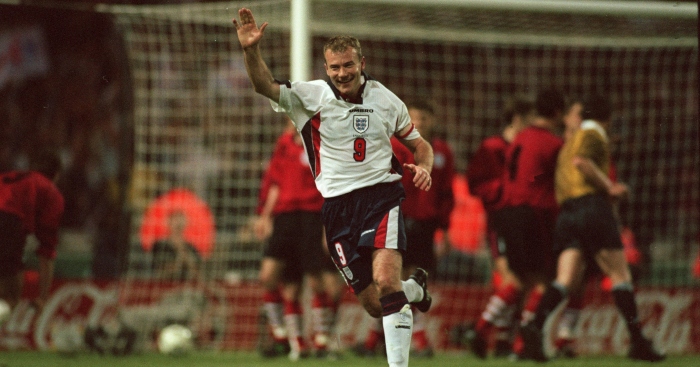 Shearer scored plenty of free-kicks after that point, albeit none from such close range.

You might think an increased distance from goal would make it hard to find the same blend of power and restraint, keeping the ball under the crossbar while retaining enough destructive force to make anyone nearby think twice about getting in the way.

More than five years on from that England goal, Manchester United were on the receiving end of a Shearer thunderbolt. Again, the ball was rolled to him before he connected with it. Again, it flew into the top-right corner.

Apart from that, though, the two strikes couldn’t have been more different. 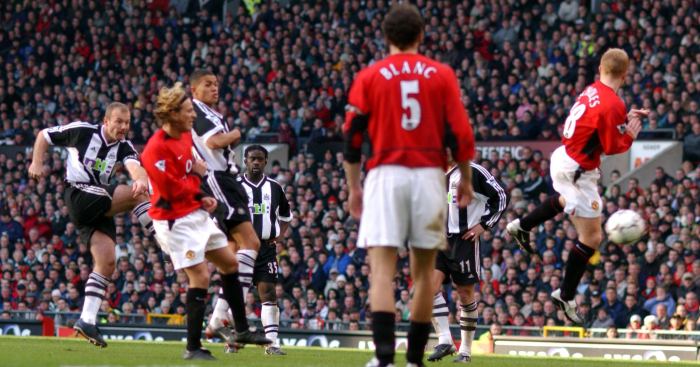 As Shearer prepares to unleash what feels like a century of bottled-up anger, we can see Craig Bellamy and Paul Scholes tussling on the edge of the Manchester United wall.

Bellamy is effectively blocking off his opponent, but giving Shearer more of the goal to aim at is only part of the Welshman’s objective.

He’s also, whether he knows it or not, protecting the Englishman. He’s straining, John McClane-style, to push Scholes out of the path of a missile destined to wipe him out with a single suggestion of contact.

Shearer’s strike is powerful enough that the wind it creates as it rushes past you is enough to blow you off your feet, so imagine what it would be like to be hit by one of these.

Free-kicks like these can still be found if you look hard enough, but the days of Shearer, Siniša Mihajlović and others making a habit of near-lethal strikes feel like a thing of the past.

Sure, other elements of professional football might be more developed, but don’t you miss that just a little bit?