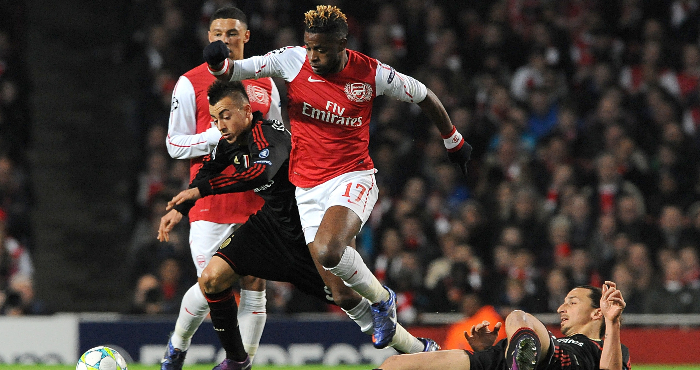 When Cesc Fabregas left Arsenal in the summer of 2011, having set up at least 15 goals in each of his final four seasons, many fans wondered who could fill the creative void left by the Spaniard. Step forward, Alex Song.

Having joined the club in 2005, Song had established himself as a key man in Arsene Wenger’s side by the start of the 2010s, anchoring the midfield and shielding the back four.

However, given his lack of defensive discipline, or any discipline at all for that matter, and his ability on the ball, he had always seemed suited to a more creative role. Following Fabregas’s departure, he finally took on such a role, and it was glorious.

Starting with a stamp

Granted, it didn’t get off to the best of the starts. In the first game of the season, he got into trouble for stamping, but look, we warned you about his lack of discipline. The stamp was on Joey Barton, so in our eyes, it’s fair game, but the referee didn’t see it that way and sent him off, landing Song with a three-match ban.

On the bright side, it did mean he missed Arsenal infamous 8-2 defeat at Old Trafford.

Song’s return against Blackburn was a mixed bag, to say the least. He claimed his first assist of the season with a perfect through ball for Gervinho, but he also scored an own goal which, when your team ends up losing by one goal, is pretty costly.

He scored at the right end in his next game, however, firing into the top corner from the edge of the box against Bolton in a 3-0 win before getting two assists against Olympiakos and Spurs, the former a beauty of a lofted ball from the halfway line.

Yet another assist, this time a through ball for Andre Santos, in his side’s completely mental 5-3 win against Chelsea, and all-round impressive performances ensured he was named one of Arsenal’s players of the month in October. And the best was yet to come.

Sometimes in football, players strike up near-telepathic connections. Xavi and Iniesta, Gerrard and Torres, and for a few months, Song and Van Persie. So much so that the midfielder’s next three assists would all be for the Dutchman, and they were all bloody brilliant.

The first came against Norwich, in which Song pounced on a loose ball, drove forward and played Van Persie in on his right. The striker, of course, finished the chance, scoring what proved to be the winning goal.

Things got even better in the next game against Borussia Dortmund as Song channelled his inner Maradona. No, really.

Receiving the ball on the left by the halfway line, he decided he was more than capable of taking on three opposition players alone.

He did just that, leaving one on the floor and humiliating the other two with a move that El Diego himself would have been proud of before sending in an inch-perfect cross for Van Persie to convert.

Two weeks later he provided a less surprising but equally as impressive assist.

With the scores locked at 0-0 against Everton, Song looked up and played a ball over the defence and into the path of Van Persie, who scored what turned out to be the goal of the season.

Thierry Henry, set to return to the club, watched from the stands and applauded, surely hoping he’d be lucky enough to receive the same kind of service.

He was. The Frenchman came on against Leeds in the FA Cup and famously scored the winning goal, but who was it that set him up to do so? Yep, it was that man Song yet again.

At this point, allowing him space anywhere in the opposition half was as dangerous as Henry being through on goal. Well, not quite, but you get the point.

We made it pretty far without making any kind of pun around his name, but we just couldn’t resist any longer. Sorry. Anyway, after over a month of steady performances but no assists, Song returned to his playmaking ways, ending the season with six assists in the last 12 games.

The first of them was a classic through ball from deep against Spurs, setting up Theo Walcott to seal a 5-2 victory for Arsenal.

He then returned to supplying his old buddy Robin again with the two combining in stoppage time against Liverpool for the Dutchman to score a goal near identical to the one against Everton.

Song had not only become the side’s chief creator but also, along with Van Persie, the man who stepped up in the big moments.

With their side 2-1 down against Norwich in the penultimate game of the season, in which a loss would be disastrous for their hopes of Champions League qualification, the duo brought out their classic lob and volley combo yet again. Seriously, what would the team have done without them?

Song got his final assist for Arsenal in their last game of the season, taking his tally for 2011-12 to 14 in all competitions. In the following transfer window, Barcelona came calling and he answered, leaving for a fee of £15million.

Perhaps his decision to leave was influenced by his partner in crime leaving for Manchester United, or perhaps he, like the man he had replaced as Arsenal’s creative force, simply couldn’t resist the lure of the Blaugrana. Either way, it turned out to be a decision he’d regret.

With Sergio Busquets occupying the holding midfield role at the Nou Camp, Song was either benched or put at centre back, shackling his creativity. The fact that he’s best remembered in Spain for the painfully awkward moment when he thought Carlos Puyol was handing the La Liga title to him and not Eric Abidal says it all.

He’d go on to return to London, joining West Ham, but failed to recapture his old form. These days, he’s playing in *checks notes* Djibouti.

A poor attitude and lack of discipline (who can forget that World Cup elbow on Mario Mandzukic?) look to have deprived him of a career at the top that 2011-12 suggested he was destined for, but hey, no song is perfect. Again, sorry.

Tomáš Rosický, Arsenal’s big-game hero who could have been even more