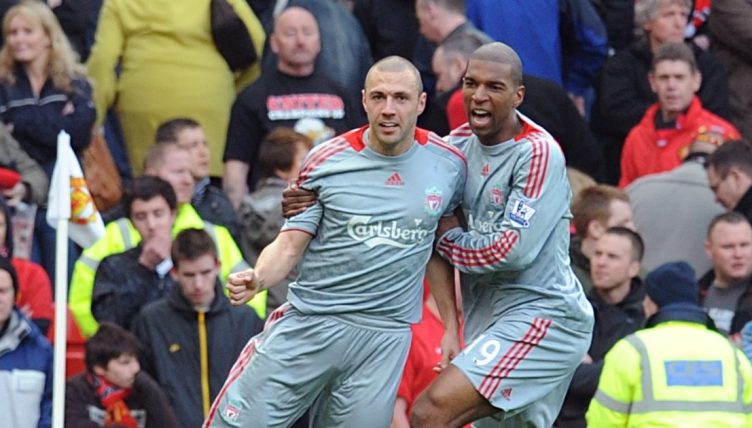 Andrea Dossena only had one and a half seasons at Liverpool. But his most important contributions occurred over a much shorter timeframe.

Non-scoring footballers would do well to follow an important rule: if you’re not going to score many goals, make sure the goals you do score are good ones.

For most, this means one thing: making those rare strikes as visually impressive as can be.

Lots of players, consciously or not, have adhered to such a principle. Former Blackburn midfielder Tugay Kerimoğlu, for example, scored just 11 league goals for Blackburn over eight years, but each one was an absolute peach.

Every Tugay strike packed the thrill of 10 regular goals – his was a discography more Lauryn Hill than Bob Dylan; quality over quantity, rewarding fans for their patience in the most generous way possible.

For others, scoring the occasional ‘good’ goal means something else.

Andrea Dossena didn’t score many goals for Liverpool. In fact, he scored two. Un doppio. The same number that adorned the back of his shirt. 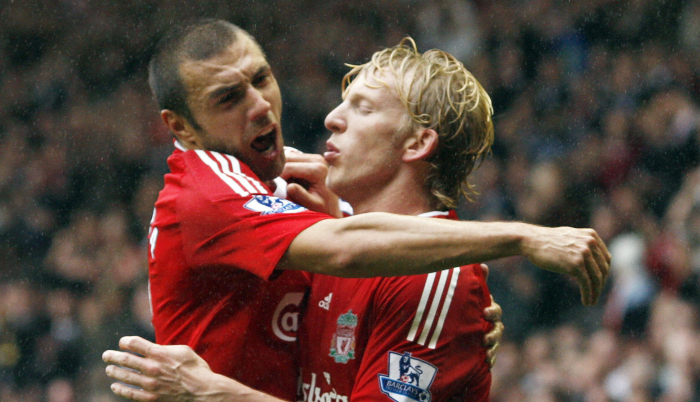 But those two goals didn’t come in a League Cup tie against West Brom. Nor did they come in an unremarkable 2-1 victory over Stoke, shown second from last on Match of the Day as an increasingly unenthused audience pondered going to bed.

Andrea Dossena didn’t score Tugay-esque ‘wondergoals’, of course, but nor did he score forgettable, inconsequential ones.

Andrea Dossena did something different. For four days in March 2009, Andrea Dossena was a goalscorer, an icon and a Kop cult hero.

Dossena endured a slow start to life at Liverpool.

Signed in the summer of 2008 as a replacement for the departed John Arne Riise (another player who only scored great goals but who, impressively for a left-back, actually scored a ton of them), the little-known Dossena didn’t promise a great deal and actually delivered even less.

Not that that was unusual at the time. With Philipp Degen, David N’Gog, Robbie Keane and Albert Riera all joining around the same time, Rafael Benitez orchestrated one of Liverpool’s worst transfer windows of the era – almost as bad, perhaps, as Roy Hodgson’s recruitment of Joe Cole, Christian Poulsen and Paul Konchesky two years later.

By November 2008, Dossena was being publicly contrite for his slow start. “I am not fully happy with my level and, with Fabio [Aurelio] in my position, the manager has the option of a player more in tune with the tactics of the team right now,” he told The Guardian.

But the humble and strikingly honest full-back was more or less happy with his lot.

“Eighteen months ago I would not have expected to be playing for one of the most famous clubs in the world,” he said. “I do not have silverware in my collection in my career but signing for Liverpool I have a real chance to win medals in every competition we enter.”

The superiority of Fabio Aurelio was a blessing in disguise for Dossena; though the Italian was relegated to the bench, it was from there that he would make his two greatest contributions to the Liverpool side of 2008-09 – contributions that would (sort of) justify his £7million transfer fee and earn him a place in the hearts of Kopites far and wide.

It was from the bench that Andrea Dossena scored against Real Madrid.

Liverpool went into their second-leg, last-16 tie against Madrid with a slender 1-0 advantage.

Two weeks prior, Benitez’s side had stolen an away victory against the Spanish giants – playing out their final season of the pre-Ronaldo era – courtesy of a late header from Yossi Benayoun.

Although this was far from a legendary side of Galacticos, a slow defence of Jamie Carragher and Martin Skrtel was up against Raúl, Gonzalo Higuaín, Arjen Robben and Wesley Sneijder. It could have gone either way.

As it happened, it went Liverpool’s way – massively. Wasn’t even close. Madrid got a schooling.

By the 47th minute, it was 3-0 to the hosts, captain Steven Gerrard adding two goals to Fernando Torres’ opener, and it wasn’t long before Liverpool got the chance to showboat – not with tricks, but with substitutions.

In the 73rd minute, 20-year-old Jay Spearing came on for Gerrard; 10 minutes later, Torres was swapped for the heretofore underperforming Dossena, on as an auxiliary left-winger.

Close out the game, Andrea. Keep it simple. Keep an eye on Sneijder. Hold your position.

Five minutes after coming onto the pitch, Dossena tucked in a Javier Mascherano cross to score his first ever goal for the Reds – his first of, yes, two.

Anfield roared. Gerrard and Torres, both tracksuited in the stands, exchanged lively words. Had Mascherano and Dossena, of all people, just taken their jobs?

If Andrea Dossena ever gets struck by lightning – touch wood (but not a tree in an elevated area) that he doesn’t – he should be very f**king wary of getting struck again, right in the same spot.

Because just four days after his Real Madrid cameo, Dossena did it again. Verbatim. A clone.

Only this time the satisfaction was even greater. This time Dossena wasn’t just putting the cherry on the cake or the salt in the wound, but actually carving out a place for himself in the annals of Merseyside folklore.

It was a good four days for Liverpool. Following the demolition of Madrid, it would have been easy to suffer from fatigue, or even an emotional comedown.

Only two players who started the Champions League tie – Alvaro Arbeloa and Xabi Alonso – would miss the game against Man United at Old Trafford.

This team, by all reasonable expectations, should have been knackered.

But Liverpool picked up exactly as they left off, responding brilliantly to an early Cristiano Ronaldo penalty by going into half-time with a 2-1 lead, the goals again coming from Torres and Gerrard.

The second half was mayhem. In the 76th minute, Nemanja Vidic pulled down Gerrard on the edge of the box and received a straight red card, resulting in a free kick that was beautifully converted by Aurelio, the man keeping Dossena on the bench.

But by this point, the Italian understudy had been sent into the fray alongside his Brazilian team-mate, again as a left-winger, again with a glint in his eye.

In the first minute of stoppage time, Dossena — the most advanced Liverpool player on the pitch — attempted to get hold of a monstrous goal kick from Pepe Reina.

The ball bounced once, evaded a floundering John O’Shea and falling into the path of the sprinting Dossena.

Just outside the box, the Italian super-sub calmly volleyed the ball over the head of Edwin van der Sar to make it 4-1.

Dossena, seemingly with a bemused look on his face as he was mobbed by his team-mates, had become a four-day, two-goal hero.

He would do little else at the club, but God knows he didn’t need to.