Tuesday December 11, 2012, under the lights at a packed-out Valley Parade, with Bradford City pitting their wits against a strong Arsenal side. The prize? A place in the League Cup semi-finals. A team sitting fourth in League Two, that cost just £7,500 to assemble, facing up to one of England’s most illustrious clubs.

Only one outcome, right? But with Bradford already exceeding expectations well beyond their wildest dreams, it was going to take some stopping a side playing with so much passion and belief.

What had already been a miraculous cup run for Phil Parkinson’s men was about to become even better and would ensure he and his players will forever remain in Bradford folklore.

Fifteen minutes in, Garry Thompson guided home a cultured left-foot volley to send the home fans into raptures. It took 73 minutes for Arsene Wenger’s men to hit back, with Thomas Vermaelen breaking Bradford hearts with an equaliser three minutes from time.

For a side boasting the likes of Santi Cazorla, Aaron Ramsey and Lukas Podolski, 30 extra minutes seemed like an eternity for the home side. But as the clock ticked on, they clung on heroically to take the game to penalties.

With Bradford successful in all of their eight previous shootouts, was there ever any doubt they were going to make that nine? Matt Duke’s save from Cazorla’s spot kick, and misses from Marouane Chamakh and Vermaelen saw the Bantams over the line now believing anything was possible – if they weren’t already. 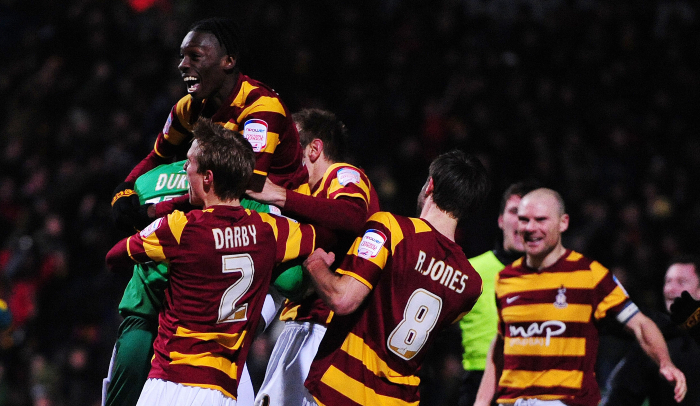 The West Yorkshire side’s journey to the final had rarely been short of incident, with three of their four victories prior to the Arsenal fixture coming against sides in a higher division. Their first-round victory over League One Notts County was followed up by a remarkable 2-1 triumph over Championship side Watford, with an 84th-minute Kyel Reid equaliser preceding an injury-time winner from Thompson.

They were fast becoming the giant killers, but it was League Two Burton that caused Parkinson’s men the most problems. With the Bantams two goals down with just 10 minutes to play, their competition looked to be over. A brace from Nakhi Wells and an extra-time winner from Stephen Darby kept the dream alive and a tie away at Premier League Wigan Athletic awaited.

It was their never-say-die attitude that got Bradford to this point, and they managed to take the Latics to penalties following a goalless draw. A 4-2 victory in the shootout saw Bradford knock out a Premier League side in the competition for the first time since 1995, and that was just the beginning of what was to come.

With European football on the horizon for a League Two side, Bradford’s cup run was turning heads across the whole country, and one thing was for sure, they weren’t about to let it end just yet.

The semi-final stage was to pose the most monumental task for the Bantams in their run so far, a two-legged tie, in which they would have to try and negotiate their way past Aston Villa over 180 minutes. But the first 90 minutes at Valley Parade didn’t just have Bradford holding their own, they were now clear favourites to go on and reach the final.

Wells struck the opener, pouncing on a loose ball in the box, before their centre-back partnership of Rory McArdle and Carl McHugh netted a header apiece, either side of an Andi Weimann strike for the away side, giving Bradford a 3-1 lead at the halfway point of the tie.

A Wembley appearance was suddenly an all too real proposition for Parkinson’s men, and the most important 90 minutes in most of their players’ careers was all that stood between Bradford and a remarkable achievement. Prepared to face a relentless barrage of attacks from Villa, Bradford were forced to display the spirit and determination that had got them to this stage.

Christian Benteke netted the opening goal on the night, but the headlines were stolen by striker James Hanson, who preyed on Villa’s defensive frailties from set-pieces to head home the leveller and send the Bantams supporters into dreamland.

Weimann struck again for the hosts, but Bradford clung on to secure their spot at Wembley to face Swansea. It was a modern-day miracle, the side currently placed 81st in the English football pyramid, in the final of one of England’s major cup competitions. Even the wildest of optimists would have struggled to foresee that happening. 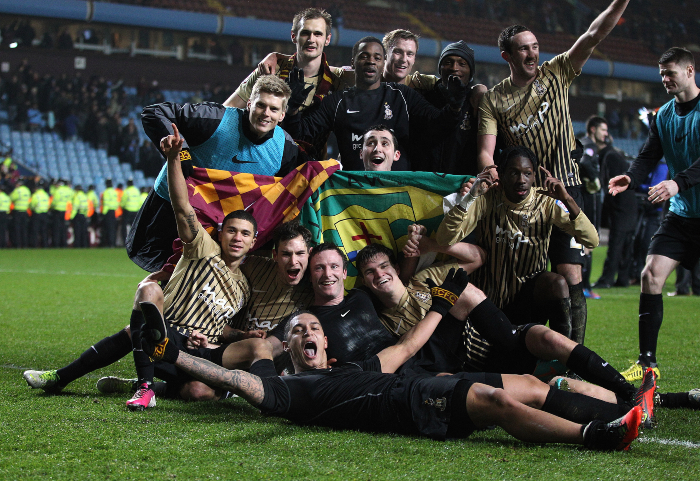 In an increasingly financially-driven sport that continues to be divided between the haves and have-nots, the Bradford squad of 2012-13 proved that sheer determination and gutsy spirit can go a long way if everyone pulls in the same direction.

Duke is one name that will always crop up when reminiscing about Bradford’s run. His heroics against Arsenal and Villa, as well as in the early rounds when his side faced attack after attack, rescued his side on numerous occasions throughout the competition. With the pairing of McArdle and McHugh in front of Duke, the spine of their side was incredibly difficult to break down.

Supported by a midfield two of Gary Jones and Nathan Doyle, Bradford were well equipped in the engine room, determined to thwart any players that they came up against.

Many will recall Hanson and Wells’ contributions as two of the prolific members of that side, but as a collective Bradford’s spirit that year was unrivalled, and but for an outstanding Swansea City performance under Michael Laudrup, they would have found themselves with the most unexpected piece of silverware in recent years.

End of the road

The fairytale run wasn’t to end as they would have dreamed, as Bradford slipped to a crushing 5-0 defeat at the hands of the Swans. Braces from Nathan Dyer and Jonathan De Guzman, plus a goal from Spaniard Michu, were enough to finally end the Bantams’ journey at the final hurdle. 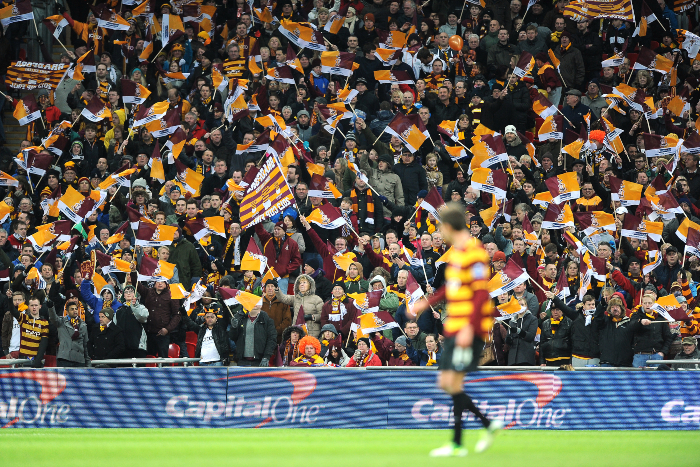 Following that run in 2012-13, Bradford provided one of England’s biggest cup shocks since, winning 4-2 at Stamford Bridge against Chelsea in the FA Cup after coming from 2-0 down.

For all the cup upsets that have taken place since their incredible 2012-13, no club has sustained a run of victories quite like Bradford.

It was a campaign that ended with Wigan winning the FA Cup; the magic of the cup was well and truly alive in England.

All good fairytales must come to an end, but this one just seemed to continue game after game, and one place it will always remain is in the memories of Bradford City supporters.