Remembering the Chelsea team of 96-97 that changed English football 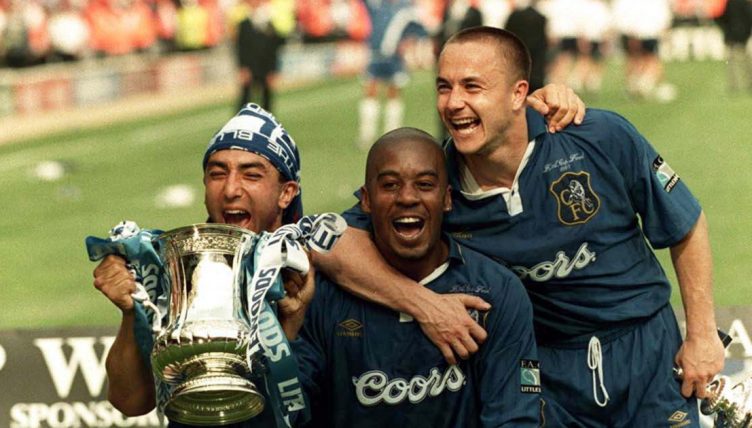 On May 17, 1997, Chelsea beat Middlesbrough to win the FA Cup, their first major honour since 1971. Times were changing…

In the run-up to the game, Chelsea fan and still-relevant musician Suggs released ‘Blue Day’, the west London club’s official FA Cup final song ahead of their victory at the old Wembley Stadium.

The Madness frontman is joined in the video by a squad of Blues players, each with varying degrees of enthusiasm, all watching on as he sings: “We’ve got some memories, albeit from the seventies.”

Looking at Chelsea these days it seems bizarre to think that – just two decades ago – they were a team still waxing lyrical about past glories.

The ‘you ain’t got no history’ accusations may be wide of the mark, but they weren’t close to the team they are today.

While the Abramovich era saw a switch flicked in the Chelsea narrative, it wasn’t quite the instant zero-to-sixty move revisionists might have you believe. Indeed, the first influx of investment and talent came more than half a decade earlier, with the arrival of striker-turned-sweeper Ruud Gullit.

The first few years of the Premier League saw Chelsea establish themselves as a mid-table side, but Gullit’s move to player-manager – and the personnel changes it produced – was a turning point.

Gullit took over from Glenn Hoddle at the start of the 1996-97 season, and within months the club had made the shift from an English club into a European one.

Out went Paul Furlong, John Spencer and Gavin Peacock; in came Frank Leboeuf, Gianluca Vialli and Roberto Di Matteo, with Gianfranco Zola joining the squad before the turn of the year.

It was a watershed year for the club, with a sixth-placed finish and an end-of-season tally of 58 goals, their highest since Division One became the Premier League. In over two decades since, they have finished lower only once.

Before the Chelsea revolution, if you spoke to someone about foreign stars in the Premier League, chances are you’d have been talking about Scandinavian internationals.

Chelsea fielded the first ever all-foreign Premier League XI in December 1999, but three years earlier they still had a Nordic and English core.

Erland Johnsen had been with the club since the late-1980s, while fellow Norway international Frode Grodas would join as one of Gullit’s first signings and go on to start the 1997 cup final.

And half of that matchday 14 was British – more than half if you include London-born Jamaica international Frank Sinclair. 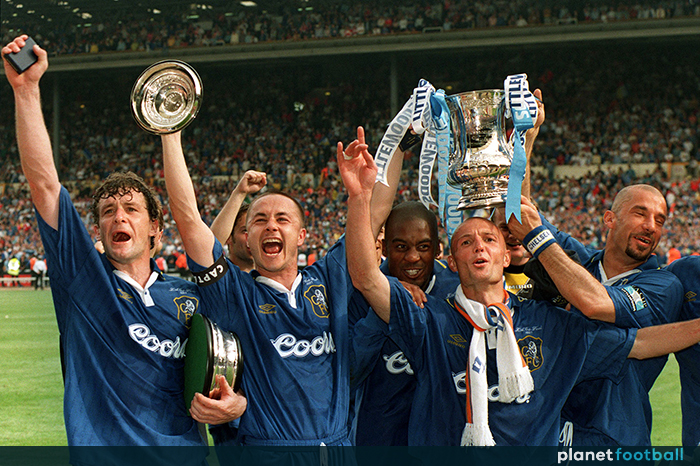 In that sense, the Blues reflected the norm in the Premier League: 15 of the 20 clubs in the 1996-97 season had at least one Scandinavian in their squad, and three of those who did not – Coventry City, Newcastle United and Sheffield Wednesday – all signed Swedish internationals during the following campaign.

Most of the throwing-around money was still overseas – Newcastle’s £15million deal for Alan Shearer was the first time in more than 40 years that an English club had broken the world transfer record and wasn’t topped until Juan Sebastian Veron joined Manchester United five years later.

That meant teams didn’t have to splash the cash to merely compete and could balance speculative signings from abroad with a homegrown approach that could be justified by Manchester United shooting down Alan Hansen’s claim about winning nothing with kids.

Chelsea’s squad at the time was not too dissimilar to others in terms of the nuts and bolts, with players from different backgrounds coming together to form a group that often clicked brilliantly, like a beautiful accident.

If other teams took the form of mismatched groups of schoolchildren brought together by circumstance, Gullit’s squad was a cartoonish version of the same: the Recess to the rest of the Premier League’s Grange Hill.

Weirdly, it was their opponents in the 1997 final, Middlesbrough, who could be accused of being the ‘new money’ club at the time.

Chelsea had spent big themselves, no doubt, but chairman Ken Bates had been at the helm for more than a decade.

By contrast, Boro had been taken over by Steve Gibson just a couple of years earlier, with the local businessman investing heavily and quickly to bring the likes of Juninho, Branco, Emerson and Fabrizio Ravanelli to the shiny new Riverside Stadium.

Had Boro not been relegated in May 1997, we might have been speaking of both clubs’ English hangover – a core of players good enough to hold down squad positions and complement the foreign flair.

Indeed in that sense, both clubs epitomised the first wave of Premier League money, where a combination of new-found wealth and a background of several years without European competition resulted in a disparity between the best and worst players comparable at times to Major League Soccer today.

And if any clubs could be considered England’s first MLS franchise, Chelsea and Boro would certainly be in the conversation.

Still, to use this description as a cover-all for the Blues’ British talent would be unfair.

Sure, useful-but-limited first-teamers like Eddie Newton and Craig Burley were accompanied by the likes of Mark Nicholls and Andy Myers, relics from a time where Chelsea’s youth products went straight into the first team without first finding their feet at Borussia Monchengladbach or Vitesse.

READ: Scott Minto: ‘Everything we did under Ruud was good football’

There were also, however, far more established figures like Dennis Wise and the prototype Jack Wilshere that was Jody Morris.

There may be a few Blues fans who have the occasional pang of disappointment at the way homegrown players of Morris’ quality no longer tend to break into the first team, but others will surely be relatively happy with the trade-off for league trophies, even if it means fewer opportunities for the Loftus-Cheek/Chalobah/Abraham generation.

Chelsea’s first Premier League title under Jose Mourinho sits at the midpoint between now and the advent of the Premier League/Champions League era, and to look back at the development of the English game in that early stage (or even the period leading up to the first English name on the Champions League trophy in 1999) paints an interesting picture.

With relegation lacking a doomsday element in the 1990s, and with fewer European places on offer, teams were freer to expand and experiment without the fear of too many rivals stealing a march to the point that the ground could not be made up.

While now we might see clubs just outside the Champions League places consistently try to ‘level up’ when it comes to managerial talent, the Blues had the luxury of time to give untested names like Gullit and then Vialli a chance to cut their teeth in the dugout – even if it led to them occasionally being cut open, as was the case in their FA Cup defence the following season.

It was the equivalent of a child trying out his new toys at once, letting them do what felt right, even if it wasn’t what was in the instruction manual. It didn’t always work, but when it did it was fun as hell.