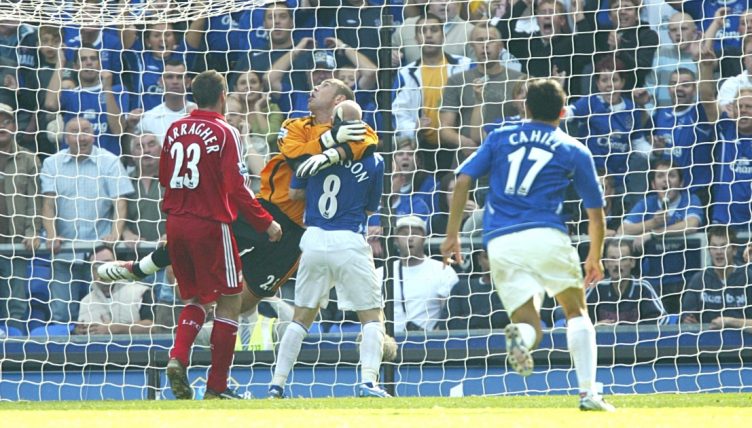 With domestic and European fixtures to contend with, Benitez — then manager of Liverpool — fielded a not-fully-fit Jamie Carragher in the Merseyside derby, allowing new Everton signing Andrew Johnson to embarrass Carragher and score twice.

The Toffees ran out 3-0 winners over their rivals, putting them briefly top of the league.

The win was one of Everton’s greatest of the 21st century: a fine showcase of David Moyes’ pragmatism and a game that put Carragher “in a daze” (until Steven Gerrard slapped him out of it).

Of course, Liverpool would end up celebrating more often over the following 16 years, while Johnson would only score a brace on one further occasion for the Toffees — in a rather less cathartic win over Norwegian side SK Brann.

But Everton’s victory, one of the high points of the Moyes era, has become the stuff of legend.

Everything was going right for Everton in September 2006.

The team had seven points from its first three games of the season, and new signings Tim Howard, Andrew Johnson and Joleon Lescott all looked like good bits of business.

So when Liverpool made the short journey to Goodison on Saturday 9 September, Everton were quietly confident, despite having lost their previous three derbies — dramatic games that had produced a total of five red cards.

And when Benitez rushed a barely fit Jamie Carragher back into the Liverpool starting XI ahead of Daniel Agger, an opportunity presented itself.

Liverpool started the better when the re-signed Robbie Fowler had a half-chance within 10 seconds. But it wasn’t long before Everton’s confidence began to show, with new arrival Johnson using his pace to trouble Carragher and Sami Hyypia.

Everton took the lead in the 23rd minute with a typically Moyesian combination of skill and directness: Mikel Arteta floated in a dangerous cross that was flicked on by Lee Carsley; Leon Osman and Liverpool’s Steve Finnan challenged for the ball and fell in a heap; then Tim Cahill slid in unmarked to beat Pepe Reina.

When Cahill picked up the ball, the hapless Carragher was marking Hyypia instead of an Everton player.

Steven Gerrard hit the post not long after, but Andy Johnson made it 2-0 following an even worse Carragher mistake. Rushing over to cover Hyypia, the England defender jumped straight over the ball, allowing Johnson to collect and calmly score at the near post.

🔵 @Tim_Cahill lists Steven Gerrard, Jamie Carragher (@Carra23) and Xabi Alonso (@XabiAlonso) as his favourite players to go up against in the Merseyside derby.#EFC pic.twitter.com/ti6uqNwrqL

“When we were all sitting there for dinner, all I could think about was my poor performance in the game,” Carragher would reveal a decade later in his Telegraph column.

“We had lost heavily and I felt like I was to blame… I could not concentrate on doing anything. I was in a daze. As we say in the game, my head was gone.”

It would take Gerrard texting him “Forget about it” to ease his nerves.

Benitez also attempted to defend the defender, though without much conviction: “I think he was okay,” said the Spaniard. “But it’s not just one player to blame in the defence.”

Liverpool came out stronger in the second half. However, a highly organised Everton were still able to enjoy themselves whenever they gained possession. Gerrard hit the woodwork a second time, but left-back Gary Naysmith had a double-chance to make it 3-0.

And that scoreline was eventually achieved on the brink of full time when Reina did his best impression of a fielder stopping a six on the boundary, parrying a long-range Carsley strike and fumbling the ball straight to Johnson.

The poacher celebrated by signalling the 3-0 scoreline with his fingers, writing himself into Everton folklore.

“Andrew Johnson is an unbelievable striker and is going to get goals,” Moyes said after the game. “He fought hard and showed character and now he knows what it means to be a blue.”

Everton fans had every reason to celebrate. Not only had they recorded their biggest win over Liverpool in 42 years, they had also — since it was Saturday’s early kickoff — gone top of the league, where they stayed for a few hours. 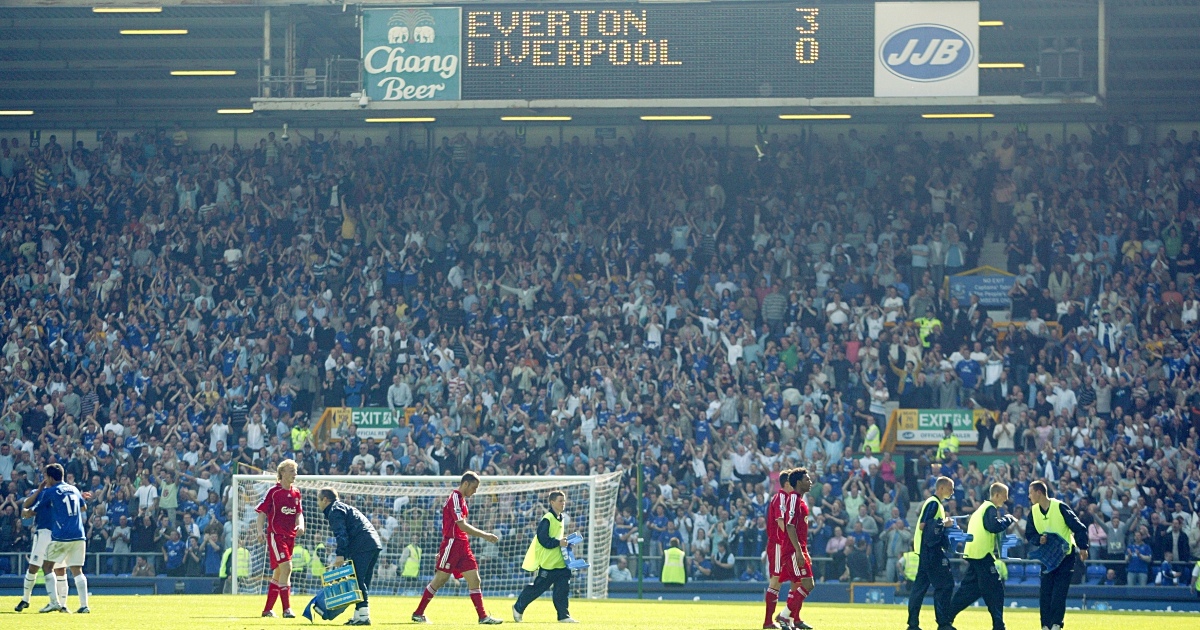 Of course, Everton couldn’t dine out on the victory forever.

One of the annoying things about supporting one of two bitter rivals is that even your victories can be used against you. Celebrating a victory like a cup final can be a good thing, but it can also be pointed and snickered at — the behaviour of a “small club”, as an irate Benitez would infamously brand Everton five months later.

Those words were disrespectful, but the Toffees were hardly shielding themselves from such criticism when, not long after the September fixture, the club committed the victory to film.

“We took a 3-0 beating at Goodison… and the DVD of the game was in the shops a week later,” Carragher scathingly wrote in his 2008 autobiography. 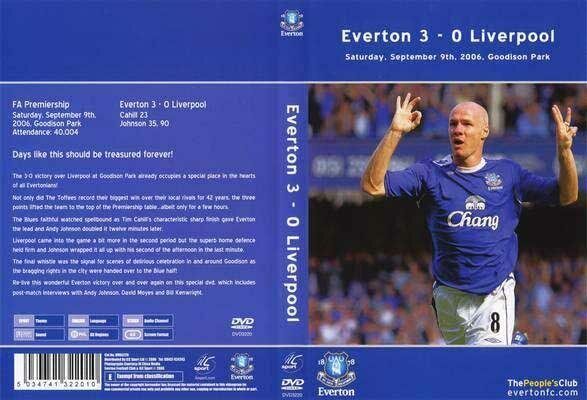 For Everton fans, it was a nice Christmas present. For those in red, however, it was proof of Everton’s lowly ambitions.

Indeed, the text on the rear cover boasts of Everton going “top of the Premiership table… albeit for only a few hours”. (Though by the time Andrew Johnson was signing copies of the DVD at a Liverpool HMV in early December 2006, Everton had fallen below their rivals in the table.)

Everton have since recorded one Premier League derby win in the Blu-Ray era (2010) and another in the streaming era (2021). Needless to say, they want — and deserve — a bit more than that.

Fans should continue to commemorate that famous day, but Benitez should equally try to win over those fans… by beating Liverpool by four goals.