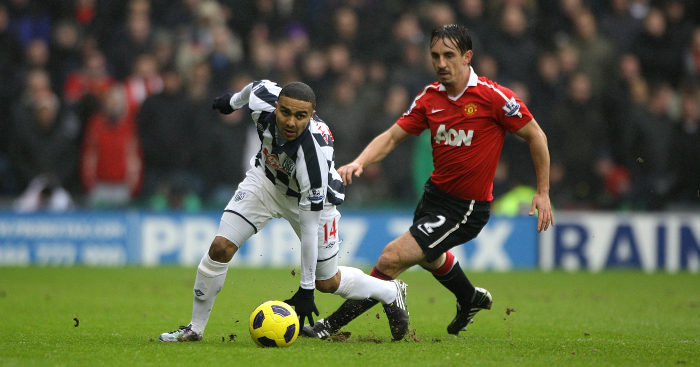 In his last season at Manchester United, Gary Neville looked about 100 years old. But he was something of a lucky charm.

“When you’ve got average players causing you a problem, you know you’re in trouble.” In 2017, that was Gary Neville’s honest verdict on his performances over the 2010–11 season, his last as a professional footballer.

He wasn’t exaggerating about the “average”. When a 35-year-old Neville took to the pitch that season, he wasn’t going toe to toe with famous adversaries like Marc Overmars and Arjen Robben; he was getting rinsed by the likes of Steven Pienaar, Matthew Etherington and Jerome Thomas.

In total, Neville made just three Premier League starts in his last campaign, looking a liability in each of them. He shipped three goals in one match and escaped blatant red cards in the other two.

Although Neville would later describe himself as a “passenger” in that United team, there was something admirable about the knackered veteran trying to keep up with those around him.

There was something else too. Despite no longer being able keep up with the tempo of the Premier League, Neville had a protective charm about him in his final days as a footballer. Impervious to defeats, invulnerable to red cards, the defender was – statistically, at least – invincible.

Ten years on from the full-back’s mid-season retirement on February 2, 2011, we take a look back at Neville’s final games for Manchester United and his own analysis of those performances.

Neville had originally planned to retire at the end of the 2009–10 season but was convinced to stick around by Sir Alex Ferguson — partly because of good performances at the back end of the campaign.

“For some reason I played 10 games on the run, I was playing really well,” Neville told Premier League TV. “And what was making me play really well was that I knew it was my last 10 games at Manchester United. I had this feeling in my mind of freedom, of just thinking I’m going to really enjoy this.”

He might have played slightly too well. In hindsight, he admitted that those games effectively “conned” United – and himself – into thinking there was another year in him.

Neville’s team-mate Edwin van der Sar had a more cautious outlook regarding the club’s veterans. “You can’t keep relying on the likes of myself, Scholes, Giggs and Neville,” said the goalkeeper ahead of the new campaign. “You have to bring through young players.”

For the first three matches of 2010–11, Ferguson favoured the relatively youthful John O’Shea (29 years old) at right-back, but Neville got his chance in the fourth: a trip to Goodison Park to face Everton.

The game was a disaster, with United blowing a two-goal lead in stoppage time. “We were 3-1 up and it finished 3-3 and the two goals came down my side,” Neville admitted.

Fergie swiftly returned O’Shea to the line-up, and Neville didn’t make the squad for the next four games.

The capitulation at Everton was infuriating for United and Neville, but the full-back wasn’t really singled out for criticism. The Manchester Evening News game him a 6/10 and called him “solid”.

That wasn’t the case six weeks later, when Neville got his second start of the season, making his 600th United appearance away at Stoke.

At this point, the painfully slow Neville began living a charmed life. The defender left a high boot on Matthew Etherington in the 35th minute and was booked. Seven minutes later, he made an even worse challenge, lunging in on the winger but somehow escaping punishment.

United went on to scrape a 2-1 win courtesy of two goals from new arrival Javier Hernandez, including one with the back of his head.

“Let me ask you this,” Stoke boss Tony Pulis fumed after the game, “if it was a Stoke City player at Old Trafford and he committed those two fouls, would he have been sent off? I am off to have a glass of wine with Sir Alex now and I doubt very much that he will disagree with me.”

While Neville escaped an early bath, he ultimately a bigger price for his errors: his dignity.

In a confusing sequence of events, Neville returned to the field alongside his team-mates for the second half. Only once he had taken up his position did he see his number being held up by the fourth official, prompting him to leave the pitch with a sheepish expression on his face.

Had Ferguson been too embarrassed to tell Neville in the dressing room?

“Honestly, I’d gone by then,” Neville later recalled. “I’d retired there. Even though I played on for another two months and another couple of games, in my mind I’d gone.”

Neville made a brief League Cup cameo two days after the Stoke fiasco but then watched from the stands for more than two months. He got an unexpected call-up on New Year’s Day 2011, with top-of-the-table United travelling to West Brom.

“After 20 minutes I knew that was my last game for United,” Neville later said. “The fans were singing my name.”

Using up the very last of his luck, Neville escaped another blatant red card, hacking down Graham Dorrans in the box in the first half.

Baggies manager Roberto Di Matteo was as perplexed as anyone: “I’m not saying we would have won the game with a first-half penalty and United down to 10 men, but it would have been nice to find out.”

Neville, for his part, wasn’t even enjoying his good fortune. “At half-time I sat in the toilet for 10 minutes on my own thinking, ‘I want this to end.’ I’d never felt that playing for United, but I knew I had to go. I had to finish.

United scraped another 2-1 win, but the next day Neville told Ferguson he was quitting. The Scot tried to dissuade him, telling him to go on holiday to clear his head, but ultimately accepted Neville’s decision. He did, however, encourage the veteran to keep coming into training to act as a mentor to the younger players.

In the end, even that modest task proved too painful. “I was embarrassed every day going in,” Neville said. “Thinking that this highly elite football club was having a guy in there as a passenger.”

United and Neville eventually announced the captain’s retirement on February 2, a month and a day after the West Brom match.

“I have been a Manchester United fan all my life and fulfilled every dream I’ve ever had,” Neville said. “I have played in the most incredible football teams, playing with some of the best players in the world, as well as against them, and I have been lucky to be a part of the team’s achievements and the club’s great success.”

And while nobody could have argued that Neville, almost 36, could have kept on playing important matches for United, Fergie was quickly vindicated for wanting to keep his club captain around the training ground.

Until the day of Neville’s retirement, United had been unbeaten in the league. Three days after the announcement, however, in the very first game of the post-Neville era, United lost 2-1 away to Wolves.

With just three appearances to his name, Neville didn’t receive a medal for United’s 2010–11 Premier League title. And given his brutal honesty about his performances, he surely wouldn’t have wanted one.

He can, however, claim to have gone the season – his part of it – unbeaten. Perhaps, even at 35, he added more to the team than he realised.