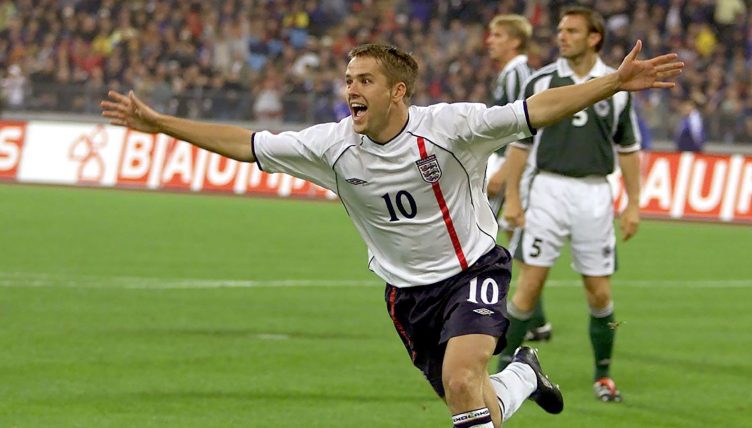 Twenty-one years on, England’s momentous 5-1 victory over Germany in 2001 is remembered vividly by all who witnessed it and revered as arguably the Three Lions’ greatest-ever performance.

But the context surrounding that World Cup qualifier, the sheer size of the task England faced that night, is perhaps no longer fully appreciated.

Germany were the unbeaten leaders of the qualification group for the 2002 World Cup in which they had been matched with England.

Eleven months earlier, they had beaten England 1-0 in the final game at the old Wembley Stadium, forcing the humiliated resignation of manager Kevin Keegan. They had lost just one of their last sixty qualifiers and were unbeaten in Munich since 1973.

Going into the game at Bayern’s Olympiastadion, then, England – led by their first foreign manager, the Swede Sven-Goran Eriksson, in just his fourth competitive fixture in charge – had no designs on a blowout victory. In fact, they’d have happily taken a draw.

“It was gradually building up and everyone was expecting we were playing for second place, because Germany were six points in front of us,” Gary Lewin, the England team’s physio between 1996 and 2017, says.

“The expectation was that, worst-case scenario, we nick a draw and go on to need a draw in the last game. So the build-up was quite relaxed. We were under no pressure because the expectation wasn’t there.

“Sven had this great way of relaxing people. He was a very relaxed manager. He liked the squad to be relaxed. It was a fantastic atmosphere and nobody could dream we would go on and do what we did, but we went into the game quite confident.” 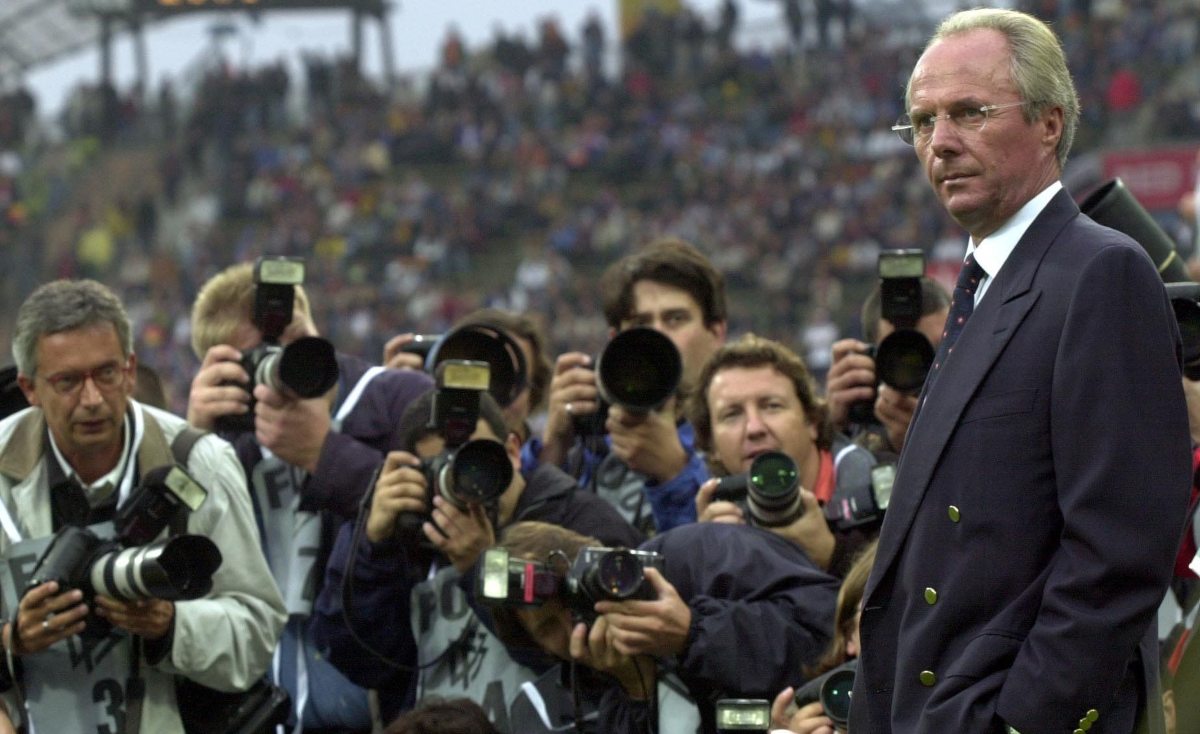 Eriksson’s demeanour and pre-match approach was one familiar to Lewin, who, in addition to his duties for the national team, served as Arsenal’s physio for more than two decades.

“Arsene was very much, ‘You train the way you play.’ Sven was a little more laid back in training. This was probably a bit more of the Italian coming out in him [having previously managed in Serie A, with Sampdoria and Lazio].

“He had an Italian who’d do all the fitness work, and he almost used to separate the fitness work from the football work, so that was slightly different. But the actual preparation, the focus, how we actually prepared for games was very similar.”

For all the calm resolve preached by the manager, the game’s opening stages were frantic, with towering striker Carsten Janker scoring for Germany after just six minutes, before Michael Owen equalised six minutes later.

“We went 1-0 down really early and then we equalised quite quickly afterwards,” Lewin recalls. “David Seaman made an unbelievable save at 1-1 – the guy really should have scored. And then we scored just before half-time.” 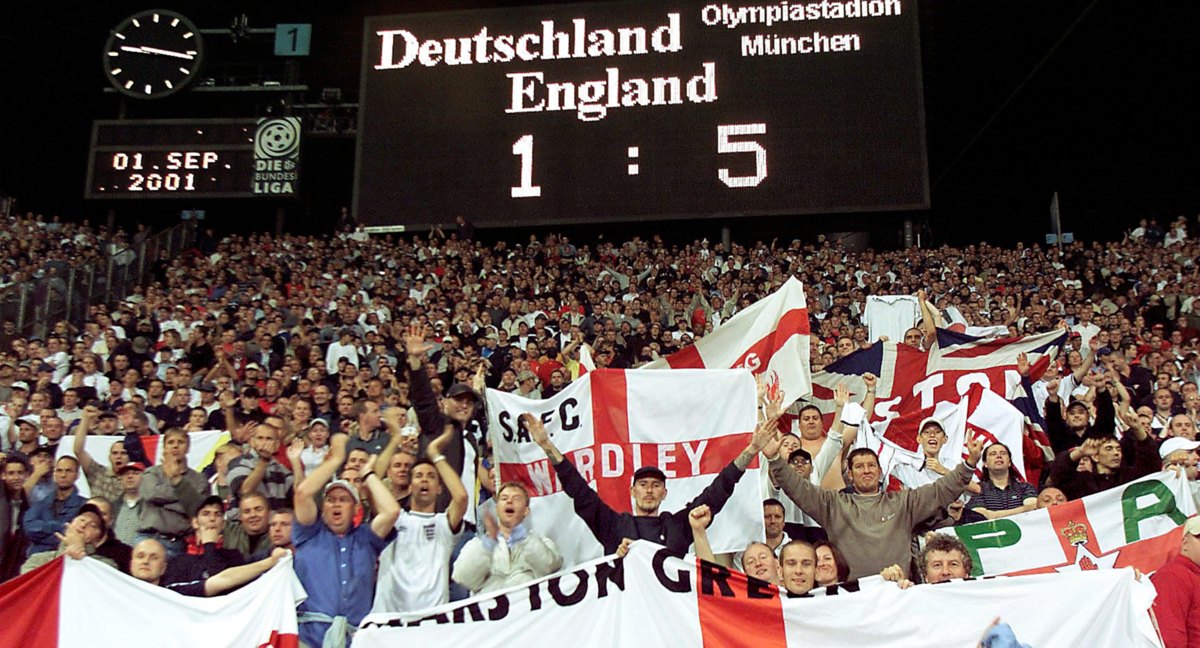 Steven Gerrard’s thunderous long-range strike, his first goal in senior international football, came in stoppage time at the end of the first half, boosting England’s belief that all three points, rather than the targeted one, were within their grasp.

But, while the players continued to heed Eriksson’s pre-match edict of calm caution, the manager instructed that their defensive focus be allied with a degree of adventure when the opportunity called.

“We started the second half and we scored quite early, after three of four minutes. Then it goes 3-1. They made a couple of substitutions and you knew they were going to go for it, but we picked them off.

Owen bagged a hat-trick that played no small part in his being awarded the Ballon d’Or at the end of the year. And his Liverpool striker partner, Emile Heskey, who only scored seven goals in an 11-year, 62-cap international career, calmly slotted the fifth past legendary German goalkeeper Oliver Kahn – “5-1 and even Heskey scored,” England fans would sing for years to come.

“The biggest memory of the night was 6,000 fans doing Dam Busters behind the goal,” Lewin, who now is now the director of the Lewin Sports Injury Clinic in Hainault, remembers of the post-match celebrations.

England, of course, did go through as group winners, albeit not without drama. Expected to beat Greece with relative ease at Old Trafford the following month, they ended up needing a last-minute David Beckham free-kick – capping a herculean, all-action display from the captain – to salvage a 2-2 draw. Fortunately, Germany fared no better in their final group fixture, drawing 0-0 at home to Finland.

While the 5-1 victory in Munich ought to have heralded the beginning of a glorious period for England and the much-vaunted ‘Golden Generation’ of Beckham, Owen, Gerrard and later Frank Lampard and Wayne Rooney, it is ultimately remembered as the zenith of that crop, who were never able to progress beyond the quarter-final stage of a major tournament.

But Lewin, who was on the sidelines and in the changing room throughout that period, disagrees with harsh assessments of what Eriksson and those England players achieved.

“They call it the golden era,” he says. “We had so many good players in the team. I think the problem was we probably had too many good players and we couldn’t fit them all in. Sven was a little bit criticised for that. People feel he didn’t get the best out of the squad we had.

“But I would argue that three quarter-finals in a row, losing two on penalties, that’s debatable.

“It was a special group and it was a very, very special night.”

READ NEXT: A tribute to David Beckham, England’s man for the big occasions