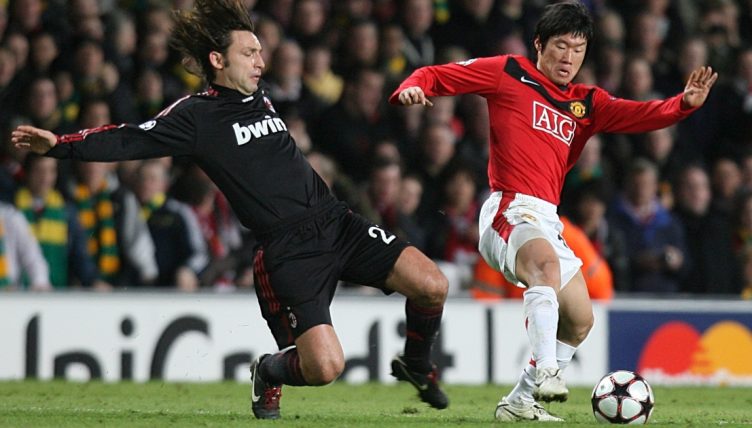 The phrase ‘rent free’ is one of the more head-bangingly inane of modern football’s lexicon.

Yet how else can you describe Andrea Pirlo’s description of Park Ji-sung in his refreshingly blunt autobiography Penso Quindi Gioco (I Think Therefore I Play)?

“[Sir Alex] is a man without blemish, but he ruined that purity just for a moment when it came to me,” Pirlo wrote. “A fleeting shabbiness came over the legend that night. At Milan, he unleashed Park Ji-sung to shadow me.

“[Park] rushed about at the speed of an electron. He’d fling himself at me, his hands all over my back, trying to intimidate me.

“He’d look at the ball and not know what it was for. They’d programmed him to stop me. His devotion to the task was almost touching. Even though he was a famous player, he consented to being used as a guard dog.”

The night in question was actually the two legs of a Champions League last-16 tie between Manchester United and AC Milan in 2010.

Pirlo still remembered the occasion years later like a man whose diet consists solely of sour grapes and pints of bitter.

It’s no secret that Sir Alex Ferguson was the greatest manager of his generation. Whether he was more of a chalker or a talker is up for debate, but his instructions to Park before walking out at the San Siro combined both sides of his management.

“Your job today is not about touching the ball, it’s not about making passes, your job is Pirlo. That’s all. Pirlo,” Ferguson told Park, as Wayne Rooney recalled in a recent column for The Sunday Times.

Park possessed the required diligence, discipline and man-marking skills to contain the Italy midfielder. Signed for £4million from PSV Eindhoven in 2005, the South Korea captain had carved out a niche as a key cog in Ferguson’s winning machine.

Paul Scholes, a man so English he smelt of milky tea yet was the closest domestic equivalent to Pirlo, was effusive about Park’s qualities having experienced the Italian’s pain in Manchester United training.

“Do you know who the worst one was? Park Ji-sung. He was a nightmare! He was unbelievable,” Scholes told MUTV.

"I'm sure Pirlo expected to wake up and see Park Ji-sung in his bed!" – @rioferdy5

Sir Alex knew he had to do something to slow down AC Milan's conductor, and he knew the man for the job…

Pirlo faced similar treatment. From the start of the knockout tie, the Italian playmaker wasn’t given a second to look up and play a forward pass.

Milan were a team full of the previous decade’s superstars – Dida, Alessandro Nesta, David Beckham and Ronaldinho lined up alongside Pirlo.

Even so, the feel of the tie was dictated by Park. His contribution may have been overlooked by contemporary match reports; the Guardian’s failed to mention his name once and neither did the BBC.

But the player nicknamed ‘Three Lungs Park’ gave the performance of his Manchester United career to keep Pirlo in check.

Everywhere the Milan talisman went, Park followed. Every stray pass in Pirlo’s direction was intercepted with the energy of a border collie bounding after a tennis ball. He refused to allow the conductor to dictate the tempo of the match.

United won 3-2. While his 90 minutes in northern Italy contained no goals or assists, his team-mates were in no doubt who the real matchwinner that night was.

Years later, Rio Ferdinand waxed lyrical about the midfielder’s display. The image of a sleepy Pirlo waking up to find Park perched next to him is certainly one that’ll stick with us long after our memories begin to fail.

The night Park Ji-Sung planted himself firmly in the head of Andrea Pirlo.

The United man repeated the display a month later during an emphatic 4-0 win best remembered for Beckham draping himself in a green and yellow scarf, a symbol of fan protests against the Glazer family.

If Pirlo was subdued before, his influence was non-existent at Old Trafford. He made just 21 passes and started kicking out in frustration before the game’s end. Some supporters even claimed they saw Pirlo break out into a trot, although those reports remained unconfirmed.

While the World Cup winner has become idolised by a generation of fans, his attitude towards Park was the dictionary definition of disparaging.

Ferguson was renowned for balancing out world-class talents with hard-working solid professionals. But Park was far more than that. He was a talented midfielder in his own right, beloved by his team-mates, and he enjoyed a successful seven-year stay at Old Trafford.

San Siro will remain Park Ji-Sung’s crowning glory. He may have been denied his moment in Moscow when United won the trophy two years prior, but he at least owns a long-term lease in the subconscious of Andrea Pirlo.