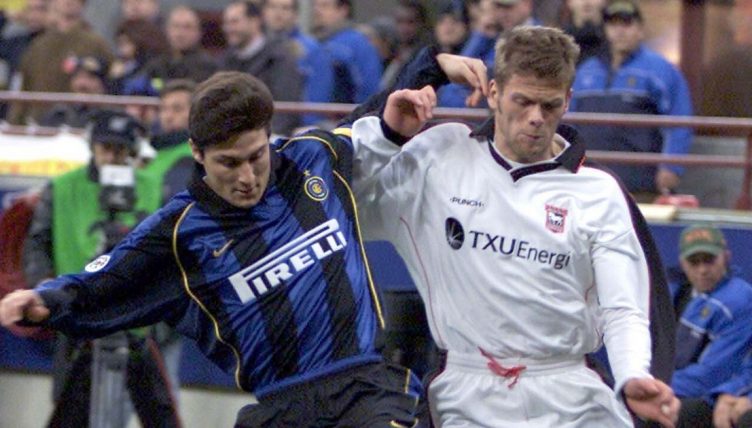 It’s been 20 years outside the Premier League for Ipswich Town, but their last top-flight season was memorable for other reasons.

If you ask a football fan whether they’d accept relegation if it meant your team got a European run, the answer would probably vary greatly depending on the club in question.

Had Ipswich fans known their Uefa Cup run would be followed by a long spell outside the Premier League, they might have second thoughts, but the memories provided by that spell in Europe will last a lifetime.

The 2000-01 season was a real triumph for the Tractor Boys, who had only just come up to the top flight under George Burley.

Marcus Stewart was a revelation up front, academy product Richard Wright established himself as a Premier League goalkeeper, and Burley was named manager of the year after taking the team within three points of a Champions League spot.

Indeed, Ipswich’s 66 points would have been enough for Champions League football in other seasons. However, they ended up being victims of their own success.

🎄 | It's day 🔟 of the #itfcAdventCalendar and we've picked out a cracker…

Marcus Stewart grabbed his 🔟th goal of the 2000/01 season on the 🔟th of December at Anfield as Town defeated Liverpool 1-0 ⚽️ #itfc pic.twitter.com/mDfje4DnwF

Wright was arguably the biggest loss, with the England international joining Arsenal, and replacement Matteo Sereni was unable to prove as reliable as some hoped.

The carrot of European football did allow Burley to recruit the kind of player he might not otherwise have been able to bring on board, but this wasn’t always a good thing: Sereni was joined by Finidi George, a Champions League winner with Ajax in 1995 but no longer the player he once was, while exciting Argentine Sixto Peralta joined on loan from Inter Milan at a time when the club perhaps needed experience as much as excitement.

Ipswich were doing some of the right things, expanding their squad with the expanded fixture list in mind, but a struggle to integrate new signings, combined with second season syndrome at home, made for a tough start from which they were unable to recover.

Indeed, when they were eliminated from Europe in December, they had more wins on the continent than at home, where the first 15 games of the campaign brought just one win, and Burley would later tell Planet Football his team perhaps overdid things on the new recruits front.

“That was probably the mistake I made: building the squad up over the previous five or six years, and then dismantling it a little bit,” he admitted. 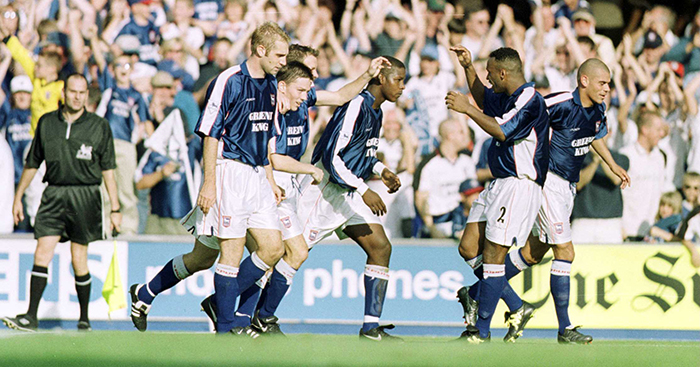 Torpedo Moscow were Ipswich’s victims in the first round of the Uefa Cup, with a win in Russia representing the kind of famous away result many fans will have been hoping for.

While older fans may have been around for the 1981 Uefa Cup triumph under Bobby Robson, many of those who travelled across the continent in the early 2000s were too young to appreciate that victory – or indeed the 1982-83 exit which represented the last European involvement before Burley’s team made history.

The second round brought another big away win, this time in Sweden as Helsingborg were put to the sword.

Mark Venus laid on the first two goals, scored by Hermann Hreidarsson and Marcus Stewart, before Stewart – who hadn’t been entirely prolific at home – clinched victory with a delightful chip over goalkeeper Sven Andersson.

The goal had shades of Davor Suker’s famous goal against Denmark at Euro 96, and set up a third-round match-up of dreams against Inter Milan.

By the time the first leg against Inter rolled around, Ipswich were coming off three straight league defeats which left them in the bottom three.

The names on the teamsheet for the Italian side read like a who’s who. While some first-teamers were rested, they could still call upon Italy goalkeeper Francesco Toldo, South American stars Javier Zanetti and Ivan Cordoba in defence, Champions League winner Clarence Seedorf in the middle of the park and Sergio Conceicao and Marco Materazzi among the substitutes.

This Ipswich team shouldn’t have been able to shut out that Inter team, but they did just that, going ahead through Alun Armstrong and keeping that lead for the entire 90 minutes.

“We’ve beaten a tremendous side and I just hope we can carry that form on into the league,” Burley said, optimistically, after the game. Sadly for his side, the winless run continued and another Armstrong effort wasn’t enough to prevent Inter getting the result they needed in the second leg at the San Siro.

“We thought we were in with a chance after winning the first leg but then they stepped it up and gave us a bit of a football lesson,” Armstrong said of the second leg, where Christian Vieri came back into the fold and scored a decisive hat-trick.

“But it was an amazing experience and to get a goal against Toldo again, in the San Siro was something I will remember for the rest of my life,” he added, remembering the “nearly 10,000” Ipswich fans behind the Inter goal. And there’s no doubt those fans will remember the experience just as fondly.

A mid-season recovery did eventually arrive, with the less congested fixture list allowing Burley’s men to pick up some results and keep themselves in touching distance of safety.

However, one of the final nails in the coffin came in the spring, when Bolton’s Fredi Bobic decided a six-pointer with his only hat-trick in English football.

Even if the last two decades have been challenging, it’s not every day you get to travel to Milan as an away fan. Unless you support one of a handful of top clubs, it’s probably a once-in-a-lifetime experience.

There’s a short coda to this story: despite dropping down to the second tier, Ipswich surprisingly earned another crack at Europe through the fair play rankings.

By the time they were eliminated this time around, though – against Slovan Liberec in the second round – Burley’s time was up after an underwhelming start to what was meant to be a promotion push.

“It wasn’t easy, but the European experience was fantastic and even being in Ipswich now people will come up to me say ‘remember those European games we went to?’ and it’s kind of like it was the good old days,” Burley would later recall.

A lot of the time, supporting a football club is about the extreme highs and lows more than any consistently ‘okay’ period. There’s no way you’ll remember an 11th place finish as much as you will a 5th followed by an 18th with European outings to boot.

Was it worth the trade-off to generate those memories? It depends who you ask.