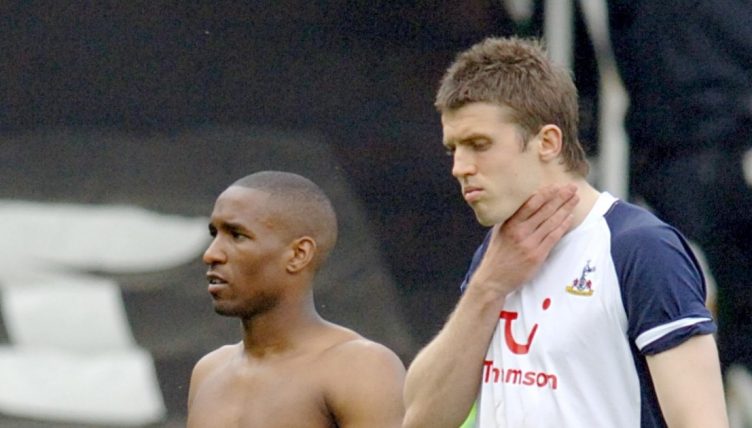 There is nothing quite like the feeling of schadenfreude in football, though it can often come from unexpected sources – just ask Arsenal and Tottenham fans.

Tottenham finished above their Arsenal rivals for the first time in 22 years in 2017, and the fact they have repeated the feat four more times since suggests the balance of power may have shifted in north London.

Spurs’ period as second best was so nearly halved, though – only to be scuppered by the most famous lasagne in Premier League history.

Only two years after Arsenal’s Invincible season, on the final day of the 2005-06 season, Spurs were 90 minutes away from pipping the Gunners to fourth place.

It would have been some achievement: while Arsene Wenger still had the likes of Thierry Henry, Dennis Bergkamp and Robert Pires at his disposal this was hardly a vintage Tottenham side.

Robbie Keane and Jermain Defoe were reliable strikers, while Michael Carrick’s form earned the midfielder a move to Manchester United, but the squad still consisted of players of the calibre of Grzegorz Rasiak and Teemu Tainio. 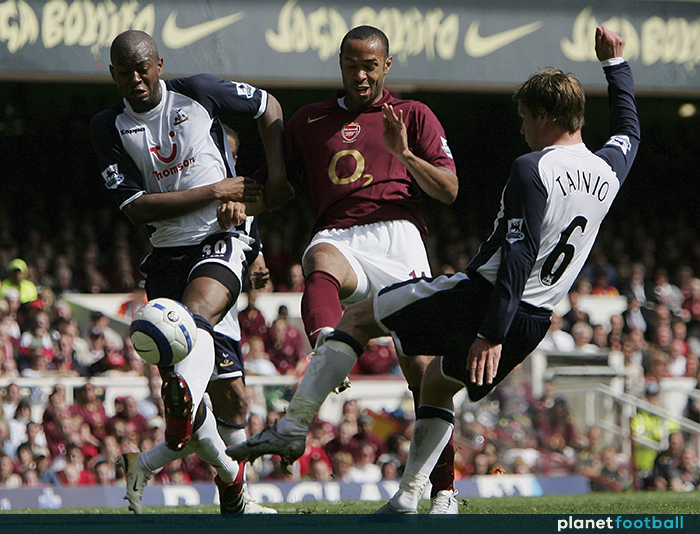 Yet despite a group of players with obvious shortcomings, Martin Jol’s side occupied fourth spot from December and, after winning their penultimate match of the season, were seven points clear of Arsenal.

The Gunners, with their fixture list disrupted by a European campaign which saw them reach the Champions League final, cut the gap to just a single point by winning their two games in hand.

That ensured Tottenham headed to West Ham on the final day of the season needing to match Arsenal’s result against Wigan – in the final match at Highbury – to secure fourth place.

If the Gunners were consigned to fifth, however, they could still snatch Champions League qualification by beating Barcelona in the final of the competition a week later.

As if all that wasn’t quite tense enough, events on the eve of the two clubs’ matches ensured the final day of the 2005-06 season went down in Premier League folklore.

“The silly thing is that for a game against West Ham we would have normally just stayed at home because it was a local derby, but because it was such a crucial game the club put us in a hotel because they wanted us to be together,” Jermaine Jenas, who was already due to miss Spurs’ clash at Upton Park, wrote for Yahoo in 2016.

At the insistence of the club, Tottenham’s players stayed at the Marriott West India Quay, where at around 7pm they gathered to tuck into a buffet laid on by the hotel. Lasagne was the choice of dish preferred by the majority of players. Lovely, innocent lasagne.

Unknowingly, the chefs at the Marriott that night had in fact cooked up a rather underwhelming version of Tinker Tailor Soldier Spy.

At around 1am, Tottenham’s players began to fall ill. Reports suggested 10 players were struggling with symptoms of food poisoning.

Jol insisted it was many more: “I can sum up the players who were not sick. There was Paul Robinson, Stephen Kelly, Anthony Gardner and Jermain Defoe and the rest were sick.”

Daniel Levy quickly tried to have the fixture postponed until at least the following day, only to be told it was not possible. Premier League supremo Richard Scudamore informed Levy that it was down to the club to decide whether they could fulfill their fixture, but they would then face an investigation and could be fined or even docked points.

In 1996-97, Middlesbrough had been docked three points and fined following their decision not to send a team to Blackburn after their squad was hit by a bug. Spurs couldn’t risk a points deduction, and it became apparent the game was going to take place.

Jol then asked that the game be put back until 7pm, allowing his worst-affect players – it was commented that Carrick could barely walk – the chance to sleep for a couple of hours before the fixture.

The police, concerned by the amount of supporters who were already filling pubs around Upton Park, said 5pm was the latest possible kick-off time. After Tottenham decided two hours would not be a significant amount of time to allow their players to rest, it was confirmed the fixture would go ahead at 3pm as initially planned.

Arsenal’s players were conveniently staying at the neighbouring Four Seasons hotel. Jermain Defoe, meanwhile, pointed the finger at his former club, telling FourFourTwo in 2017: “I thought, ‘Something has definitely gone on here – one of the West Ham lads has done something to the food.’”

The police got involved, taking food samples to environmental health officers to test, while hotel manager Paul Downing confirmed they had started their own investigation.

When Tottenham began to prepare for the match, the size of the task facing them became clear. At one stage it was even feared they would not be able to name a starting XI. “We will have to field 10, have you got your boots?” one director asked the Daily Telegraph’s Mihir Bose. 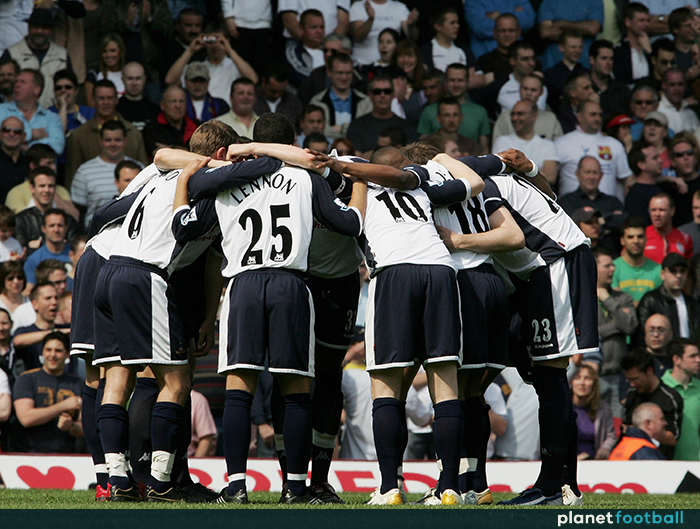 “While the gaffer Martin Jol was giving his team talk before the game, players were being sick in the toilets,” Jenas wrote. “Once the game started players were literally running off the pitch. It was carnage.”

Things went from bad to worse for Spurs when Arsenal took the lead against Wigan thanks to a Robert Pires goal on eight minutes.

Two minutes later, their agony was compounded by Carl Fletcher putting West Ham ahead with a long-range strike which skidded past Paul Robinson in goal.

Despite Tottenham’s players visibly struggling on the field, they were briefly given hope as Wigan mounted a surprise comeback through Paul Scharner and David Thompson, while Jermain Defoe – public enemy No.1 at Upton Park – bagged a sharp equaliser.

As Defoe struck in East London, Thierry Henry levelled at Highbury, but Spurs were still set for fourth place.

With Arsenal fans worried about the prospect of an unfitting farewell for their 93-year-old stadium, Henry proved the saviour at the ground for one final time, completing his hat-trick in the second half as the Gunners put all the pressure on Tottenham with a 4-2 victory.

Against all the odds, Spurs were still fighting and in with the chance of victory. Robinson saved a Teddy Sheringham penalty and chances fell to Keane and Tainio.

Carrick was forced to depart after an hour, but Danny Murphy, who was supposedly unaffected by illness, bizarrely remained on the bench for the duration.

“The pride of the players was so great that they inadvertently vindicated the administrators’ decision that the fixture must go ahead,” wrote Kevin McArra in The Guardian. “The visitors finished the afternoon more vigorously than they had begun it, as adrenaline and, ultimately, desperation took hold of them.”

But with 10 minutes remaining, West Ham delivered the killer blow. Yossi Benayoun collected a Nigel Reo-Coker backheel inside the penalty area and, with the grace and poise which made him such a favourite at virtually every club in London (bar his opponents on the day), left Michael Dawson in a heap on the floor before firing into the top corner.

Celebrations for St Totteringham’s Day began at Highbury, while a number of Spurs players could be found in tears back in the Upton Park changing rooms.

Speaking after the results were confirmed, Arsene Wenger expressed a degree of sympathy for Arsenal’s fierce rivals: “What happened to Tottenham I don’t know. I feel sorry for that. We knew what happened at West Ham was out of our hands. It is cruel for Tottenham, but sport is like that.”

Alan Pardew, meanwhile, who had the FA Cup final to look forward to the following week, maintained the illness did not have a significant bearing on the match: “If Tottenham hadn’t been under the weather they would still have been in difficulty.”

The drama did not stop there, however. Later that month, the results of the investigation into the food at the Marriott Hotel were announced: “Completely negative.”

Colin Perrins, head of Tower Hamlets Trading Standards and Environmental Health, said: “A thorough investigation into this incident was carried out by the Health Protection Agency in close partnership with the borough’s Environmental Health Officers.

“None of the results or findings indicated that food poisoning was the cause. The likely cause of illness suffered by the Tottenham Hotspur FC staff and players was from a viral source.”

What started with conspiracy and accusations of espionage ended with the underwhelming truth that the Spurs players had caught a bug at the worst possible time of the season.

Still, trying letting that take away from any of the joy the Arsenal fans experienced that day – and try stopping that lasagne go down in Premier League history.