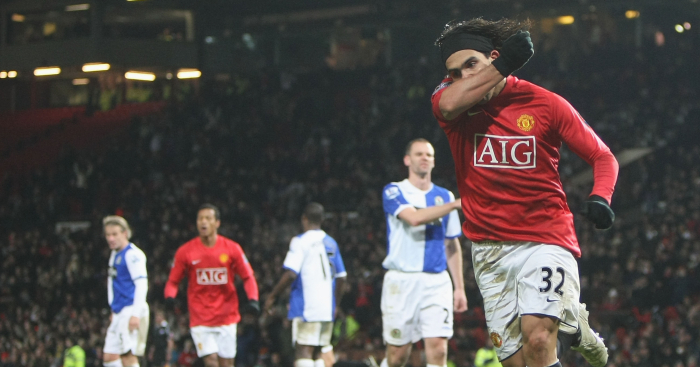 We’ve often been spoiled by the League Cup, with a host of memorable finals in the 2010s alone.

Manchester United’s 3-2 win over Claude Puel’s Southampton was a real cracker, while we saw Birmingham stun Arsenal, and Liverpool require penalties against Cardiff in back-to-back years at the start of the decade.

However, that’s not to say the earlier rounds haven’t produced their fair share of entertainment.

The 2008-09 edition of the tournament is a prime example, with Tottenham at the centre of two of the more ‘fun’ games.

Harry Redknapp’s Spurs scored three goals in six minutes en route to a 4-2 win over Liverpool, before needing extra-time to beat Championship Burnley in the semis despite a 3-0 first-leg win.

However, as is so often the case, Spurs were one-upped by Manchester United. United, along with Paul Ince’s Blackburn Rovers, produced a game so ridiculous we’ve collectively decided to wipe it from history.

It will be written out of the history books no longer, though, as we’ve gone back and taken a closer look at one of the most stupid cup games in recent memory, a game so haphazard it single-handedly reignited Sam Allardyce’s managerial career despite him not even being involved.

The League Cup provided Blackburn and Ince with a welcome respite from some dismal league form.

After beginning his campaign at Ewood Park with three wins from six games, things had turned sour going into December. Rovers were winless in nine league games when they travelled to Old Trafford, even contriving to lose to Tony Adams’ Portsmouth, but edged past Premier League rivals Everton and Sunderland in the cup.

They won’t exactly have been confident going into their quarter-final – can I refer you back to that loss at Portsmouth – but they might have considered themselves capable of causing an upset, especially when the line-ups were announced.

After a goalless first half-hour, though, things started to get weird.

Blackburn had some of the better early chances, with Foster saving well from a Stephen Warnock header, but the opener came when Foster’s opposite number failed to claim a cross.

Paul Robinson had already been bailed out once by a goalline clearance but got nowhere near Ryan Giggs’ deep delivery from the right, allowing Carlos Tevez to bundle the ball over the line.

It was Tevez’s first goal of the evening, but it wouldn’t be his last.

Almost before you could blink, and in a reversal of the Spice Girls Christmas number one, one became two.

Tevez turned provider this time, exchanging passes with Nani before the Portuguese winger drilled a low shot through Robinson to double the lead.

Ince’s men conceded two in five minutes the previous weekend in their defeat to Portsmouth, so they really ought to have known they were at their most vulnerable right after conceding, but knowing and being able to do anything about it are very different things.

After going in 2-0 down at the break, Ince decided to take the death or glory approach, bringing on striker Benni McCarthy for midfielder Brett Emerton.

And it took barely three minutes for the substitute to make an impact, bustling past Gary Neville as if he wasn’t there before letting fly with a right-footed shot which was beyond Foster before he even saw it.

The comeback was on. Well, that’s what Blackburn thought, at least.

After getting back into the game, it would have been pretty stupid to concede a needless penalty just a couple of minutes later.

Sorry, let me say that one more time for the André Ooijer at the back. It would have been PRETTY STUPID TO CONCEDE A NEEDLESS PENALTY J- oh, I’m too late.

There was probably a case for Ooijer getting sent off for his foul on Tevez, but United won’t have been complaining all that much after the Argentine put away the penalty to restore their two-goal advantage.

What was that we said earlier about not letting your guard down immediately after conceding a goal? Yeah, it happened again.

This was arguably the best goal of the lot, with Anderson dancing through the Blackburn defence, playing one-touch one-twos with Giggs and Tevez before rolling the ball across for his team-mate to tap into an empty net to complete his hat-trick.

This is what I think is known as ‘liquid football’

Like a chicken scrambling around for a few seconds after being decapitated, Blackburn weren’t quite done. However, if Tevez’s third goal was as slick as they come, this was the opposite.

A series of tackles (perhaps that’s what got Allardyce excited about replacing Ince later that month) ended with the ball breaking to McCarthy, who drove forward and slipped a delightful ball through to Derbyshire, who stroked the ball home.

Wait, did we say stroked the ball home? We meant almost tripped himself up before just about forcing the ball into the net more by luck than judgement.

It wasn’t over just yet. As the clock ticked past 90, Derbyshire got free down the right and swung a tantalising ball into the box.

While others might have slowed down and wound down the clock, McCarthy wasn’t done yet. He zipped in front of Neville and helped the ball into the far corner.

With a few minutes left to play, Blackburn knew there was just enough time for another goal. After all, having put three past Manchester United, surely they were capable of scoring another.

Blackburn were right about there being an eighth goal, they just got the end wrong.

Tevez wasn’t really going to let them have the last word, though – he has never been the sort of person to score a hat-trick and run any risk of not ending the game on the winning side, and that was evident in the way he lashed the ball past Robinson in stoppage time to make sure of victory.

We shouldn’t ignore the delightful ball through from Anderson, either – with this and the assist for goal number four, the Brazilian had one of the best games of his early United career, and won’t want it to be forgotten.

Manchester United would go on to win the trophy, beating Tottenham on penalties in the final after a goalless draw at Wembley.

That was pretty much all she wrote for Ince at Blackburn, though: after two more league defeats, against Liverpool and Wigan, the former England midfielder was relieved of his duties.

If he’d managed to mastermind a comeback at Old Trafford, perhaps he’d have gone on to turn things around in a wider sense. Or maybe he’d have just clung on long enough to give his successor an impossible task.