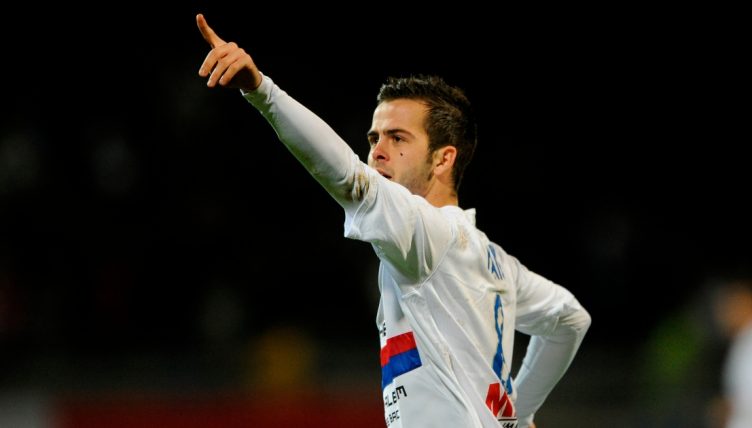 Miralem Pjanic’s career in Italy has been eventful enough to make us forget about the young upstart who stunned Real Madrid at the Bernabeu. But the Bosnian’s Lyon spell shouldn’t be forgotten, and it shouldn’t be remembered for that moment alone.

Back in 2009-10, Madrid were right at the start of the latest Florentino Perez era, and to call their squad ‘expensively assembled’ would be an insult to money.

Kaka, Cristiano Ronaldo and Xabi Alonso had joined for a combined total of around €200million, while Los Blancos had targeted Lyon specifically with a €35million swoop for their attacking prodigy Karim Benzema.

No one was meant to be able to stop Manuel Pellegrini’s team in the Champions League, but Lyon especially weren’t meant to stand a chance.

However, after Ronaldo had scored at the Bernabeu to cancel out Jean Makoun’s first-leg winner, and with just 15 minutes left on the clock, Pjanic – still six weeks shy of his 20th birthday – silenced the home crowd with a lovely, lovely goal.

As Lyon coach brilliantly said afterwards, “it was a nice night out.”

Since moving on from Lyon, Pjanic has forged a reputation as one of the world’s most subtly brilliant free-kick takers.

First impressions can do a lot for how you look at a footballer, and there’s nothing more dangerous than deciding a slight, unimposing midfielder won’t cause you that much trouble.

Even now, after years of witnessing Pjanic’s ridiculous ability from dead-ball situations, he can somehow still trick you into thinking he’s not going to do what you expect. That even applies to goals you’ve seen before – even when you know the outcome, he has a way of planting that seed of doubt.

Really, though, should we be surprised to see this from a man who followed in the footsteps of the great Juninho Pernambucano? The pair spent just a year together before Pjanic inherited Juninho’s No.8 shirt…and a great deal more.

It was in the 2010-11 Champions League when many of us saw Pjanic the free-kick maestro at work for the first time.

It certainly felt like a new experience for Vukasin Poleksic, the Debrecen goalkeeper faced with the task of picking a Pkanic set-piece out of his net during a group stage defeat. Note that I don’t say the task of saving the shot, because that was never really a consideration.

The ball goes where it’s meant to from Pjanic’s perspective, but the Montenegrin keeper can do little more than watch him walk up to the ball and watch it land in the bottom corner of the net, with the events in between little more than a blur.

Of course, in the years since, we’ve seen him really hone his craft, with one goal in particular absolutely reeking of Juninho.

When a player moves to Roma, doing the business against Lazio is a surefire way to get in the fans’ good books. To do to with a stunner of a free-kick takes it up a notch or 10.

Roma might have lost 3-2 to their rivals in November 2012, but if there was ever a goal likely to boost morale it was the one scored by their No.8.

Federico Marchetti was no mug, having kept goal for Italy’s national team at the World Cup just two years earlier, but even he was made to look particularly foolish.

In his defence, it’s the sort of position, 45 yards out to the right of the centre circle, where you tell yourself: ‘There’s no way he’s possibly shooting from here.’

It doesn’t matter if you’re watching a clip entitled ‘Miralem Pjanic goal v Lazio’. It doesn’t even matter if you’ve seen the goal before, or if you were even at the Stadio Olimpico for the game itself. Each time you watch him step up to the ball, you convince yourself it’s impossible. And then you remember.

As Pjanic’s stock threatens to fall at Juventus after a decent few years, we still see a fair few glimmers of the talent we witnessed from him a decade ago.

There’s always a temptation to sugar-coat a player’s younger years for the simple reason that it’s natural for us to crave excitement and to cling to those things which felt genuinely fresh and new when we saw them for the first time.

We can still enjoy Miralem Pjanic’s football however we want, but many of us will never forget those years in France which helped make the player we know today.