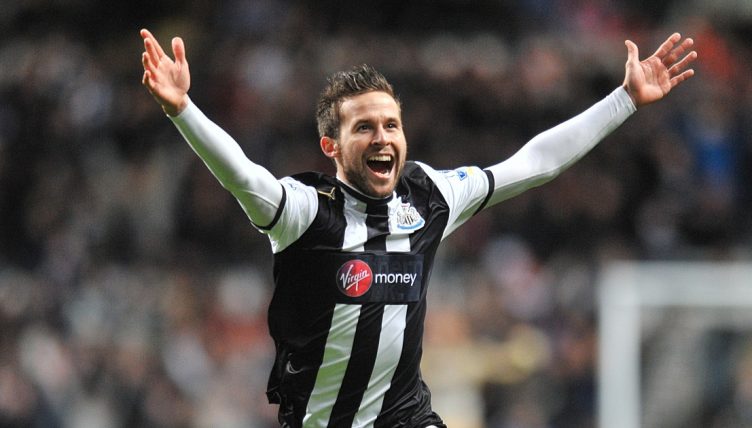 January 2013, Villa Park. While Newcastle United were in the process of beating Aston Villa 2-1, an unfamiliar chant was heard among the away support: “Bonjour, bonjour, we are the Geordie boys.”

Newcastle supporters are never the most inconspicuous bunch and those who’d massed in Birmingham were wearing something other than the normal Stone Island.

Berets, Les Bleus shirts – even full Gallic costumes of sailor striped tops and onion strings were all seen among the Toon Army.

Also present were tricolour flags, emblazoned with the words ‘Le Toon’. Back in Newcastle, a new sign was hung at The Strawberry, the famous pub at the Gallowgate End, christening it “La Fraise”.

The reason? Two hundred and twenty-four years after Marie Antoinette told her people to eat cake, Newcastle were experiencing a French Revolution of their own.

Reality is more complicated. Like a man receiving praise for his new Topman tee and proceeding to buy another dozen of them, Newcastle shopped almost exclusively in Ligue 1 for four years.

The peak was early-2013 when five French players arrived to stave off relegation under Alan Pardew. At its zenith, Newcastle could’ve theoretically fielded an entire team of Frenchmen.

And its hit rate was mixed. For every Cabaye, there was a Mapou Yanga-Mbiwa. For every Ben Arfa, there seemed to be two or three attacking failures.

Ultimately, the successes of Newcastle’s French liste de courses were happy accidents of Mike Ashley’s belt-tightening policy. Once the rest of the league cottoned on, relegation in 2016 was somewhat inevitable.

The brief from Ashley in 2010 was clear; identify young, low-budget talent with high sell-on potential. With this in mind, head scout Graeme Carr was adamant that Ligue 1 would provide a good basis for his search.

In a 2013 interview, Carr explained: “It’s easy to get to northern France because only 60 miles from Calais are three teams, Lille, Lens and Valenciennes, and you find that you can take in two or three matches with one visit.”

But it was in southern France that Carr and Newcastle picked up their first bargain in Marseille’s enigmatic Ben Arfa.

Carr said: “Like Cabaye, Ben Arfa is a full French international and he is obviously a good ­player. We got a tip-off and we moved in ­quickly to get him first on loan.

“I’ve been ­watching Cabaye since he was 18. I liked him so much I asked Chris Hughton to come along with me when he was boss to watch him. But the asking price by Lille was then £10m, which was out of our reach.

“We heard he had a get-out clause and again that was all we needed.”

Signed from then-French champions Lille in the summer of 2011, Cabaye became an instant fan favourite on Tyneside for his technical ability and his trademark set pieces.

The France international dictated play from midfield, Ba and Papiss Cisse scored goals for fun and Ben Arfa chipped in with moments of impudent joy that delighted a buoyant St James’ Park.

Take a look at the Magpies' most memorable @premierleague victories against the Red Devils here: https://t.co/YGsi9Kvlsj #NUFC pic.twitter.com/jSU1nOU8U8

Newcastle narrowly missed out on Champions League qualification that season but could look forward to a renewed effort in 2012-13. Or so they thought.

With his unrivalled ability to misread the situation, Ashley failed to invest in the squad that summer. Pardew’s side struggled to balance league and European commitments and fell into a relegation battle.

Hence the trolly dash of January 2013. Financed by the sale of Ba to Chelsea, Newcastle bought Mathieu Debuchy, Yanga-Mbiwa, Yoan Gouffcran, Massadio Haidara and Moussa Sissoko in scenes reminiscent of a returning holidaymaker raiding the duty-free at Calais.

Pardew refused to speak to the players in their native tongue, telling the Evening Standard: “I won’t even say anything in French, not even ‘Oui’. My job is to integrate them and the way I do that makes them speak English as quickly as possible.”

This only served to deepen divisions in the dressing room. Talk of discord and disunity dominated the fall-out of one 6-0 capitulation against Liverpool that left Newcastle perilously close to the drop.

“I don’t think it’s a healthy thing to have too many French players in one dressing room,” said Alan Shearer amid reports that the French players cared less about the club’s fate than their English counterparts.

Newcastle did avoid the drop that season, and reached the Europa League quarter-finals, but the sense of wonder that accompanied the first Gallic imports had gone.

Florian Thauvin was drafted in with the profits from Cabaye’s sale to PSG in 2014 but the highly-touted youngster failed to deliver in England. He only lasted half a season before being shipped back to Marseille on loan.

His most notable contribution occurred when he arrived at a home game sporting a tuxedo and bow tie, which some say caused Shearer to lose all of his remaining hair in anger.

Never forget the time Florian Thauvin turned up to St James' Park on matchday in a tuxedo. Iconic. #NUFC pic.twitter.com/5lOzijcObp

But it was two other factors that hastened Newcastle’s demise.

Financed by a new billion-pound television deal in 2014, all Premier League clubs were armed with the potential to shop for bargains around the continent. Suddenly, Newcastle weren’t the go-to option for aspirational Ligue 1 players.

To counter this, Newcastle slowly migrated north towards the Netherlands in an attempt to uncover a new market – and the likes of Vurnon Anita and Siem de Jong did nothing to change the Eredivise’s reputation in English football.

Newcastle slipped out of the top flight in 2016, despite their £80million transfer splurge the previous summer. A cautionary tale for the current regime, perhaps.

Whatever future success lies in wait, Newcastle are unlikely to be as closely associated with one nation as they were with France in the early-2010s.

But, if that scenario does come to pass, the Toon Army can dust off the berets and down pints of merlot in ‘La Fraise’ like they were 10 years ago.