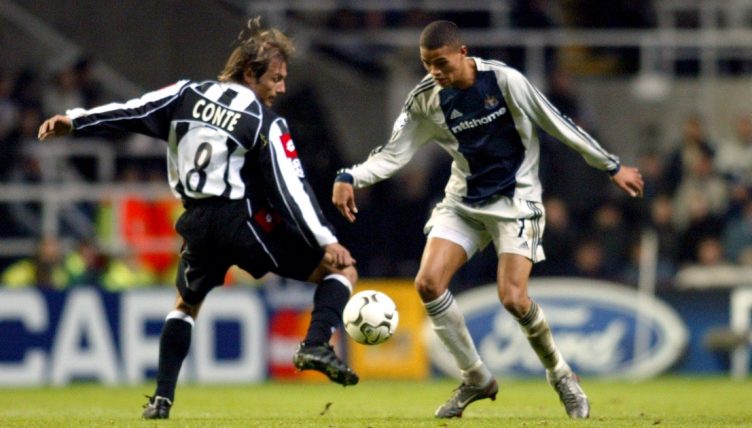 Newcastle United fans are used to watching their team defy the odds, for good or bad, and things have never been more dramatic than in 2002.

Bobby Robson’s team qualified for the Champions League through the play-offs, having pipped 2001 semi-finalists Leeds United to fourth spot in the league the year before, but games against Juventus, Dynamo Kyiv and Feyenoord ensured their passage wouldn’t be easy.

Sure enough, three straight defeats in the first three games left them needing to effectively run up a vertical wall. However, as they would soon show, nothing is impossible.

Not only did Newcastle fail to pick up a point from any of those three games, they failed to even score a goal.

“Had Juve scored five as they did last week against Dynamo Kyiv, then Newcastle could not really have complained,” wrote The Guardian’s Michael Walker, describing the English side as being “outclassed”. At that point, the prospect of Robson’s team getting just one win – let along the three they needed – seemed far-fetched.

However, if you’re going to pursue an unlikely task, there’s nothing like an unlikely moment to give you the belief to push on. When Juventus travelled to Tyneside, Andy Griffin’s last goal was more than two years ago and he had never netted in Europe. No bother…

🔙 2002 | Andy Griffin scored the only goal of the game in an historic 1-0 win for the Toon vs Juventus at St.James’ Park in the UEFA Champions League.pic.twitter.com/pfq7BgbLFy#NUFC #UCL #Juventus 🏆

The dream was still alive, but it remained extremely precarious. Had Marcelo Zalayeta’s late effort dropped under the bar instead of cannoning back off it, that would have been that.

The other game on the same night brought a victory for Dynamo Kyiv, and when Maxim Shatskikh put Oleksiy Mykhaylychenko’s team ahead at St James’ Park, Newcastle’s task was doubled and then some: instead of needing one goal in 90 minutes, as was the case in the previous game, they now needed two in less than 45.

Ultimately they needed just half that time again, with Gary Speed’s header and an Alan Shearer penalty – awarded by a replacement referee after the original man in the middle was forced off injured – ensured the turnaround.

It wasn’t all complete, though: going into the final round of games, Dynamo had seven points, Newcastle had six and Feyenoord – due to host Robson’s men at De Kuip – had five. ‘All to play for’ was an understatement.

After 49 minutes, it was scoreless in Kyiv while goals from Craig Bellamy and Hugo Viana gave Newcastle a 2-0 lead in Rotterdam. It’s never easy, though.

Almost instantly after Viana beat Patrick Lodewijks to double his team’s lead, Maksim Shatskikh – who had put Dynamo a goal to the good in England – struck again against the already-qualified Juventus to shake up the as-things-stand table once more.

Juve weren’t ready to lie down – the two Marcelos, Salas and Zalayeta – turned things around to give them the lead within 15 minutes – but neither were Feyenoord.

Mariano Bombarda halved the deficit on the stretch and Anthony Lurling volleyed in an equaliser. The Dutch side, who hadn’t scored in more than 400 Champions League minutes, were now suddenly on the verge of a miracle of their own. Despite surrendering their own lead, Dynamo Kyiv were on the verge of scraping through thanks to their superior head-to-head record over Newcastle.

Late drama involving English clubs in Europe was hardly new, with Lúcio’s goal for Bayer Leverkusen condemning Liverpool to a late exit in the previous year’s competition, and efforts from Alan Smith and Lee Bowyer in the final 10 minutes of games helping see Leeds into the knockout stages in 2001.

Sure, Newcastle could have tried cruising to a comfortable victory, but that wasn’t in their DNA. This was a season in which they scored twice in the final 10 minutes to scrape a draw at Liverpool and twice in the final five to turn a 1-0 deficit into a 2-1 win over Everton.

If they were going to win, they’d first need to give their opponents a sniff of glory, like dangling a string of sausages for your dog and just hoping he inexplicably gets distracted while running past them. Paul Bosvelt missed a chance to put Feyenoord 3-2 up, and then – after some fantastic yet broadly forgotten work from Kieron Dyer – Bellamy squeezed in a 90th-minute winner.

It feels as though there’s a deep fragility to the winning goal, as if everything could collapse at any given moment.

As Dyer gracefully skips through the defence, there’s a sense he needs to do everything on instinct because if he sopped to acknowledge the state of play it would cause his legs to buckle under him.

Similarly, other players in Bellamy’s situation might feel the need to take a touch, assess their bearings, and only then decide whether to shoot or look for a pass. But had the Welshman done that, the opening might well have disappeared within a second.

🗓 November 2002 | #NUFC line up for the epic Champions League game vs Feyenoord in the De Kuip Stadium in Rotterdam.

When the second group stage rolled around, Newcastle clearly looked at their dramatic comeback and decided they fancied a bit more of the same.

Within 10 minutes of kickoff against Inter, the Magpies were a goal and a man down, and then a 2-0 loss in Barcelona left them on course for another improbable rebound. After all, if you want to achieve the near impossible it requires you to make things tough for yourself.

It didn’t work, though. Despite two wins over Bayer Leverkusen, their fate was all but sealed by Ivan Cordoba’s equaliser in the return match in Milan, with defeat at home to Barca confirming the inevitable.

“Newcastle’s fans have grown accustomed to sweeping drama, as witnessed at San Siro last week, but this was a short story by comparison,” wrote Walker. “And at the end there was no twist.”

READ NEXT: A forensic analysis of Lee Bowyer’s on-pitch fight with Kieron Dyer