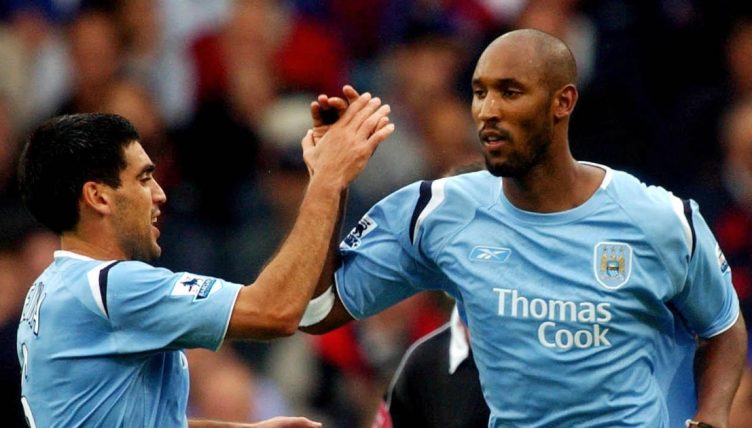 Nicolas Anelka achieved a lot in his career. In between those achievements, he spent 30 impressive months with Manchester City.

There aren’t too many players with a combination of decoration and longevity quite like Nicolas Anelka.

The Frenchman has won the Champions League, Premier League, Serie A and European Championships, among other honours, but 15 years passed between the first and last of those trophies.

The strange thing about Anelka, however, is that those 15 years didn’t entirely take place at the pinnacle of the game: for two and a half years, he was playing his club football for a Manchester City side which finished outside the top six throughout.

Anelka would have been a good fit for later iterations of City, including the newly-minted version which finished third when he was hitting double figures for league runners-up Chelsea, but that’s not when he played for the club.

Instead, he joined City fresh from their promotion to the top division in 2002, when they sought to avoid another immediate relegation, and he played a big part in ensuring they achieved their aim.

Anelka, who had shown promise during a loan spell at Liverpool the previous season, was part of a summer spending spree which demonstrated the direction the club hoped to take under Keegan.

His Paris Saint-Germain colleague Sylvain Distin also made the switch that summer, while veteran Peter Schmeichel added experience and loan signing Marc-Vivien Foe provided international pedigree. Young striker Matias Vuoso also joined the club, but there won’t be many fans who are especially keen to recall his stint.

One of the most notable moments in that first season saw Anelka come back to haunt a former club, as is so often the case, hitting a late winner against Liverpool which played a big part in denying Gerard Houllier’s side a Champions League spot.

It was the kind of thing we came to expect from the striker during his time in England, whether as a youngster at Arsenal, a Premier League golden boot winner with Chelsea, or at many of his other clubs. His confidence in scoring almost leapt out of the screen towards those of us watching at home, to the point that even the neutrals somehow sucked the ball into the back of the net.

Another memorable moment from that season, however, showed off a different side of Anelka.

Many Premier League fans will only remember the name Niclas Jensen for one thing, if that, but without a penetrating run from the right and absolutely pinpoint left-footed cross, we wouldn’t even have that.

Anelka only registered 11 assists in his entire time as a Manchester City player, so we can probably say with confidence that this was the best one.

And yet, for a player best known for finishing off moves more than for bringing them to life, it feels like a nice added bonus, like when a cafe gives you a free bit of chocolate with your espresso. You didn’t think you needed it to enhance your enjoyment, but now it’s there you can’t imagine ever being without it.

Absolute rocket. A strike that had everything! ⚡️ pic.twitter.com/HgB0Z9Jhdv

While Anelka finished his first season with 14 goals in all competitions, he almost doubled that in his sophomore year, helping City ensure their move to a shiny new stadium didn’t end in a nightmare relegation.

From the start of the season right up until mid-February, City won just four Premier League games. Anelka was among the scorers in all of them. He ended the season with 16 league goals – the same number Michael Owen netted ahead of a move to Real Madrid – and eight in the cups. It took until 2009-10 for another City player to even reach 16 in all competitions.

He left the club midway through that season, making a multi-million pound move to Fenerbahce and finishing the season as a Super Lig champion, but the parting gifts in 2004-05 gave City fans plenty to remember him by.

When Manchester City were taken over in the late aughts, first by Thaksin Shinawatra and then by their current owners, a consistent run of seasons as a top-flight club was probably a factor.

Would the same owners have invested in a club that needed to win promotion before being put in a position to challenge for honours, or one which needed to fight for mere safety as a priority?

While there have been plenty of criticisms of Anelka – earlier ones over his attitude (was he really uniquely miserable or divisive at the time to warrant being nicknamed ‘Le Sulk‘?) and more recent, more notable ones over his use (and subsequent defence) of the Quenelle – there’s no questioning his impact on the game.

From scoring the goal which helped Chelsea pip Liverpool to Champions League football, prompting Roman Abramovich’s takeover, to the strikes which laid the foundations for investors from Abu Dhabi to rock up in Manchester a few years later, English football might look very different without him.

And that time at City wasn’t without its memorable on-field moments either.