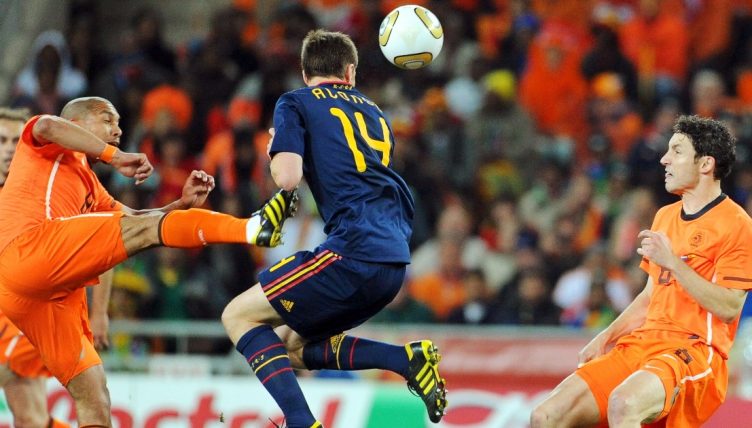 The Netherlands entered the tournament with a back four of Gregory van der Wiel, Johnny Heitinga, Joris Mathijsen and Giovanni van Bronckhorst. How could Bert van Marwijk guide his team to success with such a shoddy defence? Well, by putting two of the toughest b*stards around in front of it.

It was a football purist’s nightmare, but a sh*thouse enthusiasts dream. Naturally, we loved it.

Prior to the World Cup in South Africa, the prospect of a De Jong-Van Bommel pairing was not a popular one in the Netherlands.

De Jong, nicknamed the “lawnmower” as he cut down everything in his way, was the least Dutch midfielder around. He offered very little going forward or on the ball at all. Instead, his sole function in a team was to break up attacks, win the ball and lay it off to the more creative players.

Van Bommel meanwhile, did admittedly offer more with the ball at his feet, but he also happened to be one of the nastiest blokes around. He was that kid at school who’d pick a fight with anyone who looked at him, and that included his team-mates.

For a nation so hellbent on playing the right way™, playing both of them in midfield seemed unthinkable, especially given the alternative options. With Wesley Sneijder occupying the No.10 position, many wanted to see Real Madrid’s Rafael van der Vaart slot in further back.

Clarence Seedorf was also a popular choice, but, much to the annoyance of many fans, Van Marwijk had refused to call the AC Milan man up since he took over.

Instead, the manager was unwavering in his belief that, in order for his side to succeed in South Africa, it had to feature two midfielders solely tasked with protecting the flimsy backline.

So, incurring the wrath of the Dutch press and people alike, he sent his men out for the opening game against Denmark with De Jong and Van Bommel side by side in the starting XI. And so it began…

Stamping out the haters

A team with the pair at the heart of it performed exactly as you’d expect in that first game. The football? Sh*t. The result? Good. It was the same story throughout the group stages as the Dutch followed up on their 2-0 win by beating Japan 1-0 and Cameroon 2-1.

They hadn’t played exciting football and failed to win by a comfortable margin against any of their three relatively easy opponents. However, they also hadn’t conceded a goal from open play and looked shockingly stable at the back. De Jong and Van Bommel were a huge reason for this.

The former would sit in front of the defence and patiently wait for opponents brave enough to enter his domain. When they did, they’d more often than not be greeted by a crunching tackle. Remarkably, only one of these said challenges was deemed worthy of a yellow card in the group stages. Looking back at them now, De Jong easily could’ve seen more, and they easily could’ve been a different colour.

His partner in crime was a more subtle master of the dark arts. While De Jong held station, Van Bommel would roam around the pitch causing trouble. Nudging opponents, leaving a foot in late, tugging shirts, pestering the ref – he had every trick in the book of sh*thousery.

The two were as solid as ever in the side’s comfortable victory over Slovakia in the last 16, again ensuring that they didn’t concede from open play. However, they were about to face their first real test of the tournament, the bookie’s favourites, Brazil.

Few expected the Netherlands to prevail. Despite looking defensively sound, they had ultimately only faced opponents they were expected to beat. Most felt they hadn’t shown anything in these games to suggest they could overcome a top side.

Brazil, on the other hand, had just lit up the tournament with a 3-0 thrashing of Chile. In that game, their front three of Robinho, Kaka and Luis Fabiano had looked near unstoppable.

The quarter-final began just as everyone had expected, as Robinho made it 1-0. Mathijsen had injured himself during the warm-up and pulled out, so the backline was more fragile than usual. De Jong and Van Bommel’s protection was needed now more than ever.

The two rose to the occasion. De Jong was influential in shackling Kaka, giving him next to no time and space. When the Brazilian looked set to drive into the Dutch penalty area, the Man City man went flying in, taking him out but, crucially, taking the ball along with him. To make that kind of tackle in the box, in a World Cup quarter-final, is absolutely mental, and we absolutely love it.

Van Bommel, meanwhile, was everywhere. Not only was he as formidable as ever at the back, but he was even making an impact going forward, almost getting on the end of a Dirk Kuyt cross the equalise. Who needs Seedorf?

The two were key in the deficit remaining just one goal, and their efforts for rewarded when a Wesley Sneijder ‘double’ (the first was questionable) put their nation ahead. It was a backs against the wall job from that point onwards.

Van Bommel provided an absolute masterclass in time-wasting with his constant niggly fouls. He made three in the final five minutes alone yet somehow avoided receiving his first booking of the tournament. At this point, you couldn’t help but wonder what dirt he had over the tournament officials. De Jong, however, wasn’t so lucky and would be suspended for the semi-final.

If their importance to the team wasn’t already obvious to onlookers, it certainly was after the semi-final. It was the first time the pair hadn’t started together and the first time the side conceded multiple goals from open play. That wasn’t a coincidence.

Still, a 3-2 win over Uruguay was enough to see them through to the final where they’d face Spain, who were technically excellent but physically fragile. The Netherlands’ hit-men were licking their licks.

PS. In that semi-final, Van Bommel finally received his first booking of the tournament, not for a foul, but for kicking the ball away. In response, he absolutely *nailed* the “who, me?” reaction.

De Jong and Van Bommel had finally won over their home nation over with their performances. If they could help the side win its first-ever World Cup, they’d go down in history as heroes. If only…

The chant “Get into ’em, f*ck ’em off!” can often be heard ringing around English stadiums. By the looks of it, it is also what Van Marwijk told the duo before the final kicked off.

After a tame opening 10 minutes, Van Bommel made his Mark on the final by shoving former team-mate Carlos Puyol to the ground. He then turned his attention to Andres Iniesta, sliding through the back of him. He was handed a yellow card, but it easily could’ve been red.

That was the case even more so for De Jong around 10 minutes later. His karate kick on Xabi Alonso became one of the tournament’s most famous photos, and in it, you can see Van Bommel lurking in the background, almost to say “if he doesn’t get you, I sure will”.

Perhaps it was guilt, perhaps it was relief, but De Jong actually settled down after that. The same couldn’t be said for Van Bommel, who charged around like the Spanish had killed his dog.

As the match turned into more of a brawl, the duo managed to keep the Spanish midfield at bay. Perhaps more impressively, they managed to keep Howard Webb from showing them red. When Iniesta finally scored the winner in the 116th minute, it was Heitinga that had been sent off and Van der Vaart, who came on for De Jong, who was playing him onside.

Nevertheless, as Spain celebrated and the Netherlands mourned, De Jong and Van Bommel became the main targets in criticism of the latter’s “anti-football”. This was even the case on the homefront, with Johan Cruyff dubbing the performance “ugly and vulgar”

Ultimately, though, the two had proved that, while beautiful football is all well and good, if you want to win something, you need players willing to do the dirty work, and then some.

If the Dutch hope to lift some silverware in the next few years, they’ll need just that. Finding players capable of that level of sh*thousery is no easy task though. They’re a rare breed, and we’re just glad we saw two masters of the craft play alongside each other.