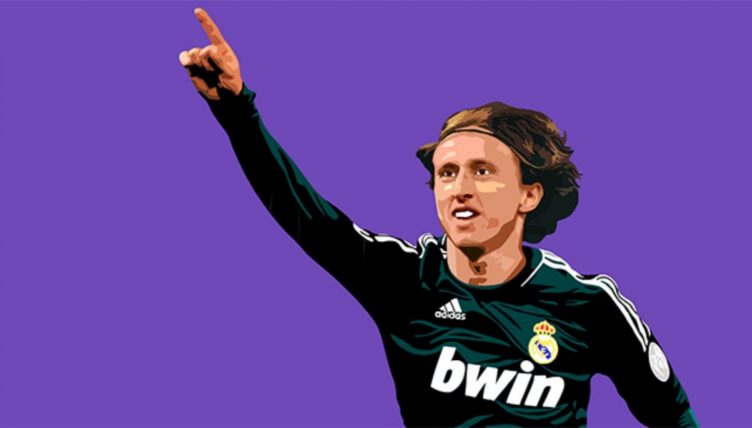 Luka Modric has been a Real Madrid mainstay for 10 years and is widely regarded as one of the best midfielders in the world. But it could all have been so different for the former Tottenham man…

Modric had established himself as arguably Spurs’ most influential player by the time he departed White Hart Lane in 2012, but when it comes to Real Madrid, past achievements count for little.

Best player at the last World Cup? Well, you’re not the best player here. Star of another league? Doesn’t matter, you’ll be starting again at the Bernabeu.

This was arguably especially true of the pre-Decima era, with loyal supporters so keen to celebrate their new heroes that it felt as though expectation could tip over into demand.

There are the privileged few who are afforded more time, of course, almost exclusively local ‘golden boys’, but for everyone else, fan approval is as close as possible to a meritocracy at the top level.

Those who arrive as lesser lights can earn themselves hero status, but those that arrive with big reputations need to back it up on the pitch before goodwill evaporates.

Well, Luka Modric is still at Real – and with five Champions League medals to boot. 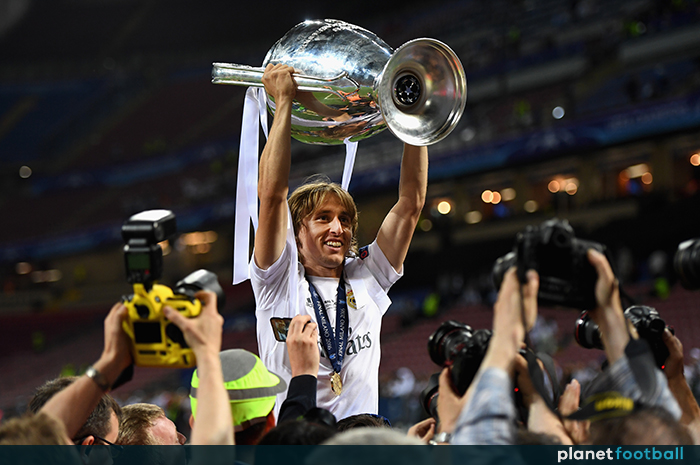 That he has established himself at the Bernabeu can be put down in no small part to one game in particular.

Despite joining for around £30million, Modric did not find himself guaranteed a starting berth initially – nearly half of his first 25 games for Madrid came from the bench.

Jose Mourinho’s team had won La Liga the previous season, scoring an obscene 121 league goals, so there was only ever likely to be room for one of Modric and fellow new arrival Michael Essien at most.

A moment of inspiration was required for Modric to mark himself out above the rest, and it would come in Europe, in a Champions League knockout tie against Sir Alex Ferguson’s Manchester United.

Modric was watching from the bench as Danny Welbeck stunned the Madrid crowd in the first leg, only making it on for the last quarter of an hour, long after Cristiano Ronaldo’s equaliser, and he again started on the bench for the return leg.

Things did not look good for Real when United, who had not lost a home Champions League knockout game since 2005, took the lead through a Sergio Ramos own goal shortly after half-time.

But games between top European clubs can often hinge on the smallest of margins. Things like a tight offside call, or a player slipping on the run-up to take a penalty.

Or, in this case, Nani’s red card.

Whichever side of the fence you sit on regarding the harshness of that red card, just as crucial to the sending-off in deciding the tie was Mourinho’s instant response to the decision.

He might have opted to force things by introducing a more attack-minded player like Jose Callejon or Karim Benzema, but instead, he opted for Modric.

Heading to Old Trafford, Modric had scored just once for his new club, the fourth in a 4-0 demolition of Real Zaragoza in La Liga.

Mourinho, however, seemed in no doubt as to the switch so we can probably credit him for recognising Modric’s ability to take advantage of the extra space afforded by Nani’s absence.

And it didn’t even take 10 minutes for his decision to be vindicated. 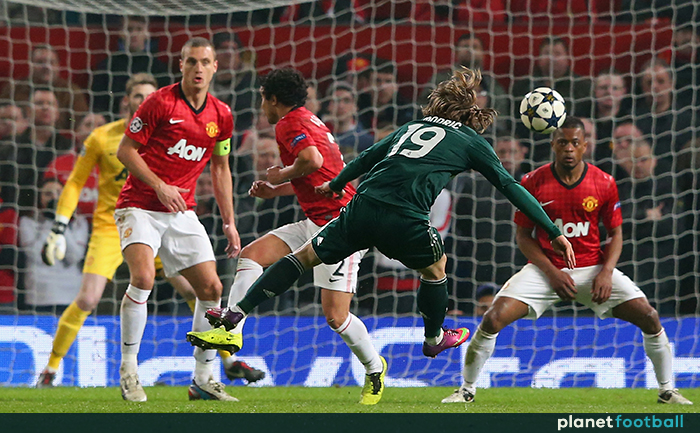 For a little while, United looked like they might be capable of a famous backs-to-the-wall job. There were still 25 minutes on the clock, but a midfield including Ryan Giggs, making his 1000th appearance, was doing a good job of closing off space.

These are the moments where heroes emerge by producing something no one else would be capable of in the same situation. In the case of Modric, however, it was something even he should not be capable of.

He had a fraction of a second to dart right to evade the charging Carrick and get his shot away, and even then there was barely any net for him to find: a taller left-back than Patrice Evra might have seen the ball glance off his head, while a shot that beat David de Gea with a fraction more pace or less swerve would have bounced back off the post rather than spinning into the net.

It was, in short, a near-superhuman act. It didn’t matter that Modric wasn’t seen as the sort of player capable of such magic before that game – at least not outside London and Zagreb: he had achieved it now, which meant he’d always had it in him.

Madrid still needed another goal, but against a deflated 10 men it only seemed a matter of time. Indeed, in the end, it felt surprising that Ronaldo’s winner was the only other goal of the game.

Had Ronaldo been the man responsible for that first goal – or, indeed, had Modric’s shot rebounded off the post to present his team-mate with a tap-in – it could well have been a very different story for the former Tottenham star.

Instead, Essien was allowed to return to Chelsea, Alonso was let go in the summer of 2014, and Khedira joined Juventus one year after that.

Modric is still there and still an integral part of the team, nine years and several managers later.

Rarely has a half-hour cameo made such a lasting impact, but there are plenty of people who will be glad it did.

READ NEXT: Rating the 25 players Madrid have signed from the Premier League