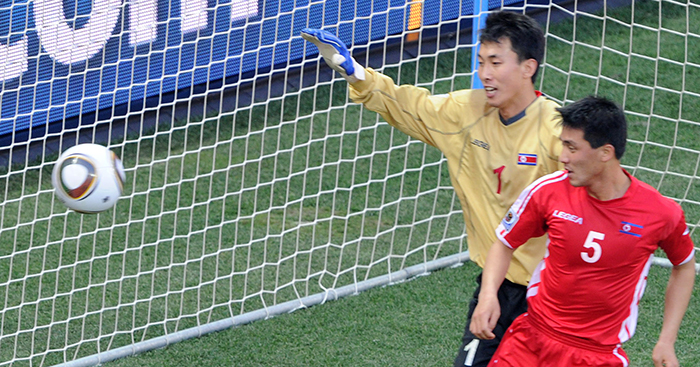 At the 2010 World Cup in South Africa, North Korea registered Kim Myong-won, a striker, as one of their three designated goalkeepers. The decision backfired.

In their opening match of the tournament, North Korea surprised everybody.

Facing Brazil, one of the best attacking sides in the world, the ‘Chollima’ looked destined for embarrassment.

But the underdogs played above themselves, keeping Brazil at bay for 55 minutes and only going behind through a sublime goal from Maicon. The match eventually finished 2-1 to Brazil, but the North Koreans more than showed their worth.

Their substitutes bench for the Brazil match comprised just seven players — five fewer than the capacity of 12 — with four members of the squad marked as ‘absent’ on the team sheet. 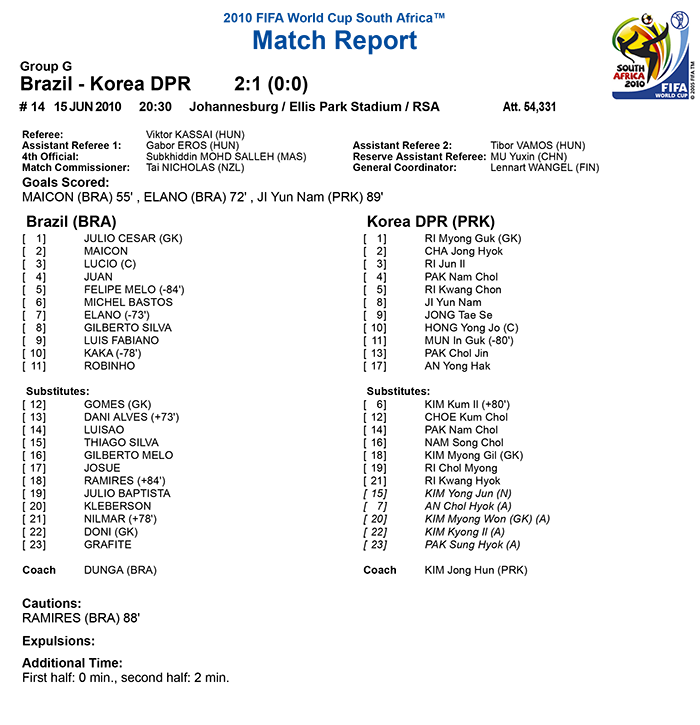 Where had the quartet gone?

Unverified reports suggested that at least two of the players had fled to seek asylum in another African country, though FIFA and North Korea quickly denied that this was the case.

As it turned out, the four ‘missing’ players had been with the squad all along; coaching staff had simply omitted the names of those not expected to feature, perhaps believing the usual seven-man bench to be the requirement.

Although the selection mystery has never been fully explained, one of the four absentees probably wasn’t expecting to play anyway…

Imagine your joy when you receive the call: You’re in the World Cup squad!

Pack your bags for South Africa, because this is your moment — a once in a lifetime opportunity. You’ll be rubbing shoulders with the likes of Lionel Messi and Cristiano Ronaldo. Four hundred million viewers will be watching your every move.

The joy does not last. It turns to confusion. Confusion turns to despair.

You, a striker, are going to the World Cup, but there’s a significant, inescapable caveat: you are going to be registered as a goalkeeper.

So if anybody asks — and ask they might — just tell them you’re a goalkeeper.

This was the poisoned chalice handed to North Korea’s Kim Myong-won, then a 26-year-old striker playing for Amrokkang Sports Club, who was called up by national team manager Kim Jong Hun as part of an ill-judged plot to fill the squad with forwards.

The idea was to register Kim as the third goalkeeper in the squad but field him as a striker should they need him.

Doing so, North Korea believed, would allow the team to get around FIFA’s requirement that each squad contain three goalkeepers.

The scheme backfired before a ball had even been kicked. On June 3, 2010, FIFA caught wind of what was going on and intervened:

“The three players listed as goalkeepers can only play as goalkeepers during the World Cup and cannot play outfield,” a statement read. “This will be communicated to the teams in the team arrival meetings and will be enforced on match days.”

FIFA added: “Kim Myong-won will not be allowed to play as an outfield player if he has been put on the list as a goalkeeper.”

Twelve days later, Kim was — intentionally or otherwise — left out of the squad to face Brazil, and would not play a minute at the tournament.

Although it’s easy to see FIFA’s ruling as just and sensible, it is worth noting that the official tournament rules and regulations weren’t quite as black and white as the retroactive statement, which was issued after the squads had been submitted.

The initial regulations simply stated that “Each association will…be required to provide FIFA with a final list of no more than 23 players (three of whom shall be goalkeepers).”

Nowhere did it say in explicit terms that those goalkeepers would be prohibited from playing outfield.

In actual fact, it becomes easier to sympathise with North Korea — or, at least, with the luckless Kim — when you consider other factors.

For one, there is nothing in the laws of the game that prevents goalkeepers from playing outfield. According to the IFAB, goalkeepers and outfielders must simply be distinguishable from one another; who fills those positions is a matter for the manager to decide.

FIFA’s ruling that “goalkeepers can only play as goalkeepers” is therefore not an IFAB-approved law, but a regulation particular to the World Cup.

Secondly, there is at least some precedent for goalkeepers playing outfield in other competitions.

In that instance, substitute keeper Nicky Weaver replaced a midfielder and went in goal, while James took a spare outfield shirt to move up front. North Korea presumably envisioned a similar occurrence with Kim.

Throwback to when Stuart Pearce subbed Nicky Weaver on for an outfield player & stuck David James up front against Middlesbrough. Despite having Jon Macken, an actual striker, on the bench. #MCFC pic.twitter.com/vQia6oi1Tr

Thirdly, though this might be a bit of a stretch, the decree that “goalkeepers can only play as goalkeepers” seems like it could produce an unfair match situation.

If, for example, a World Cup goalkeeper (with reasonable outfield abilities) suffered a severe arm injury, the regulations would prevent that goalkeeper — now, let’s say, unable to make saves with his hands — from swapping positions with a healthy-handed outfielder.

If that side had used all three substitutions, it would presumably have to risk keeping its injured goalkeeper in goal… or simply remove the goalkeeper from play while placing an outfielder in goal and finishing the match with 10 players. Neither option seems as sensible as simply switching the keeper with an outfielder.

For all their attacking intent, the Asian side would score just one goal at the 2010 World Cup: Ji Yun-nam’s 89th-minute consolation against Brazil. And Ji, for what it’s worth, wasn’t one of their four and a half strikers.

Now 34, Kim will surely never make a World Cup appearance, but the bizarre ploy of 2010 means he will always be remembered as a footnote in the competition’s history.