Liverpool’s bid to win the Premier League title has had several close calls. And in 2018-19 they finally perfected the art of the near miss by accumulating a whopping 97 points and still somehow losing out.

Jurgen Klopp’s side were defeated just once and, while that seems incredible, it was almost grimly predictable for supporters of a club who had lost twice in the league 10 seasons previously, in 2008-09, but missed out on the title then, too.

Rafa Benitez’s side eventually finished four points behind Manchester United but gave Fergie’s side a serious scare after memorably thrashing the Red Devils 4-1 at Old Trafford and closing the gap further when the champions suffered a 2-0 defeat at Fulham the following week.

It took the unlikely figure of Federico Macheda to rescue a wobbling United with late winners in their next two games and, from there, the Merseysiders were kept at arm’s length.

Liverpool were ultimately undone by a series of draws that season. While the 4-4 with Arsenal will stick long in the memory, others were forgettable but hugely costly. A 0-0 at Aston Villa, goalless draws at home to Fulham and West Ham, a pair of 0-0s with Stoke, a 1-1 at Wigan.

The two defeats? One away to Middlesbrough, the other at Tottenham.

Spurs shipped more away goals than bottom-club West Brom that season having finished way down in 10th place the year before after conceding a whopping 34 times at White Hart Lane.

But while their defence was porous, Spurs fans at least had the joy of Robbie Keane and Dimitar Berbatov smashing in 30 Premier League goals between them in 2007-08, Tottenham outscoring everyone at home bar champions United.

Imagine, then, if Liverpool had had Robbie Keane in their ranks in that 2008-09 campaign, a proven scorer and creator to join forces with Fernando Torres and give the Reds the most potent strikeforce in the land. All those draws become wins and Liverpool win the title.

Except, and it would be easy to forget… Liverpool did have Keane that season, paying an initial £19million to sign him from Spurs on July 28.

Peter Crouch had done well for the Reds during his time, but selling him to Portsmouth and bringing in Keane seemed like an obvious upgrade.

This was perfect. Keane was a boyhood Liverpool fan (yeah, yeah) and had scored 80 goals for Spurs in 158 league games. In other words, a one-in-two man. Play him in 30 games and he’d surely give the Reds 15 goals, plus plenty of assists for Torres.

Liverpool kicked the 2008-09 season off with a home Champions League qualifier against Standard Liege which Keane started but did not finish as Benitez looked to change things up in search of a goal which never came in a 0-0 draw.

It was the start of two worrying trends from Keane’s point of view.

Keane played the full 90 just three times in that run. And often he was taken off with the game still deadlocked. It was pretty clear that, deep down, Rafa didn’t really trust him.

Keane had to wait until October to score for the first time in a red shirt. The second goal in a 3-1 win over PSV Eindhoven in the Champions League, it came in the 34th minute. Rafa substituted him in the 75th.

He added another against Atletico Madrid, but it took until November for Keane to get off the mark in the Premier League with two first-half goals to set the Merseysiders on the way to an easy win over West Brom.

Could Keane get his first Liverpool hat-trick? No. Rafa substituted him with 18 minutes still to play.

Something wasn’t quite right, but the more reasoned Liverpool fans were cutting Keane plenty of slack. The guy was still only 28 and in his football prime. And a game based on intelligence more than flat-out, raw speed suggested he had plenty of good years in a red shirt ahead of him.

Lift off at last

And then it happened. Lift off. Keane went another three games in the Premier League without a goal after those two against West Brom, but then either side of Christmas he scored in a 1-1 draw at Arsenal and then two more in a 3-0 home win over Bolton.

The goal at Arsenal was particularly special, showcasing everything fans had expected from him when he signed.

It began with a long punt upfield from Daniel Agger that you’d have to be in a generous mood to suggest was intended for Keane. But he gambled on it. And that had always been Keane in a nutshell. He looked quicker than he was because he took a chance on there being an opportunity before defenders had even considered the possibility.

Still, in this case, there was plenty left to do. When the ball bounced, 30 yards from goal, he had Johan Djourou and William Gallas right there with him. When it bounced again, inside the penalty area, Gallas had caught him.

Given how the season had gone for him until that point, he could have been forgiven for taking a touch. Gallas would almost certainly have nicked it away from him had he have done, but that’s sometimes a blessing for a striker lacking confidence. You almost want the chance to be taken away from you.

Not Keane. If he had indeed lost any confidence, it certainly didn’t show. F*ck taking a touch. He smacked it into the top corner on the half volley. Manuel Almunia was planning for a low shot into the opposite corner, but Keane didn’t give him the chance to readjust. Thwack, have that.

Five days later Keane added a brace against Bolton to make it four goals from his past four Anfield outings. And this time, unlike against West Brom earlier in the season, Benitez gave him the full 90 minutes.

‘Robbie Keane can now safely assume that he will not leaving Liverpool in January,’ began the match report in the Daily Telegraph.

‘Keane did more than simply score two crisp goals to take his tally to five goals in seventeen league games,’ it read. ‘He pulled Bolton’s overworked defenders all over the pitch, ran himself into the ground and, not insignificantly, he was even allowed to complete the ninety minutes, a rare privilege for the Irishman.’

It spoke of the prospect of Keane scoring goals alongside rather than instead of Torres, who was short of fitness, but it was a prospect which never materialised.

The truth is that Benitez had really fancied him, playing him as an isolated lone striker or out on the left wing – and substituting him no less than 18 times. 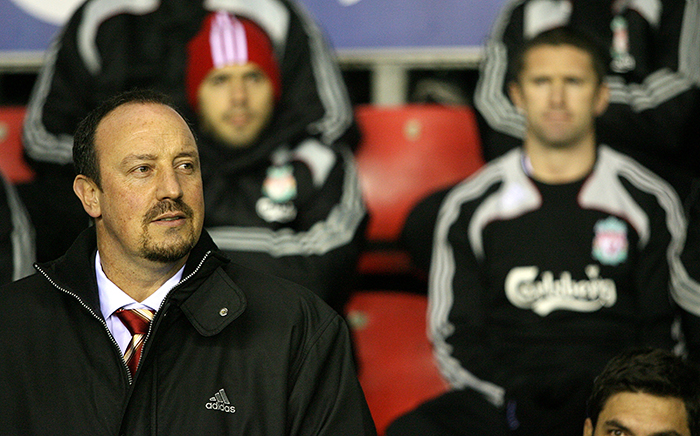 But there was more than that. Benitez, at that time, was involved in a power struggle with disastrous American owners Tom Hick and George Gillett. Keane’s exit suggested he may have been an unwitting pawn.

When that happened, he looked glad to be gone and back in the welcoming bosom of Spurs. The “dream move” had turned into the “wrong move”.

Right man at the wrong time?

“He told me he wanted me as a second striker with Torres,” Keane said shortly after his move back to White Hart Lane. “But, unfortunately, Torres was injured so we only played a few games together.

“I was playing as a lone striker and everyone knows I am not a target man. He used me left wing sometimes, which is not my game. I played out of position a few times.”

One comment in particular ramped up the wistfulness levels for Liverpool supporters. “With a different manager there,” said Keane, “possibly it could have worked.”

Keane and Liverpool are the classic case of what might have been. A man with the skills, likeability and goalscoring prowess to be an Anfield legend. But a man who lasted just 189 days there.

That near-miss season ended with Keane scoring at Anfield on the final day.

But rather than it being the goal that secured Liverpool the title, it was a consolation for Spurs in a 3-1 defeat.

Brilliant player. Scorer of 319 goals for club and country. Loved by fans of Spurs, a hero for the Republic of Ireland and even a Hollywood star in his latter days at LA Galaxy.

But for Liverpool, a curious bit-part actor written out of the show in the highly-acclaimed season five of Rafa’s Anfield reign.