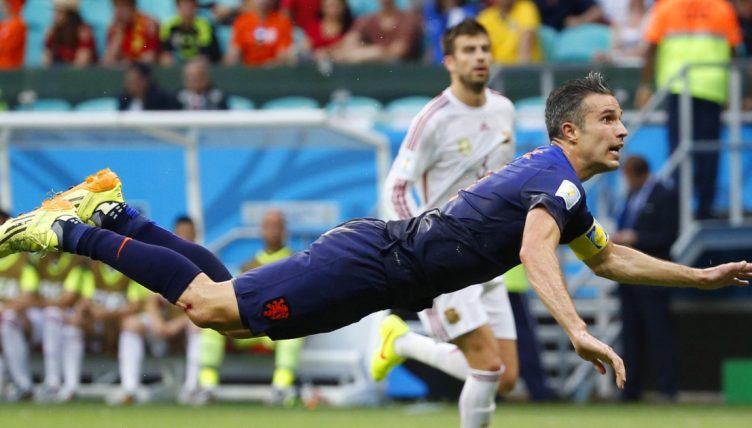 Dutch footballers are certainly no strangers to scoring stunning World Cup goals. Giovanni Van Bronckhorst’s strike in 2010 left South Africa stunned, and the way Arjen Robben outpaced Sergio Ramos and embarrassed Iker Casillas in the summer of 2014 should be illegal.

The first of five his team put past Spain, Van Persie didn’t seem troubled that his team had surrendered the lead after Xabi Alonso converted a penalty in the 27th minute.

A fairly innocuous match for either side through the majority of the first half, though Spain enjoyed the better sights of goal. David Silva missed a pearl of a chance to put La Roja two up after 43 minutes when Andres Iniesta played him in on goal.

It is always incredible to look back at these kinds of moments and consider their impact on a match and the sport as a whole.

Should Silva have tried to slot the shot underneath the standing Jasper Cillessen rather than chip him, Spain could have easily led 2-0 at half-time, controlling the psychological advantage and what unfolded after the break may not have happened.

During his stints at Arsenal and Manchester United, Van Persie was always known as a clinical finisher. Whether it was a volley from 20 yards or a strike from an acute angle, his ambition and technique were commendable.

His swagger is a characteristic that lots of people with his ability share, but he had a joker-like grin on his face whenever he did something unbelievable on a football pitch.

Speaking of which, let’s get to this goal.

The best strikers in the modern game make run after run, most of which end with them being ignored for a more conservative option. It’s a thankless task most of the time but, occasionally, it gets rewarded.

In his prime, Van Persie specialised in unique runs that, though he may not have been the quickest, got the separation he needed to have room for a go at goal. Peeling off the back of a defender or simply knowing when to hold his run instead of wasting energy, he had it down to a science.

Evaluating his movement for this particular goal you can see, as Daley Blind gets the ball on the left touchline near midfield, Van Persie is situated between left-back Jordi Alba and centre-back Sergio Ramos.

Surprisingly not being tracked by either player, he calls for the ball to be played over the top and behind toward the box.

This is where criticism of Ramos and Pique comes into play. With the latter marking Arjen Robben, Van Persie is being played onside.

Ramos is at fault as well for allowing Van Persie plenty of freedom and the chance to get behind him. He appears to think he’s fast enough to catch up to the striker, but with the Dutchman already behind him and in full stride that’s not going to happen.

With the ball put right where he needed it, it’s all left for Van Persie to slow down time and cement his place in World Cup folklore.

By no stretch is the finish easy, though. Forced to slow his run to meet it at the perfect time, he plants and springs himself at the ball like he is jumping off a diving board into a pool.

With the ball too far out for Casillas to make a play on it, the goalkeeper backtracks not thinking that Van Persie will do what he is about to do. Unfortunately for him, Van Persie does it.

Now, Blind’s role in these proceedings should not be undervalued. A no-risk kind of pass, the worst that would have happened was he over or under hits it and the play resets.

Nevertheless, the then-Ajax man has to give it a try, and with the huge gap in between the back four and Casillas, there is at least some room for error.

The ball finds Van Persie right around 16 yards from goal and it is up to the striker to do the rest. It all happens in a flash and no hesitation on Blind’s part is crucial.

As time goes on and more World Cups capture our imaginations, astonishing goals can get lost in history. That is when it is important to take a moment and recollect on those that remind us why we love football.

It isn’t because of the huge transfer fees or the shots that end up in row Z, but for the impossible goals which we are still talking about to this day.