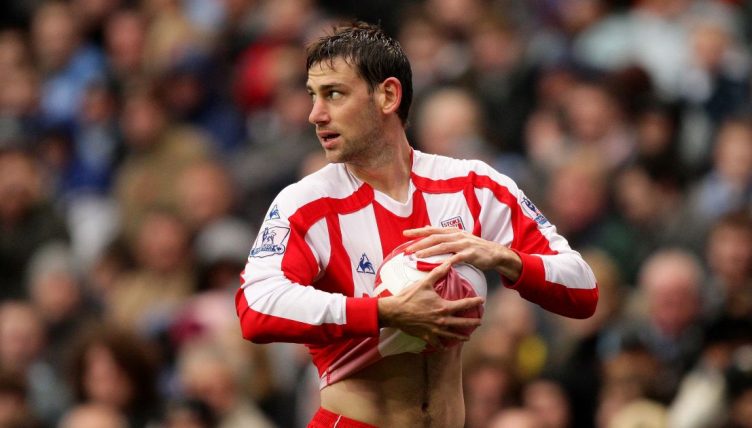 It’s late 2008, and in school playgrounds hundreds of miles from Stoke-on-Trent, an age-old debate has been settled.

In the unrefereed lunchtime kickabout, participants have, for some time, been discussing whether to enforce certain laws of the game.

The offside rule is clearly unusable, despite the ubiquity of goalhangers. There can be no accurate call without a linesman, so the game is played in a simplified format, favouring extremely deep-lying sweepers and extremely advanced strikers.

More contentious is the back-pass rule. While the law should, in principle, be easy to self-police, goalkeepers will — for reasons never explained — continue to scoop the ball up as they please.

It’s not quite anarchy, but in these playgrounds, nobody is winning an indirect free kick two yards from goal.

And then there’s the issue of boundaries. Working with the faintest echoes of white paint, or perhaps none at all, players are forced to address the serious issue of pitch dimensions.

As the lanky ‘winger’ with the terrible first touch carries the ball several fields over, through the sixth-formers, through the year 9s, through the smokers, through the picnickers, the pitch is stretched wider than it is long, which raises the question: without lines, and with other games being played all around, should the participants enforce throw-ins?

Stoke City in the Premier League

It seems like a distant memory now, but the newly-promoted Stoke City of the 2008-09 season was, for those going through their playground years at least, a lot of fun.

With Tony Pulis at the helm, Stoke invented a whole new brand of shithousery, somehow bigger, tougher and a little bit smarter than even the most physical Premier League sides before them.

In a 2-1 home win over Arsenal, one of Stoke’s most impressive scalps of the 2008-09 season, both Stoke goals came from Delap throws.

The first, a direct assist, was met with a neat Ricardo Fuller header. The second was one of the most visually satisfying goals of all time.

The incomprehensibly long throw found a flying Ryan Shawcross, whose flick-on reached Seyi Olofinjana at the back post.

Olofinjana chested the ball into the ground, fell onto it, and headed (faced? necked?) the ball under an approaching Manuel Almunia, whose mid-air attempt to close his legs only added to the magnificence of the goal.

Anyone beaten by these methods tended to react extremely badly – Arsene Wenger at one point called for throw-ins to be replaced by kick-ins – but, at least to those not on the wrong end of it, there was unconventional beauty in this football.

Helping matters along were the Stoke fans, who quickly became the League’s Loudest™ with average volumes of 101.8 decibels, or “just below the threshold of pain” according to sound expert Julian Treasure.

Those volumes weren’t exactly comprehensible on Match of the Day, but Delap certainly was, his two-armed, towel-dried beauties adding newfound meaning to throw-ins, inspiring copycats on many a school playing field.

Stoke finished 12th, a massive overachievement for the promoted club, but a terrible result for Paddy Power, which had bizarrely paid out on the club’s relegation after the first game of the season.

“We’ve got egg on our face and been caught with our pants down,” the bookmaker later admitted. “We cocked up.”

Back to the Championship

There’s a neatness and symmetry to Stoke’s stay in the top flight. Ten years in total, five with Pulis, five without.

The club’s eroding reputation is harder to chart.

While many enjoyed the Delap days and Stoke’s oddly satisfying take on route one, those lovable rogues with villain-ish tendencies eventually became in many people’s eyes, well, villains.

A move towards more attacking football following Pulis’ departure should have helped, but in his place came the fundamentally unlikeable Mark Hughes, which definitely didn’t.

There was a brief period when the old and the new blended together perfectly – in 2014-15, Stoke finished with their highest ever goals for tally and joint-lowest goals against tally in the middle of three successive ninth-placed finishes – but no sooner did Hughes find the balance that he tipped the scales too far in the opposite direction.

The high point came in December 2015 when Stoke played both Manchester clubs off the park before winning 4-3 at Everton, leading to the Stokealona tag.

On the run ✅
Weak foot ✅
Lob 'keeper ✅#GoalOfTheDay is all about Xherdan Shaqiri 👏 pic.twitter.com/XBU8XjsQGF

The following month, Hughes broke the club’s transfer record to sign Giannelli Imbula and things were never the same again.

Still, we’ll always have that brief period when Stoke’s simple football was truly a breath of fresh air — a time when kids around the country might not have been able to find Stoke on a map but would have gladly used their hoodies to mop the dew from a tatty old Mitre in preparation for a hopeful chuck into the box.