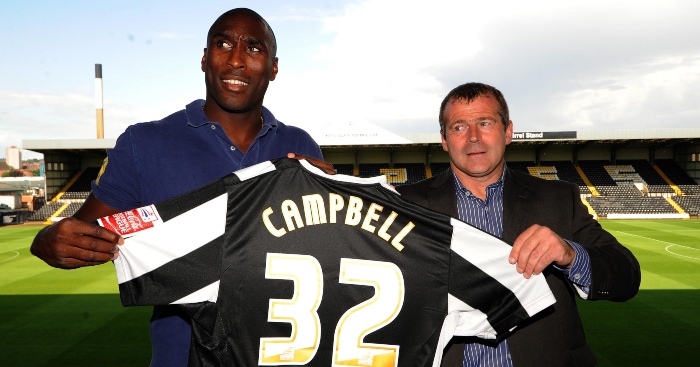 These days most top footballers finish their careers with one last big payday in America or China – but in 2009 Sol Campbell took a slightly different route.

After leaving Portsmouth at the end of 2008-09, Campbell rejected offers from several Premier League clubs, but nobody could have predicted his next move.

In June 2009, Middle Eastern consortium Munto Finance completed a multi-million pound takeover of Notts County and announced their ambition to lead the club to the Premier League in just a matter of years.

They stunned the world by unveiling former England manager Sven Goran Eriksson as their director of football and were soon linked with a host of famous internationals, including David Beckham, Luís Figo and Roberto Carlos. Yes, you read that correctly.

Overnight, the League Two side had become the Galacticos of the English fourth division.

And in August, County made a real statement of intent with their first (and last) high-profile signing in the shape of ex-England defender Sol Campbell.

The deal was a remarkable coup: just three years earlier, the 34-year-old was playing at the World Cup and had scored in the Champions League final.

Campbell signed a lucrative four-year deal at Meadow Lane, with the option of a fifth year, and was reportedly set to earn £10million over the course of the contract.

His £40,000 a week salary was more than any other player in League Two received in a year.

Speaking at his unveiling, Campbell insisted the move wasn’t about money, citing the romance behind what the new owners were trying to achieve as his motivation to join.

“I am confident that something special is being created at the club which will yield a club and a team able to match the ambitions of the new owners, management and proud fans,” he said.

“It’s a challenge, but I think everyone connected with the club is prepared for that. And what a fantastic dream to have to keep winning promotions and get Notts County back into the Premier League.

“I want to be a part of that and I am genuinely excited by what the club is trying to achieve. I have been guaranteed that the club is going to move forward and I believe that all the people behind this, from the manager to the hierarchy, will make that an achievable aim.”

At that stage, fans were riding a wave of unrivalled optimism. Season ticket sales soared, while fans flooded the club shop to get a ‘Campbell 32’ shirt. Even the manager jumped on board the bandwagon.

“He’s a great player and a great organiser, and his experience will be invaluable to our push for promotion this season,” Ian McParland said.

Fans would have to wait to see Campbell in action as he built up his fitness, but County had a promising start to the season without him, winning their first two games 5-0 and 4-0.

They were coming off a 5-2 win at Morecambe when Campbell made his much-anticipated debut on September 19 away against Morecambe, but it proved to be a brutal reality check. 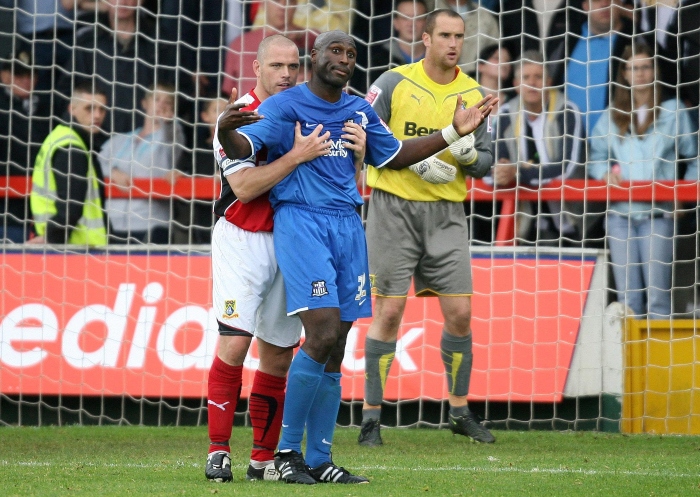 After all, this was a player who had spent the entirety of his career in the Premier League and was accustomed to some of the world’s best stadiums.

The ageing and rundown surroundings of Christie Park were a world away from the facilities at the Emirates or Wembley.

A 34-year-old Campbell was still struggling for fitness and appeared rusty and lost in the muck and mire of Christie Park.

Morecambe’s aggressive and direct style of play also seemed to be an eye-opening experience for the defender as County conceded two goals from set-pieces in a 2-1 defeat.

Campbell had endured a torrid afternoon, but fans thought that surely things could only get better.

However, that appearance would prove to be the first and last time that Campbell was seen in a Notts County shirt.

The defeat seemingly brought home the reality of the situation for Campbell, and he had quickly become disillusioned with life in League Two.

He was reportedly unimpressed with the facilities at the training ground and also claimed that the pitch was not too hard as it wasn’t watered properly.

Notts County gave their star a day off to consider his options, but he’d ran out patience and had clearly already made his mind up.

Just a few days after his first appearance for the club, Campbell quit and walked out on the club after training on the Tuesday.

On this day in 2009, Sol Campbell left Notts County, having his contract terminated by mutual consent after playing just one game. pic.twitter.com/jxidQd9GM4

“He quickly realised after two weeks that it wasn’t for him. We trained one day and came back to the stadium and next thing, everything – his boots – were gone. We never saw him again,” former County defender Brendan Maloney told Balls.ie.

The club agreed to cancel his registration, although some figures at the club were bewildered by Campbell’s decision.

“We are disappointed Sol felt he could not adjust to the long-term nature of the project,” said County’s executive chairman, Peter Trembling.

“Perhaps things are not happening as quickly as he thought they might, but this is a five-year project, not a five-week project. We can’t just become a Premier League club overnight.

“Sometimes decisions are made, people make wrong decisions and Sol has decided that this is not where he wants to be now.”

However, Campbell insisted that the new owners hadn’t kept some of their promises, and he had been led to believe that a host of world stars would join the project

“I knew I would be the club’s first big signing but was told I would be the first of many. Names like Roberto Carlos and Benjani were mentioned. But nothing materialised,” he said to the News of the World.

“The only thing I’m guilty of is taking people at their word so I’m not embarrassed, not hurt or humbled or anything like that – I am just disappointed.

“I bought into a dream and I wanted to make that dream a reality. But it took me less than a month to realise that it was all heading to a different conclusion.”

Just a few months later Campbell returned to his home comforts, back in the Premier League with Arsenal.

As for County, they were promoted as champions that season, but it emerged that Munto Finance lied about having the backing of Middle Eastern investors and they plunged the club to the brink of bankruptcy.

Campbell’s stay in the Midlands was so short that you could be forgiven for forgetting it ever happened.

But while most reflections on his career will focus on his brave crossing of the North London divide or his success with Arsenal, County fans will always remember his brief detour and four-week dalliance with the oldest club in the Football League, albeit for all the wrong reasons.