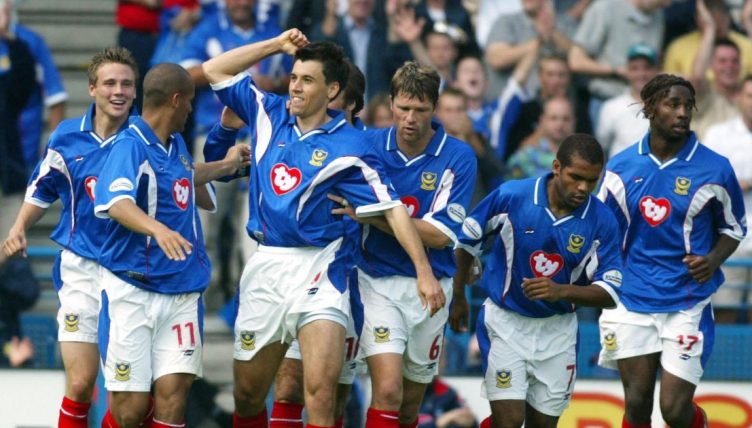 Svetoslav Todorov only had one truly great season for Portsmouth – but what a season.

The Portsmouth team that Harry Redknapp led to the Premier League in 2003 was a curious beast.

The club had been struggling at the wrong end of the First Division for several years before Redknapp took over –  under a succession of weird and wonderful managers since Milan Mandaric had bought the club in 1998, veering from one approach to another with little success.

But where others failed, Redknapp delivered spectacularly. He found a kindred spirit in Mandaric, an owner willing to indulge his love of transfer deals.

A formidable, title-winning side was constructed out of a bizarre array of components. Plenty of old heads, a handful of promising youngsters and unheard of loanees pitched up at Fratton Park. Little was paid out in transfer fees, but the wage budget ballooned.

Almost a squad’s worth of players arrived. Some, like Hayden Foxe and Shaka Hislop, had worked with Redknapp before at West Ham. Steve Stone, Tim Sherwood and Gianluca Festa bolstered the team with a core of Premier League experience.

Paul Merson was the token maverick. Already portly, slow and wheezing, visibly diminished by the effects of a deeply unhealthy lifestyle, he was still a cut above, pulling the strings with consummate ease. 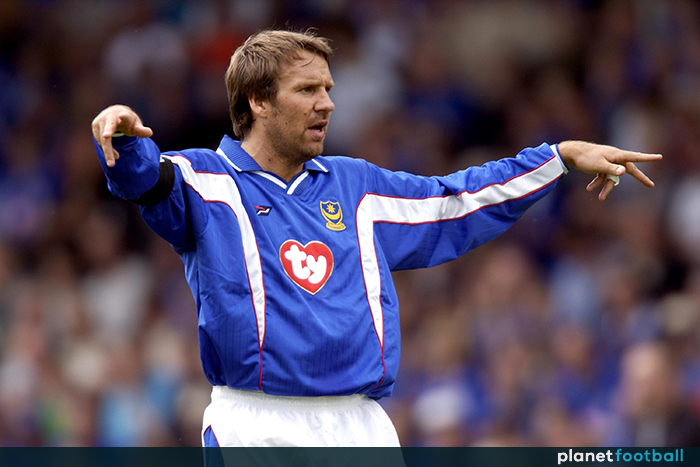 Initially Director of Football at Fratton Park, Redknapp was parachuted in as manager in March 2002 when Graham Rix was sacked, with relegation a concern. They eventually finished in 17th despite taking just two points from the final five games of the season.

After weighing up the merits of the squad he inherited, Redknapp set about completely dismantling it. Wholesale changes, on the back of a year of struggle, aren’t normally the foundation for a title challenge, but this time everything meshed together beautifully.

Portsmouth won eight of their first nine games, sweeping aside far more established teams. And Svetoslav Todorov, a much-maligned figure after arriving from West Ham at the end of the previous season, became the unexpected and unstoppable focal point.

Redknapp had previously signed the striker for West Ham from Litex Lovech in Bulgaria, but he scored just once in 14 league appearances for the Hammers and seemed to be another obscure gamble that hadn’t paid off.

When he was sent off for violent conduct in only his second appearance for Pompey and then played only once more before the end of the season, it looked safe to say Todorov could be filed alongside Marco Boogers, Ilie Dumitrescu, Florin Raducioiu and co.

It took him until the fourth game of the new season to get off the mark, but after scoring a half-volley in a 3-0 win over Watford, the floodgates opened.

Clever movement was Todorov’s hallmark. So often he finished chances with one touch, arriving in the box at just the right moment to steer in a cross or glance home a header. He racked up tap-ins from a few yards out like nobody’s business.

With the artistry of Merson through the middle and a barrage of crosses coming from out wide, Todorov thrived on the service he received. Once Portsmouth hit top spot they never really looked like surrendering it.

Todorov scored 26 league goals in total, obliterating his previous best of 19 at Litex. All but one were scored from inside the area. Many were scrappy or instinctive close-range finishes, but he also engineered space for a shot well and was composed in one-on-one situations.

Having lost to Sheffield Wednesday three days earlier, Portsmouth were once more making life difficult for themselves until, on a night of frayed nerves, the striker notched a second-half winner against Burnley before launching himself into the crowd to celebrate.

💙 One of the most iconic celebrations of all time

😍 17 years ago today, @todorov_9 launched himself into the Fratton End as #Pompey sealed promotion pic.twitter.com/PmKEYrg91Z

He found the net six times in the final three games of the season, including a hat-trick in a 5-0 demolition of Bradford City on the last day, to take him ahead of Nottingham Forest’s David Johnson as the First Division’s top scorer.

Portsmouth had played some wonderfully buccaneering football and claimed the title with 98 points and 97 goals. They had three players named in the PFA Team of the Year – Hislop, Merson and Matty Taylor – but Todorov surprisingly missed out.

Returning to the top flight for the first time since 1988, the squad was set to change dramatically. Portsmouth couldn’t afford to stand still, and Redknapp recruited Yakubu and Teddy Sheringham to increase his side’s firepower.

However, Todorov signed a three-year contract as reward for his efforts and would surely have kept his place if it wasn’t for a desperately unfortunate injury.

During a training game, the striker caught his studs in the ground and ended up damaging his cruciate ligament. He was ruled out for the entire season after undergoing an operation with knee specialists in America and had to watch on as Portsmouth adapted well to the Premier League.

Playing in Todorov’s absence, Sheringham scored four times in his first three games and was named Player of the Month for August. Yakubu later usurped him in the goalscoring stakes. 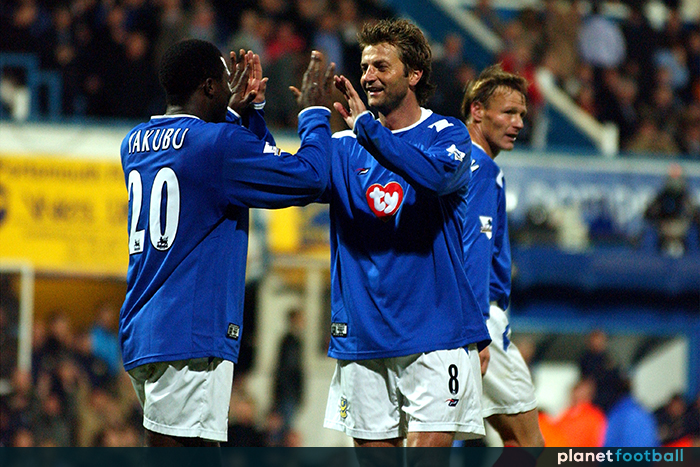 Todorov managed to return sooner than expected, starting away to Liverpool in March, but he required further surgery on the same knee just two months later, which forced him to miss Euro 2004 and the whole of the next season. It was a devastating blow for player, club and country.

But Portsmouth stuck by Todorov despite almost two years out of action, offering him a new deal in August 2005.

The Bulgarian was most often used off the bench as Portsmouth floundered in the bottom three, but he had a telling impact against West Brom in December in what was Harry Redknapp’s second match back in charge after an ill-fated spell at Southampton.

Fittingly, Todorov grabbed the winner. It was a cathartic moment, his first goal for the club since May 2003, and sealed just Portsmouth’s third win of the season.

Fratton Park rose to its feet. Their hero had returned.

And he wasn’t done there either; Todorov scored three more crucial goals in the New Year as a seemingly doomed Pompey rescued themselves from relegation in dramatic circumstances.

No wonder he’s in their Hall of Fame. 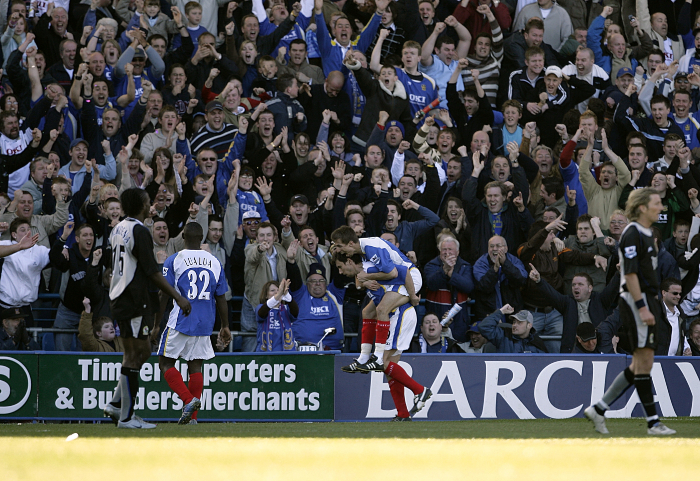 Todorov would score two final goals for the club at the start of the 2006-07 season before being loaned to Wigan. The move didn’t work out and he was released by Portsmouth once his contract expired, joining Charlton on a free transfer.

Still only 28, it promised a fresh start, but he again succumbed to knee injuries, returning home to Bulgaria after two interrupted campaigns at the Valley.

Todorov found a degree of redemption with his former club Litex, winning the Bulgarian Supercup and two league titles. He retired in 2013, at the age of 34, having scored just shy of 100 goals throughout his career.

More than a quarter of them came during Portsmouth’s unforgettable promotion campaign. Last year he was inducted into the club’s Hall of Fame in recognition of the memories he provided. Without injuries, there could have been so many more.