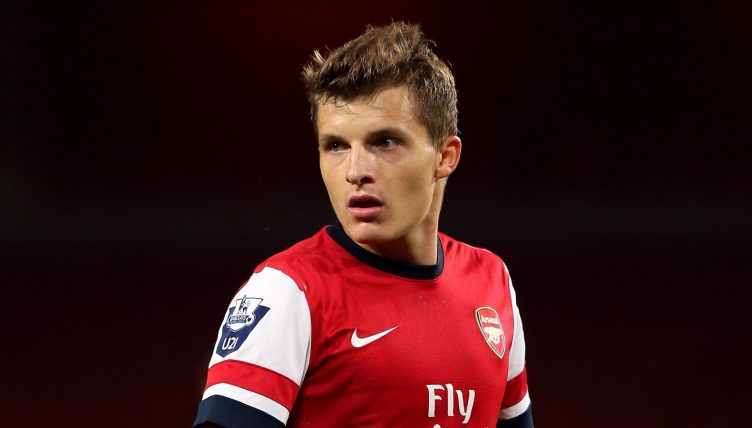 Thomas Eisfeld may not have made the grade at Arsenal, but to categorise him as another one of Arsene Wenger’s inexpensive flops would be wide of the mark.

In fact, for one magical night, Eisfeld wasn’t a flop at all. He was the second coming of Robert Pires. Or something approaching that, at least.

The League Cup has provided many a false dawn for many an Arsenal signing down the years. Park Chu-Young scored his first goal for the club in this competition, Igor Stepanovs impressed on his Arsenal debut in the League Cup and then there was the barrel-chested brilliance of Julio Baptista and his four goals against Liverpool back in 2007.

But Eisfeld’s moment in the spotlight felt different.

The Arsenal team that lined up against West Brom on that cold September night at the Hawthorns in 2013 was the usual mix of squad players and emerging young talent.

Some, like Serge Gnabry, would defy the odds to go on to bigger and better things. Most, however, ended up taking a different path.

Eisfeld didn’t become a fixture at the club either, but the fact he made it this far was impressive to say the least.

A gamble on talent

A promising youngster at Borussia Dortmund, Eisfeld had captained Germany at Under-15 level and looked well on course to follow Mario Gotze’s route from academy star to first-team regular after scoring 11 goals in 23 games for Dortmund’s Under-17s.

But that was before he suffered an anterior cruciate ligament injury, the first of several injuries that robbed Eisfeld of crucial playing time at a pivotal period in his development. The fact that he not only recovered from those setbacks but recovered enough to convince Arsene Wenger to take a gamble on him was nothing short of miraculous.

By the time Arsenal came calling in early 2012, Eisfeld was back to something approaching his best, having scored six goals and laid on six assists in 12 outings for the Dortmund under-19s. Even so, fans would be forgiven for feeling a little uneasy about the prospect of paying £420,000 for an injury-prone youth prospect from the Bundesliga.

After all, just a few years earlier, Wenger had taken what he described as a “gamble on talent” to bring the untested Amaury Bischoff to the club. As gambles go, it had been a bad one.

Eisfeld was different though.

For one thing, it seemed as though Wenger had a clear plan from the off for the midfielder, with Eisfeld immediately joining up with the Under-21 side. “He is young but has proven to us that he can play, that he has the attitude and technical ability to be a valuable addition to our squad,” Wenger said.

Eisfeld was a regular in Arsenal’s reserve ranks, captaining the Under-21 team and racking up 14 goals and nine assists in 40 games played across just over two seasons. There were other signs suggesting he was destined for big things too; Eisfeld joined the first team on two separate pre-season tours of Asia, impressing in both trips with goals and solid all-round performances in several of the warm-up games.

By the time he earned his first start against West Brom in the League Cup, he had already put in one impressive cameo in the competition for the Gunners a season earlier, coming off the bench against Reading to help turn the tide in Arsenal’s favour. Four-nil down at half-time, Arsenal rallied to win 7-5 after extra time, with Eisfeld’s inventive range of passing on the night one of the big talking points to come out of the game.

A year later, Eisfeld was at it again, this time showcasing another facet to his game.

Wenger had brought the midfielder into the League Cup clash with West Brom off the back of his impressive scoring form for the Under-21s. Eisfeld was scoring goals from all angles, with the German displaying a knack for ghosting into the box at the perfect moment before applying the finishing touch to an attacking move.

Now it was time to put him to the test in the first team against a Baggies side that, while much-changed, boasted plenty of experience, save for the inclusion of their own rising star at the time, Saido Berahino.

Bite you to death

Just after the hour mark, Eisfeld’s moment arrived. Gnabry started the move, playing the ball into Nicklas Bendtner, who delivered a precise pass into the box for Eisfeld to run on to. Bendtner’s pass was exquisite, cutting the West Brom defence apart, but it still required a cool head.

Having timed his run to perfection, Eisfeld took one touch to steady himself before sending goalkeeper Luke Daniels the wrong way to score with aplomb. It was a nerveless finish that belied his youth and inexperience, but Eisfeld could do little to contain himself when it came to celebrating the goal, wildly pumping his fists in the direction of the nearby Arsenal fans.

Almost all of his team-mates came to congratulate him, recognising the goal as one that could signal the start of something special.

With eight minutes to go and the scores locked at 1-1 following a Berahino goal, Eisfeld made way for Akpom with Arsenal chasing a late winner. He enjoyed a fine reception from the visiting Arsenal fans upon his departure, many of whom must have been content that he was a world away from the likes of Bischoff.

Wenger, for his part, spoke glowingly of Eisfeld’s performance and future in the team, making the ill-fated comparison with a former Arsenal great in a remark that must have had fans purring. “He is a Pires type,” he said. “He appears to be in the box without being noisy and appearing suddenly. When he is there, he finishes well.

“He has that kind of quality that some midfielders have – not many. They have the timing to get in dangerous situations. When they have those dangerous situations, they are like snakes. They bite you to death because they don’t miss their first touch. He’s cool enough in front of goal and he finishes well.”

As endorsements go, this was blockbuster stuff. “He is a Pires type” is the kind of quote that might have adorned a Michael Owen-style DVD showcasing his talents to a prospective club.

Unfortunately, it didn’t translate into an extended run in the team. Or any run, for that matter.

Eisfeld’s next involvement in the first-team came later that season, with the German serving as an unused substitute in Arsenal’s FA Cup semi-final penalty shoot win over Wigan. To put that into some sort of perspective, the perma-crocked Kim Kallstrom featured that day.

Eisfeld might have been content to stay at Arsenal beyond that summer had he not been approached by Felix Magath. Magath was in charge at Fulham at the time, having just overseen the Cottagers’ disastrous relegation from the Premier League. He had, however, been given the backing of owner Shahid Khan to guide the London club back to the top flight at the first attempt – and he wanted Eisfeld.

Already 21 and with no clear route into the Arsenal first-team squad let alone the starting XI, Eisfeld was seduced by the opportunity to work under Magath, a legendary player and Bundesliga-winning coach in Eisfeld’s homeland. Magath, for his part, chipped away at Eisfeld’s resolve to stay at Arsenal with the promise of regular first-team football. The midfielder relented, eventually agreeing to join.

What was supposed to be the start of an exciting new chapter in his career, however, soon turned into a nightmare when Magath was sacked after seven Championship games without a win. In the aftermath, Eisfeld emerged as something of a scapegoat, banished to the Under-21s and told to begin looking for another club. Unceremonious doesn’t begin to do it justice.

“I’d had a good time at Arsenal and I was a good prospect, so it was difficult,” Eisfeld told iNews in 2018.

“Nobody talked to me and, I mean, if a club pays £1.5million for you and you have good talks with the club and the manager before and he says, ‘If you want to play, if you want to get first-team football, come here,’ then he leaves, a new manager comes in and sends you to the Under-21s, it is always difficult.”

Just over six months on from his Fulham move, Eisfeld took the difficult decision to leave England behind for a loan move to German second-tier outfit Bochum. It may not have been the destiny Eisfeld was dreaming of the night he scored at the Hawthorns, but it was one that ensured the midfielder has played regular first-team football ever since, albeit knee injuries have continued to blight his career.

Given the obstacles he had overcome to play for Arsenal and the sudden, dramatic way his football dreams had come crashing down around him, Eisfeld would be forgiven for feeling just a tiny bit bitter. But he doesn’t.

“Arsenal had great players at the time – we had [Tomas] Rosicky, [Jack] Wilshere, [Aaron] Ramsey – and it was really tough to get much playing time. But I think I had a good relationship with the manager, with the players and I had a great time there.

“It [Arsenal] improved me technically, definitely, 100 per cent. Then under Magath, it was lots of physical work and stuff like that so I had both sides of the game – at Arsenal the football side and then at Fulham under Magath the physical side.”