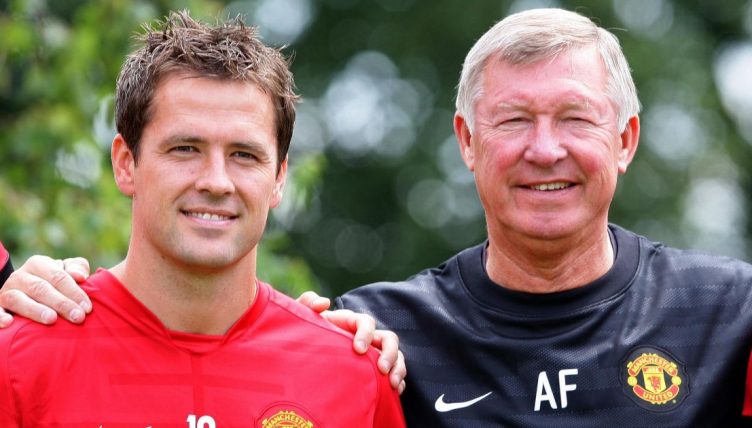 In 2009, Michael Owen’s management put together a 32-page presentation about their client in order to find him a new club. It was strange.

Charismatic. Stylish. Cool. Clean & Fresh. Those are just four of the 21 key terms used by Wasserman Media Group to describe Michael Owen in the year 2009.

The praise was not given offhand but was part of a calculated attempt to find a new club for the English striker, then 29, who was seeking an exit from relegated Newcastle.

In order to get the word out on Owen’s availability, Wasserman made a 32-page dossier of facts and figures about their client, distributing it to potential suitors.

It made for strange reading. One page was simply a list of adjectives, few of which — with the possible exception of ‘Clean & Fresh’ — accurately described the former Liverpool and Real Madrid footballer.

Despite the oddities, something worked: shortly after leaving Newcastle, Owen was signed by Manchester United as a replacement (of sorts) for Cristiano Ronaldo.

Now, over a decade later, the brochure remains a fascinating portrayal of an ‘Athlete, Ambassador and Icon’ at a crossroads in his career.

The dossier begins with biographical information about Owen that is factual and uncontroversial. As is the subsequent medical review by physiotherapist John Green… up to a point. 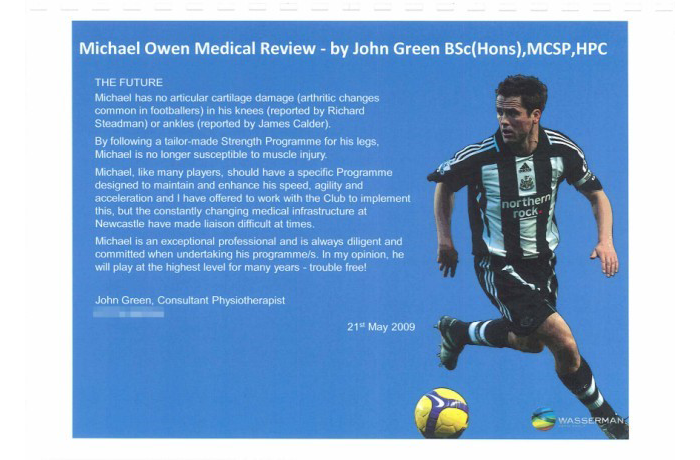 Four pages are given to the expert talking about Owen’s legs — four pages on which myths are debunked and doubters set straight.

“The following are my thoughts on Michael Owen’s so-called ‘injury prone’ status — a statement I consider to be a nonsense!” Green yells.

“His medical issues have more to do with questionable advice, rather than him being an individual susceptible to injury!”

In an attempt to forecast Owen’s future, Green — whose clients also include Miranda Hart and Kit Harington — then uses three sober paragraphs to explain how the striker can avoid injury as long as he follows a particular training regime.

By the end of them, you’ve forgotten those exclamation marks and feel like you really should sign Michael Owen.

The fourth paragraph, however, makes the whole thing a lot less convincing.

“Michael is an exceptional professional and is always diligent and committed when undertaking his programmes,” Green says. “In my opinion, he will play at the highest level for many years — trouble free!”

He! Might! Even! Score! A! Low-key! Hat-trick! Against! Wolfsburg! Some! Day!

If there’s one telling sign of doubt and insecurity amongst the bar charts and headshots, it’s John Green’s wild use of exclamation marks. That is not the punctuation of somebody who truly believes what they are saying.

Saying that, I once had a bit of time to kill and, as you do, ended up John Green’s website. It hit me that some of his patient testimonials looked familiar.

“I first visited John Green with a great deal of fear and trepidation and very low in confidence!” says the very real Steven Patient.

“At the end of my first session, my spirits had been lifted with his unique style of making people feel at ease with any situation!

“From 2005 to 2008 I visited John Green on numerous occasions, where my rehabilitation programme was stepped-up at exactly the right levels for me and was given so much moral support — far and beyond anything you could expect or imagine!”

And then there are those odd descriptors, all 21 of them, designed to show that Owen “scores in a wide range of categories and offers huge commercial benefits to whoever he plays for.”

Maybe it’s my lack of business experience speaking, but I just cannot fathom the purpose of this mood board accompanied by half of Michael Owen’s face. 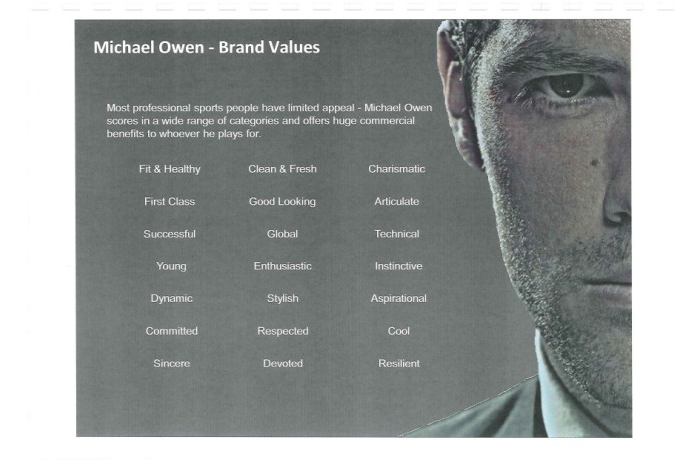 One big problem is that you obviously can’t be ‘Sincere’ and ‘Cool’ at the same time, nor can you be both ‘Charismatic’ and ‘Technical’ — whatever that might mean.

And why does ‘Clean & Fresh’ become a single category? Is it because the writer thinks cleanliness and freshness to be insufficient attributes on their own? Hey Wasserman, they still look utterly, utterly weird together.

Fortunately, a better match than ‘Clean and Fresh’ is ‘Michael Owen and helicopters’, and the striker’s controversial flying habits are defended in another chapter with all the guile of peak Claudio Cacapa.

“The truth is that Michael has never once flown from the Stables [in Cheshire] to Newcastle or vice versa,” the brochure reads, soothing your concerns about Owen’s professionalism like aloe vera on a strained thigh.

Helicopters, of course, would end up providing some of the more memorable moments of the forward’s late career.

But it’s the very mention of such myths that makes this brochure a bit of an own goal. Even if Owen isn’t going to fly his chopper to and from your training ground, would you necessarily want to sign a player whose baggage suggests he might?

This is very much a financial-crash-era football presentation because its summary begins: “In these difficult economic times, Michael Owen could be the best value signing of the summer following Newcastle’s relegation from the Premier League.” 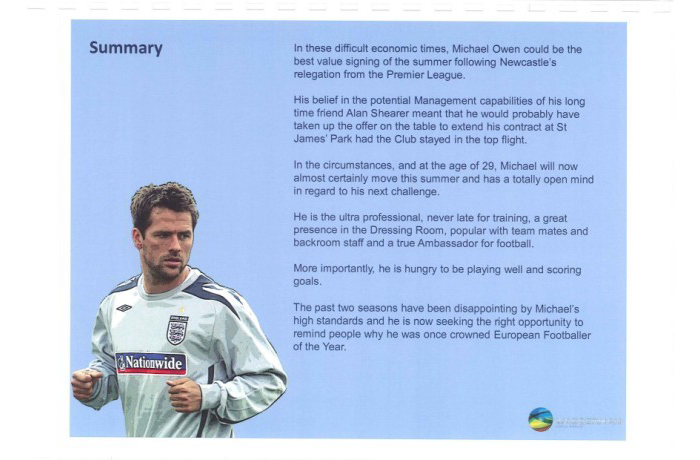 Clearly, Owen’s subsequent three years at Manchester United were unremarkable — 388 days were spent on the treatment table — but it’s fair to say the market wasn’t stuffed with opportunities over the summer of 2009.

Sunderland signing Darren Bent for £10million was a good deal; Manchester City paying £17.5million for Roque Santa Cruz was not.

Owen for free? Sure. Reports at the time suggested he was paid a weekly wage of around £30,000 — less than a third of what he had been earning at Newcastle.

It didn’t really work out, but, er, something about Man City… last minute… ‘priceless’.

Ultimately though, looking back on the Wasserman brochure is as heart-rending as it is amusing.

Reading that a 29-year-old Owen was “desperate to be back in the England squad” and wanting “nothing more than to see his name at the top of the goalscoring charts” can’t help but bring a pang of sadness, because you were probably desperate for those things too.

At least he’ll always be Cool.

READ NEXT: 17 brilliantly banal Michael Owen quotes when he’s not selling a book

TRY A QUIZ: Can you name Liverpool’s top 30 goalscorers of the Premier League era?