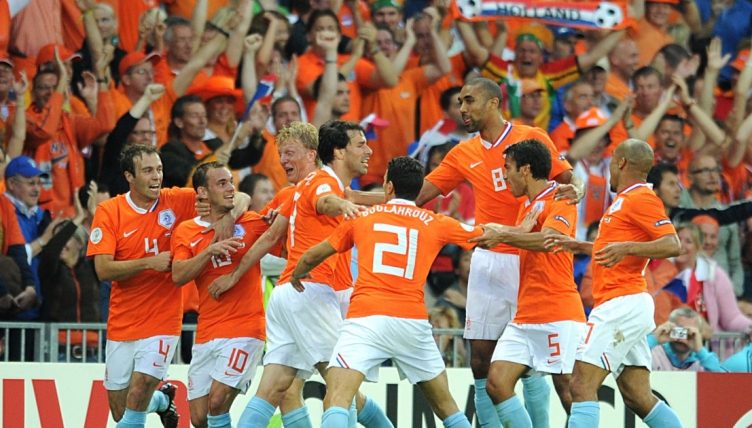 Usually, when Thierry Henry was on his knees on a football pitch, it was to celebrate.

One of the most iconic photos of Henry is the Frenchman sliding in front of euphoric Arsenal fans after his stunner of a goal in the north London Derby in 2002.

On one occasion, however, it was despair rather than delirium that brought him to his knees. Why? Because of one stunning Netherlands side.

Heading into Euro 2008, the Netherlands were widely expected to fall at the first hurdle. After all, they were drawn against the finalists from the World Cup two years prior, Italy and France, in the most formidable of Groups of Death.

While France and Italy had excelled in Germany in 2006, the Dutch went out in the round of sixteen after losing, and bruising, in the infamous Battle of Nuremberg to Portugal.

Two years on, though, Marco van Basten’s team was much stronger. Edwin van der Sar and Ruud van Nistelrooy were in top form, while the likes of Arjen Robben, Wesley Sneijder, Rafael van der Vaart and Robin van Persie were more experienced and all the better for it.

Even so, not even the most optimistic of Dutch fans would have expected what happened next.

First up were World Champions, Italy. After he missed an early chance, Van Nistelrooy made amends by tapping in from a position that, by today’s standards, looked miles offside but wasn’t, as defender Christian Panucci was lying injured behind the byline.

Van Basten’s boys were ahead and doubled their lead just five minutes later with an absolute beauty of a goal. From an Italian corner, Giovanni van Bronckhorst saved a certain goal by making a goal-line clearance and immediately charged up to the other end of the pitch.

Van der Vaart saw the left-back in acres of space and found him with a pass. Sending a long ball to the back post, Dirk Kuyt was on hand to head the ball across for Wesley Sneijder to volley it past Gianluigi Buffon.

Fittingly, Sneijder ran over to celebrate with his manager. To call his effort as good as his boss’ volley from 20 years prior would be *a bit* hyperbolic, but it was at least good enough to be mentioned in the same breath, and that’s no mean feat.

Being 2-0 down, the Italians had no choice but to throw caution to the wind, bringing on Alessandro Del Piero at half-time to play alongside Luca Toni and form a quite frankly filthy forward line.

But Italy just couldn’t find a way through what was, on paper, a rather shoddy Dutch defence, thanks largely to the efforts of Van der Sar.

His best save came in the 78th minute when he somehow kept out a vintage Andrea Pirlo free-kick, and while the AC Milan midfielder was still wondering how on earth he hadn’t scored, Van Bronckhorst was setting off on another one of his adventures.

He found himself through on goal and squared for Kuyt. The Liverpool man had his effort saved by Buffon but got the ball back and crossed for Van Bronckhorst to head in and make it three. That was that. Job done, and done in style.

The performance alone would’ve been enough to have France quaking in their boots. But to make matters worse, Van Persie had only played the final few minutes and Robben hadn’t played at all. Just how much damage could this side do with them on the pitch? In short, lots.

It was a mild Friday night in Berne, and, having drawn their first match 0-0 with Romania, France knew they couldn’t really afford to lose their second.

Given that, their priority would have been to avoid going behind early and having to chase the game, especially considering how lethal their opponents had shown themselves to be on the counter-attack against Italy.

Ten minutes in, they were behind.

Kuyt headed in from a corner after escaping the attention of Florent Malouda. Why on earth was he on man-marking duties, you ask? Je ne sais pas. Raymond Domenech’s men now had to respond, and to their credit, they did, looking the better team for the rest of the first half, keeping Van der Sar busy.

Given that, logic would dictate that Van Basten should sacrifice one of his front four for a more defensive-minded player at half-time to shore things up, but where would be the fun in that? Instead, he took off Orlando Engelaar, one of the two holding midfielders, and brought on Robben.

His side were under even more pressure at the start of the second half, with Henry missing two big chances. At this point, Marco surely started thinking about shutting up shop, right? Nah, fuck that. Instead, he took off Kuyt, a man renowned for his defensive contribution, and brought on Van Persie.

The Dutch now had an absolutely world-class five-a-side team – Van der Vaart, Sneijder, Van Persie, Robben, Van Nistelrooy – in front of their defence and Nigel de Jong. They made their poor opponents look like a bunch of hungover Sunday leaguers.

Been watching highlights from Euro 2008. The Netherlands scoring some absolutely beauties against France.

Just three minutes after coming on, Van Persie doubled his side’s lead, finishing off a slick move that started with a ridiculously good pirouette from Van Nistelrooy to play Robben in. Who says the former Manchester United man was just a poacher?

The man with whom he fought for the Golden Boot in England for so many years, Henry, then got a goal back with a deft near-post finish to give his nation some hope. That lasted a good 30 seconds.

Straight from kick-off, the ball ended up with Robben inside the box, and from a tight angle, he thumped the ball into the roof of the net. He shrugged, Gregory Coupet fell on his arse and Henry sank to his knees. We don’t blame you, Thierry. 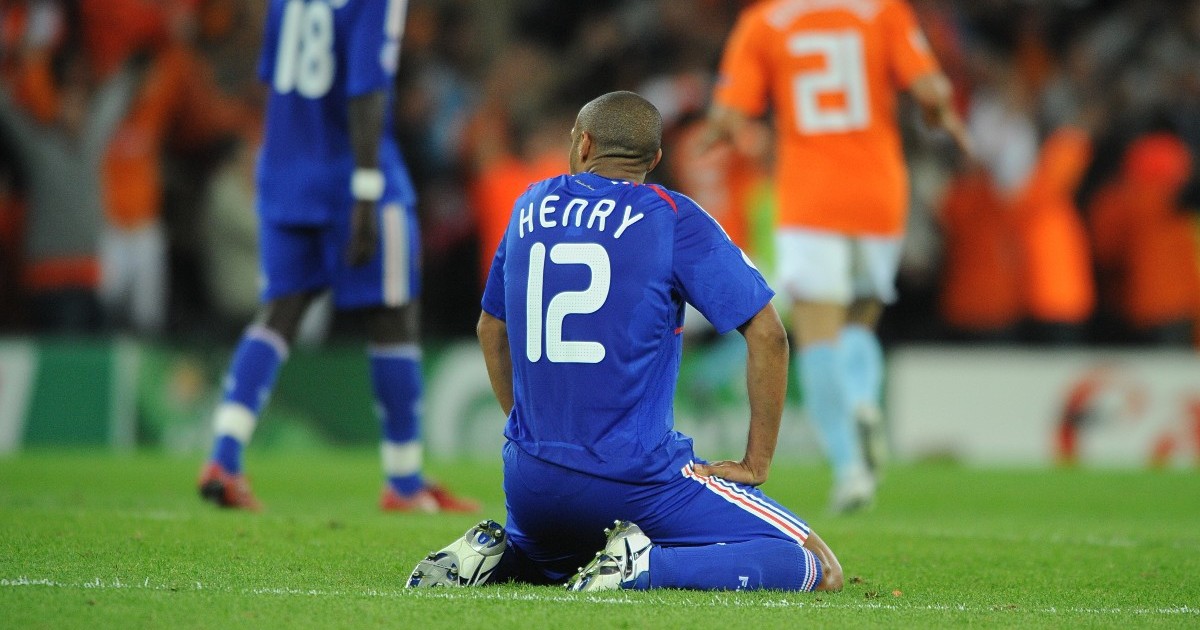 With just 30 seconds to go, Henry and his countrymen were probably just looking forward to the final whistle, but their opponents weren’t finished with them yet

Sneijder picked up the ball on the edge of the box with his back to goal and, rather than run down the clock, turned and fired it into the top corner.

The Netherlands had not only put four goals past one of the best sides in the world, but three of them were absolute stunners.

We all have that mate that, when warned that something he’s doing is risky, will say something along the lines of, “Live fast, die young,” or, “I’m here for a good time, not a long time.” In 2008, that mate was the Netherlands.

After comfortably beating Romania with a rested side in the final game, they drew Russia in the quarter-finals, and things all went wrong.

Over 90 minutes, their opponents were lethal on the counter-attack, had a threat in the form of his life in Andrey Arshavin and had a manager in Guus Hiddink who knew a thing or two about the Dutch. They were only alive and kicking thanks to a late equaliser from Van Nistelrooy.

With his players tiring and Arshavin electric, Van Basten perhaps should have gone for a more conservative approach in extra-time, but as he showed against France, that wasn’t his way.

Arshavin and co bagged two goals in the next 30 minutes, and that was that. The Dutch were out. 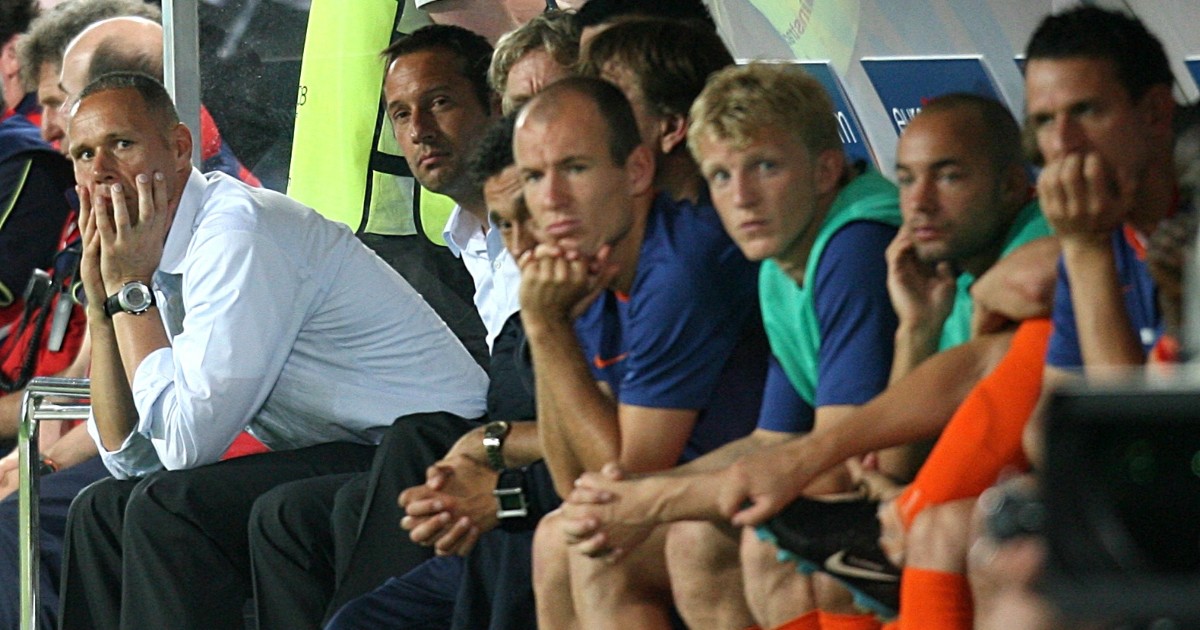 Despite not technically achieving anything at all, Van Basten and the class of 2008 were still widely praised in the aftermath of the tournament, and are remembered fondly throughout their homeland today.

Johan Cruyff once said: “Quality without results is pointless, results without quality is boring.” Striking that balance is something that the Dutch have famously struggled to do.

Their attacking, swashbuckling style of football over the years has been a joy to watch but has also cost them results on multiple occasions. Yet looking at those two beautiful displays in the summer of 2008, it’s hard not to think that, all in all, it’s worth it.