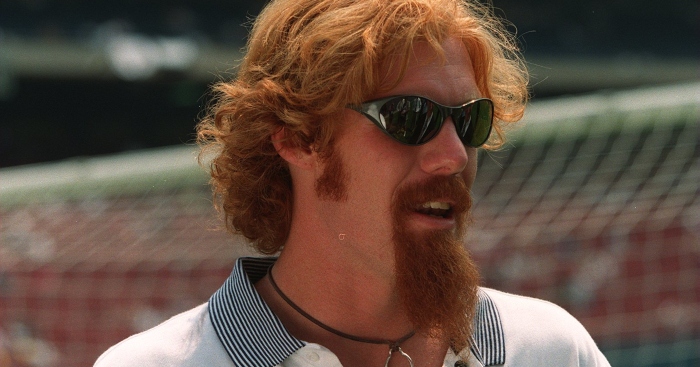 Anyone who remembers the 1994 World Cup will not need reminding of the pure, unadulterated American-ness of it all. Well, the MLS All-Star game of 1996 ran it close.

The early years of MLS were stuck in that no man’s land in between serious league and sports entertainment, combining international stars with a unique penalty shoot-out format designed to avoid tied games.

The first ever All-Star game, held in the summer of 1996, was no different,

The mere existence of an All-Star game might sound like the most American thing possible, but only until you actually see what it looks like. It turns out there’s always a way of turning it up to 11.

There’s no harm in doing things differently, but the sense of spectacle can quickly go from ‘ramping up excitement’ to ‘oh, is this still going’.

That’s exactly what we got when, instead of both teams entering the field of play in unison, the players from the East and West entered one by one. We’re not saying they didn’t rehearse this, but a full five minutes of men jogging out onto a field one at a time might be enough for a few fans to wonder when they were going to see the actual sport.

We do get some nice little easter eggs during this period, though, from Jorge Campos’ introduction as a ‘Goalkeeper/Forward’, wearing a custom-made fluorescent No.9 shirt and goalie gloves, and Brian McBride doing something different with his hair for the first and last time.

The biggest cheer, though? That was for Alexi Lalas, deep into his goat-fallen-into-a-vat-of-curry-chic era. 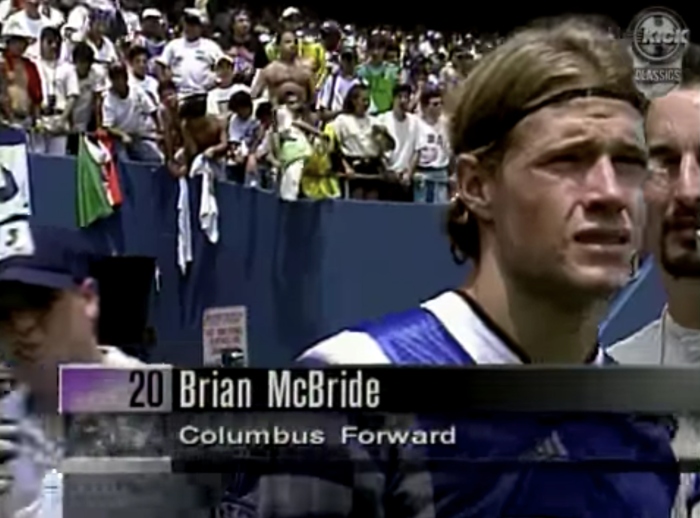 The concept of East v West as an actual game is curious in its own right. It’s something we often discuss on Twitter with regards to a North v South Premier League clash, but the Americans actually made it happen.

Average attendances in the first MLS season were below 20,000, so the spectacle of watching the best of the best lock horns – you know, the sort of thing you get in bigger American sports – probably didn’t appeal to that many.

After the turn of the century, we would see club sides from across the world invited to take part in the showpiece, from Fulham in 2005 to Atletico Madrid in the upcoming 2019 game.

Back in 1996, though, they had another bright idea to get fans through the gates… another game straight afterwards, featuring Brazil against the FIFA All-Stars.

We’re not sure what’s the strangest thing about that game, the fact that Campos went straight back out after playing 45 minutes for MLS West, or that Kazuyoshi Miura – replaced by George Weah that day – is still playing in 2022. Yeah, it’s that, isn’t it? 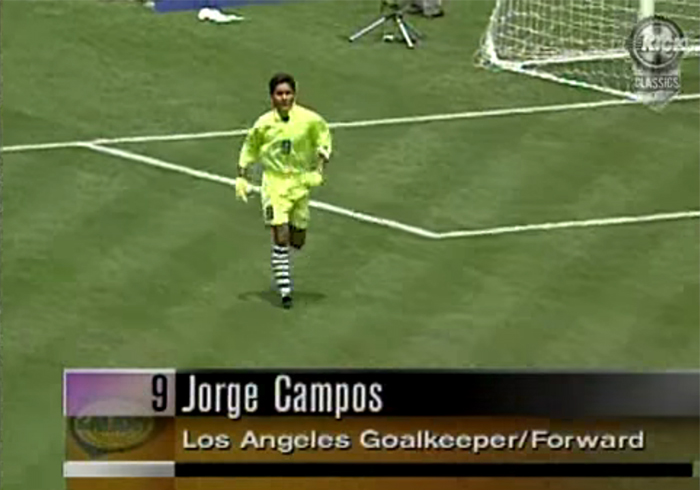 When the first goal arrived, it was, against all odds, legitimately great.

Carlos Valderrama scooped the ball out to Tab Ramos, who brought it down and blasted a shot into the far corner with such velocity that you expected it to trigger a cannon blasting red, white and blue confetti onto the field of play.

There’s even a prototype of Cristiano Ronaldo’s trademark celebration as the American international jumps and turns before being embraced by Roy Lassiter.

Great as it was, though, there’s nothing more ‘The United States in 1996’ than the first goal in the biggest game in town being scored by a guy who shared his name with a discontinued clear soda.

Hang on *fiddles with earpiece* we’re just being told the other team had a guy named ‘Digital’ playing for them. We take it all back.

As we approach half-time, we get a sentence that simply could not exist outside that particular MLS moment.

Eric ‘Waldo’ Wynalda finds space inside the box and flashes a shot well off-target, bringing cries of “There’s Waldo, but where’s the net?”.

On reflection, it’s easy to see why the Ray Hudson style of commentary remains popular with American audiences.

Meanwhile the ‘Not Soccer Aid but not not Soccer Aid’ brief managed to play itself out with no fewer than three substitutions before half-time, including the withdrawal of goalkeeper Tony Meola with just a minute to play before the break. Anyone after advice on time-wasting ought to take note.

By this point the West had turned things around, with one of their goals coming from indoor soccer superstar Preki with a curler which we’d like to point out would have missed the target in an indoor game.

Another element that some might welcome in Europe is the countdown clock, which has the dual purpose of ramping up tension in a game like this and reminding you during duller encounters just how much more of a game you have to sit through.

On this occasion, we knew just two minutes remained when Steve Pittman – a half-time sub for the wonderfully-named Cle Kooiman – raced through from the back to win it for the Eastern Conference.

Yes, it was a dramatic end to the game, but it also reminded us of just how close we were to those 35-yard penalties, so who’s to say if it was good or not.

In fact, come to think of it, how would that have worked with the second match scheduled in to follow? Would they have just waited for the All-Star game to finish, or held back the spot-kicks as a way to trick the 70,000+ crowd into sticking around for another two hours? Would they have just called it a tie?

Brazil won the late game 2-1, by the way, with Roberto Carlos – in the summer he moved to Real Madrid – scoring in yellow for only the second time.

If TV schedulers were looking at the inaugural All-Star Game, they’ll have noticed that people like goals, and the 1997 edition couldn’t have been better if it was scripted.

A 5-4 win for the East, with all of their goals coming after the break, saw them go two for two, while the next three East v West ties would bring a combined 35 goals. No, that’s not a typo.

All in all, though, the 1996 game was a perfect introduction to an estimation of elite football. We had confusing decisions, disappointment, and a result that didn’t really matter anyway.

Oh, and there were guys in oversized sombreros, because of course there were.