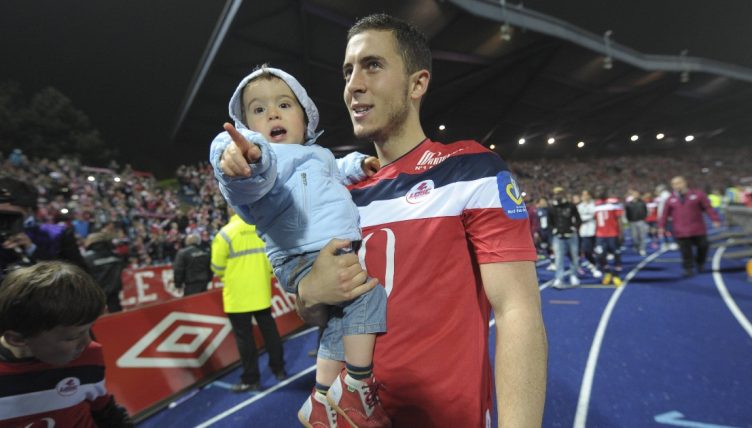 When the time came for Eden Hazard to wave goodbye to Lille, his club legend status had long been secured. Needless to say, he wasn’t going out with a whimper.

Hazard had already been a standout player in Lille’s stunning 2010-11 Ligue 1 triumph, the club’s first league title in over 50 years, while his star shone even brighter the following year, finishing as their top scorer with a career-best 22 goals.

Twenty of those goals came in the league, with a further 16 assists. Obscene numbers beyond what even Neymar is reaching in the French top-flight today.

It was obvious that the Belgium international’s talent belonged at one of Europe’s elite clubs. Sure enough, at the end of the season, he abruptly ended years of protracted tabloid speculation and announced on Twitter that he was joining the champions of Europe, Chelsea.

But while Roberto Di Matteo’s Blues played out that final in Munich, Hazard was still in France, out on the lash one last time with his Lille team-mates.

“We were certain to finish third and we were facing Nancy the following day,” former Lille captain Rio Mavuba later revealed. “It was Eden Hazard’s last match with Lille and he wanted to organise a little something.

“We decided to go have a little drink. A little drink that dragged on somewhat. The following morning, Eden was still drunk. That evening against Nancy, not even with 30 minutes played, Eden had already bagged a hat-trick.”

There was certainly no sign of a hangover come kick-off, with a boyish grin as he looked out across a packed-out Stadium Lille Metropole – also Lille’s last game there, after an eight-year exile in the out-of-town athletics venue – full of banners reading ‘Merci Eden’ among Belgian flags, showing their love for a 21-year-old who’d already become one of the greatest players in the club’s history.

Brazilian striker Tulio de Melo led the line, while Hazard supported from the right, with Dimitri Payet on the opposite flank, Joe Cole operating in the No.10 role, future PSG man Idrissa Gueye at the base of midfield and 18-year-old academy graduate Lucas Digne making an early appearance at left-back.

It didn’t take that special side long to wreak havoc against midtable Nancy, and the players seemed to revel in the lack of pressure in a game that had more the air of a testimonial. Just like the night before, they were there to enjoy themselves.

Not even 10 minutes had gone by before Hazard was put through after some sublime one-touch interplay between Cole and De Melo in the centre of the park. He made no mistake with his finish.

Stood in a huddle to celebrate, there was some degree of choreography in what appeared to be a less-than-subtle nod – or the opposite, in fact, tilting their heads back to mime necking booze – to the previous night’s antics.

While there was no lack of sharpness in the slick passing or dead-eyed finishing for the opener, some sloppy defending at a set-piece allowed the visitors to get back on level terms within a couple of minutes as Nancy full-back Reynald Lemaitre found himself free to send a glancing head in at the near post.

But Lille weren’t going to allow Hazard’s farewell party to be ruined, and soon enough Payet produced a trademark silky touch to turn his man before nutmegging another Nancy defender to tee up De Melo, who tapped home to regain their lead in the 21st minute.

Nancy had enough to worry about with a young Hazard at the peak of his powers. Facing an in-the-mood Payet as well? That’s just cruel.

With a lead restored and the pouring rain failing to dampen the party atmosphere, Lille sniffed blood and quickly put Nancy to the sword.

Having received the ball just outside the centre circle, Payet exhibited another string to his bow, by sending a looping through ball over the top of Nancy’s backline.

The alcohol in his system evidently hadn’t dulled Hazard’s attacking instincts, given he was on his toes to read the pass and dart into the empty space for a second time in just half an hour.

If you’re the wrong side of 30, chances are you’ll look back wistfully on your 21-year-old self’s ability to shake off the after-effects of a heavy night as if it were a mild cold.

Chances are you wouldn’t have been able to time your run, casually control a ball arriving over your shoulder, before showing enough composure to slot it past an onrushing goalkeeper. That’s just showing off.

After just 34 minutes, the Belgian was gifted a golden chance to score his third when Payet was clipped in the area.

As with his first two gilt-edged chances, it never felt like a possibility that he could miss. Not on that night.

After he completed his first-half hat-trick, De Melo lifted Hazard onto his shoulders to celebrate, showing his gratitude to the best player he’d ever play alongside, and “a very good boy – but a bit debauched,” as he later told Goal.

Hazard had assured a perfect send-off, and he’d done it with an hour to spare. The game drifted from there, with all that needed to be done out of the way promptly. But there was still a chance for the fans to properly show their appreciation to their half-drunk hero, as Lille boss Rudi Garcia introduced Mavuba in his place in injury-time.

After embracing each of his team-mates, Hazard trudged off the turf at Lille one last time, reciprocating his standing ovation by applauding the supporters in response.

“The guy had not even slept, he drank for the entire night and he put away a hat-trick in [just over] 30 minutes,” his substitute recalled.

“We all looked at each other, we told ourselves that this guy was the real deal.”

The strange career of Anthony Vanden Borre: From wonderkid to retired at 29