The night Lionel Messi announced himself to the Champions League 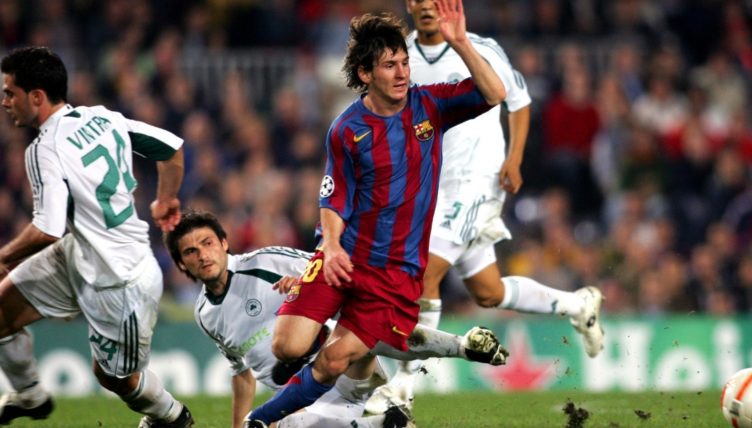 It feels like Lionel Messi has been tearing Champions League defences apart forever, but there’s a first time for everything – even something as long-lasting as this.

Before lining up against Panathinaikos in November 2005, the Argentine had played his part in four fixtures in Europe’s biggest club competition, making his Champions League debut in an uninspiring 2-0 loss against Shakhtar Donetsk, with his only other start coming against Udinese.

The youngster had also come off the bench against Werder Bremen and the Greek side he was about to announce himself to the competition against.

Despite not having made a goal contribution in any of those aforementioned games, it was clear to many that this was a special player and talent, especially as Frank Rijkaard had already made him Barcelona’s youngest-ever player at the time.

Messi also had a goal to his name, having overcome Albacete in La Liga, but this was a man destined to make his mark on the largest of stages.

The Argentine has publicly thanked Rijkaard for giving him his first opportunities, in the first team generally and in the Champions League. But Henk Ten Cate’s comments from the book ‘Messi’, by Guillem Balague, showed there was never any doubt that he was destined for the big time from his first appearance in a 2003 friendly against Porto.

“It seemed as if he had been playing with us all his life, his movement was so natural,” he explained. “The first time the ball came to him he created a scoring chance. The second time he nearly scored. If you are 15 or 16 in a game like that against Porto, at the opening of a new stadium full of people, and you do all that, it is because you are something special. Frank [Rijkaard] and I looked at each other: ‘What the f**k? Did you see that?'” 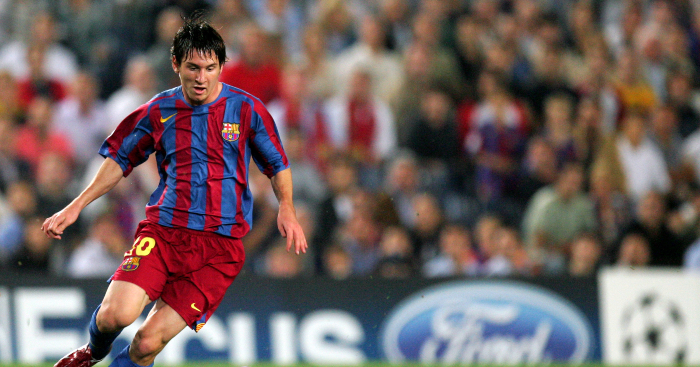 As the game got going, it became evident that Messi was being afforded the perfect stage on which to shine, as Marco van Bommel scored within 50 seconds of kick-off by looping the ball over the onrushing goalkeeper, before Samuel Eto’o grabbed the game’s second with a clinical header.

Messi was next up, taking his opportunity to revel in the spotlight just after the half-hour mark.

Over the years, the Argentina international has been lauded for his ability to cause havoc by nipping into tight areas as well as his skill on the ball, with that awareness and ability being abundantly obvious, even at this early stage of his career.

His maiden goal in the competition started by the Argentine backing Eto’o in the press, which caused panic between two Panathinaikos defenders, who immediately started falling over each other as they both tried to clear the danger with this whippet sniffing around.

They made a complete mess of it, leaving the ball loose enough to encourage goalkeeper Mario Galinovic to come out in an attempt to close the angle and nullify any threat posed by Messi.

In fairness, the stopper wasn’t to know that this teenager would be capable of producing the level of skill he’s showcased for many years since, but he was evaded with ease as Messi flicked the ball over the Croatian’s head before getting ahead of the recovering defender to tap it over the line.

There was defiance and joy in Messi’s celebration, as he turned to the jubilant supporters with his arms in the air before being congratulated by Ronaldinho and Eto’o.

However, there wasn’t the shock factor you’d usually expect from a teenager scoring their first goal in the competition they will have dreamed of playing in their entire lives.

Messi was in the Barcelona team to stay and was determined to show it – as he did time and time again throughout his career until this summer.

He linked up with his team-mates in the front three for Barca’s fourth before finishing the game with an assist for Eto’o’s wonderful goal as the Cameroonian secured his well-taken hat-trick.

It wasn’t until two seasons later that Messi started regularly scoring in the Champions League, as he picked up an injury against Chelsea in the quarter-final before Barcelona went on to beat Arsenal in the final.

However, that Panathinaikos game offered a glimpse of what was to come, even if it would be impossible for many to imagine just how breathtakingly brilliant he would be.

With that first goal in mind, perhaps it’s fitting that his 100th in the competition came against the Greek outfit’s bitter rivals Olympiacos.

There were also further glimpses of what Messi could do domestically that season before the injury against Chelsea, as he assisted in an El Clasico, scored twice in just 17 minutes off the bench against Real Mallorca and converted the winner against Athletic Bilbao.

So many of the game’s greats have gushed over the worldbeater’s talents down the years, and for good reason, with that now revered talent and application already being clear to see from that very first Champions League goal.

READ NEXT: Lionel Messi needed just 8 mins of the season to invent a new assist