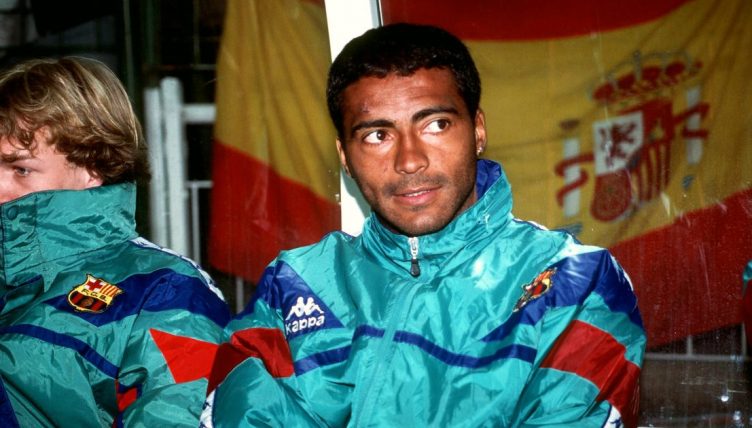 On Sunday, January 16, 1994, Romario did something that David Beckham and countless Real Madrid and Barcelona fans have only ever dreamed of.

This was not your usual handbags at dawn scenario, either. Romario cold-cocked Simeone with a brutal left hook that left the Argentine floored.

Romario was been best known for his party lifestyle, silky skills and seemingly effortless finesse in front of goal for both Brazil and Barcelona. But there had always been a self-destructive streak to the striker nicknamed ‘Baixinho’, or ‘Shorty’ – a moniker referencing his stocky 5’6″ stature and apt considering his short fuse.

As a youngster, Romario had come perilously close to torpedoing his entire career before it had begun after being sent home from the 1985 World Youth Cup in Russia for urinating from a hotel balcony.

In later years, after he had departed Barcelona, Romario was at it again, landing himself in hot water at Fluminense after attacking a fan who had the temerity to throw six live chickens at him during training.

The Simeone situation was different though.

For one thing, the late, great Johan Cruyff was at least partially to blame.

Barca boss Cruyff declared Romario a “genius” during his time at Camp Nou, but he would have been wise to recall the old cliche about there being a fine line between genius and madness.

Romario crossed that line against Sevilla that night, albeit with a little nudge from his manager.

The precursor had come a week earlier, when Romario starred in what was arguably his greatest night for the Catalan club, a 5-0 shellacking of bitter rivals Real Madrid.

Romario had never been better, bagging a hat-trick in a 5-0 El Clasico masterclass, capped off by a third goal that came to define his time at the club.

Today is the 25th anniversary of Romario performing the greatest Seeya Later in the history of Seeya Laters. In the Clasico too.

Dubbed ‘la cola de vaca’ or ‘the cow’s tail’, it was a move that enshrined Romario in Spanish football folklore; a goal forever referenced by Barca fans of a certain generation.

Fast forward a week, however, and Romario found himself warming the bench for Barcelona’s trip to the Ramon Sanchez Pizjuan to face Sevilla.

It was a decision that baffled fans and team-mates alike. Yet to Cruyff, somehow, it made perfect sense. Eager to keep Romario’s already sizeable ego in check, Cruyff figured a stint on the sidelines would serve as the perfect reminder that no one was irreplaceable at Barcelona.

He also reckoned that in the event he did actually bring Romario on, the Brazilian would be sufficiently fired up to prove a point and make the difference on the night.

But while Romario was certainly psyched up by the time he entered the fray with 15 minutes to go, what Cruyff never reckoned with was the presence of Simeone.

Arriving in Seville from Pisa in 1992, ‘El Cholo’ had wasted little time in honing a unique brand of shithousery that defined him as a player and to this day as a coach. 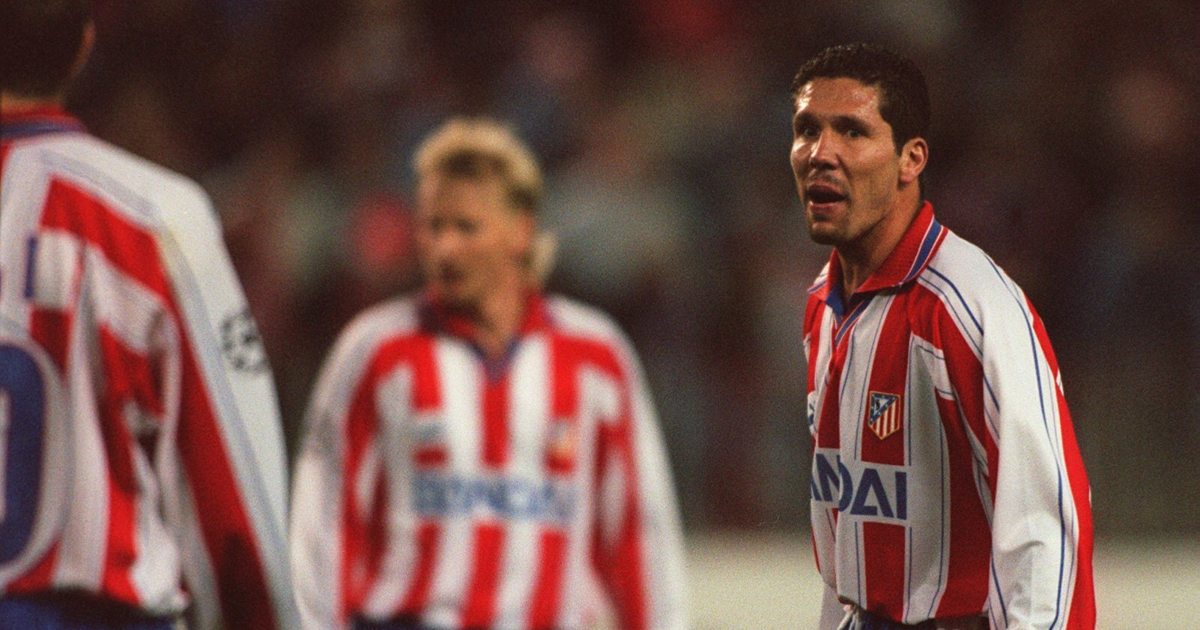 READ: Diego Simeone & a nutmeg so perfect he applauded himself midway through

A brilliant box-to-box midfielder, Simeone was the first to admit he had a penchant for the dark arts, famously describing himself as playing like a man “holding a knife between his teeth”.

Chief among his array of tricks was an innate ability to sense mental weakness among opponents and exploit it when the opportunity arose – as David Beckham later discovered at the 1998 World Cup.

It was a similar story on that January night back in 1994 in Seville. Simeone quickly sensed something was amiss with Romario after he came on with Barca being held at 0-0 by the hosts.

Evidently irked at being left on the bench, Simeone set about doing everything in his power to exacerbate the situation.

It began with a few choice words – according to Romario, Simeone insulted his mother and said he was “a cockroach” – before escalating to kicking out at the Brazilian.

And the main flashpoint arrived in the closing minutes after a cross came into the Sevilla box.

Romario came flying in sensing his opportunity. But he wasn’t looking to score – this was all about retaliation. Charging in, he only had eyes for Simeone, delivering a savage sucker punch to the left side of the Argentine’s face.

The plan had worked to perfection with Simeone collapsing in a heap. An understandable reaction given the ferocity of the hit.

A red card was almost immediately brandished in the direction of Romario, who pleaded his innocence with all the conviction of a naughty school boy.

Speaking days after the game, he continued to show no remorse for his actions, saying: “He teased me and kicked me. I fought back and the referee just kicked me out.”

Team-mate, friend and fellow madman Hristo Stoichkov, meanwhile, came over like a proud father, describing the punch as one “worthy of Mike Tyson”.

The Spanish FA were significantly less impressed though, handing Romario a five-game ban that rather handily allowed the striker enough time to return to his homeland and Rio for some much-needed “recuperation” that largely involved playing volleyball on the beach.

Perhaps due to some sense of personal guilt for his role in proceedings, Cryuff fixed his ire on Simeone, saying afterwards he had wanted to be subbed on so he could have punched him too.

Unsurprisingly, Simeone fired back, accusing Cruyff of “crying to reporters” rather than having Barcelona do their talking on the pitch.

In Romario’s absence came a major wobble, with Barca following up a 0-0 draw with Sevilla with defeats to Real Sociedad and Athletic Bilbao as well as a 6-3 hammering at the hands of Real Zaragoza.

When he did eventually return, however, Barcelona kicked back into gear.

Buoyed on by a well-rested Romario, they went on to win 12 and draw two of their final 14 games, eventually pipping Deportivo La Coruna to the title, albeit in fortuitous circumstances after Depor captain Miroslav Djukic missed a last-minute penalty in a draw with Valencia on the final day.

That failure opened the door to another Barcelona title triumph, secured with victory over Sevilla in a topsy-turvy affair that saw the Catalans fall behind twice before roaring back to win.

Though Simeone threatened to turn pantomime villain again after opening the scoring, Romario had the last laugh with a goal in a 5-2 triumph that not only secured a fourth consecutive La Liga title but also bagged the Brazilian the coveted Pichichi Award as the division’s top scorer.

Even better was to come later that summer, with Brazil lifting the World Cup in the US.

Simeone, by contrast, was part of the Argentina squad that suffered an epic collapse in the wake of the drugs test scandal that saw Diego Maradona sent home.

Romario went on to claim the FIFA World Player of the Year award, but a 4-0 hammering at the hands of AC Milan in the Champions League final had already heralded a changing of the guard at the Camp Nou.

Romario was heading for the exit by January 1995, following an abject start to the season that included just four goals and a 5-0 reversal at the hands of Real Madrid and his former team-mate Michael Laudrup.

Despite talk of signing a new contract at Barca, Romario eventually opted to jump ship back to Flamengo.

By then his relationship with Cruyff had deteriorated to the point that the Dutchman declared: “If Romario is not happy here and wants to go home, he no longer interests me.”

Simeone eventually gained some modicum of revenge after moving on to Atletico Madrid, where he went on to win a La Liga and Copa Del Rey double in 1996, pipping Barca to victory in both. It was a development that ultimately led to Cruyff’s exit from the club.

Years later, Simeone revisited the punch in an interview that saw the midfielder getting misty-eyed about the way the beautiful game used to be.

“It was a good blow, wasn’t it?” he joked. “Romario was irritated by a problem at Barcelona, and that left him a little vulnerable. We acted on the edge. Provoking and testing good opponents was part of football in those days.

“Romario and I were part of a generation that left things that happened on the field on the field. That’s how it should always be.”

TRY A QUIZ: Can you name the top scorer for every La Liga season since 1990?