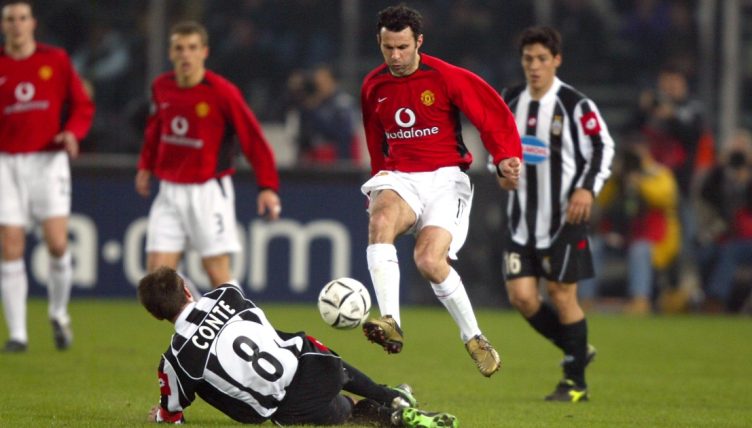 It’s hard to conceive of Ryan Giggs playing for anyone other than Manchester United.

Between 1990 and 2014, Giggs made an incredible 963 appearances for the club and won 34 major honours as a United player. Only Manchester United and Liverpool have won more English league titles than Giggs has alone.

His United career outlived all the other members of the Class of ’92 and iconic figures like Roy Keane. He even outlasted Sir Alex Ferguson and there were times it looked he’d go on longer than the Queen.

All this means that the one time Giggs was in danger of leaving Old Trafford has been strangely airbrushed out of history.

Back in 2003, Giggs was going through something of an identity crisis. United had won three successive Premier League crowns between 1999 and 2001 but Ferguson wanted to adapt his tactics after being out-thought in Europe.

His answer? Juan Sebastian Veron and a shift towards a 4-5-1 formation. While Veron never lived up to the hype at Old Trafford, Giggs was still forced to adapt his role from flying winger to that of a more considered midfielder.

The struggle was painfully apparent during the 2002-03 season. Giggs spent much of the campaign flickering on the margins of matches as United slipped behind pace-setters Arsenal.

Giggs has been admired more by opponents than by certain Manchester United fans. “I love the way Ryan Giggs plays,” said Raul, expressing a sentiment which was heard less than ever among the United faithful.

Rumours of a move to Inter Milan began to circulate. After reports in December 2002 suggested Inter would move for Giggs in the January transfer window, the BBC ran a poll asking whether the Wales international should stay at the club.

14,289 people replied. 47% answered ‘yes’. At that point, he’d not scored a goal in 18 matches and looked a shell of the player that had tormented defences across Europe.

His substitution during a home match against Blackburn was greeted with cheers by the Old Trafford crowd.

And then there was that miss. During an FA Cup match against Arsenal, Giggs rounded David Seaman and ensured he’d feature in every football bloopers video for the rest of eternity.

Even Ronnie Rosenthal was moved to offer his condolences.

On this day in 2003, in #Facup 5th round Ryan Giggs missed this sitter for #ManUtd. How did he miss that?!#Arsenal went on to win 2-0 and Sir Alex was furious, with Becks getting a stray boot in the eye! Talk about hairdryer treatment 🤷‍♂️ pic.twitter.com/jlnUC1wG7f

So it was no surprise to see Giggs on the bench when United faced Juventus in the Champions League second round group stage knowing that a win would secure a quarter-final place.

United started well but an injury to Diego Forlan meant Giggs was called onto the pitch after just five minutes. With his United future on the line, the winger delivered the performance of his career.

It didn’t take him long to make an impact. Within 10 minutes, Giggs was picked out by a pinpoint Veron cross in the penalty area. After making room for the shot, he rolled the ball past Gianluigi Buffon to give his side an early lead.

While the goal was important for United, it was priceless for Giggs. As if an errant hypnotist had snapped him out of a trance, he began to look like the player of old again.

And, just before half-time, Giggs produced a moment of extraordinary quality that firmly reminded everyone of his brilliance.

Following a stray pass from Antonio Conte (yes, that one), Giggs collected the ball on the halfway line and travelled forward with the purpose of a commuter determined not to miss their train.

In truth, the first touch was a little heavy. But, such was the respect he demanded, the Juventus defence backed away terrified as if they’d spotted a spider on the wall.

Ciro Ferrara was left with twisted blood as Giggs raced past him while Paolo Montero’s attempt at catching his opponent was more futile than trying to outrun a Ferrari.

Buffon was left rooted to the spot as Giggs slotted home and ran to the United supporters and pointedly reminded them that he was Ryan Fuckin’ Giggs.

Ryan Giggs scored this brilliant individual goal against Juventus in 2003, from a sloppy pass by Antonio Conte.pic.twitter.com/4kZ4OK3NER

He was substituted at half-time due to a niggle but those 40 minutes in Turin was not just one of the great cameo performances, it saved his career at United.

With their season revitalised, United reeled Arsenal in and regained the Premier League title with Giggs playing a crucial part in the run-in. That summer, David Beckham was sold to Real Madrid and Giggs was safe.

He’d go on to win a further 10 trophies at Old Trafford.

“Around 2003, the summer that David Beckham left, there was talk of me going to join Inter Milan,” he later said in an interview with beIN SPORTS in 2020.

“I never heard anything from them personally, but I didn’t have the greatest start to that season. I ended up doing okay that season, but there was serious talk of one of us going and it was either me or David.

“He ended up leaving. That was the closest I ever got to leaving Old Trafford.”

And it was one magical cameo in Turin that arguably saved Giggs’ Manchester United career.