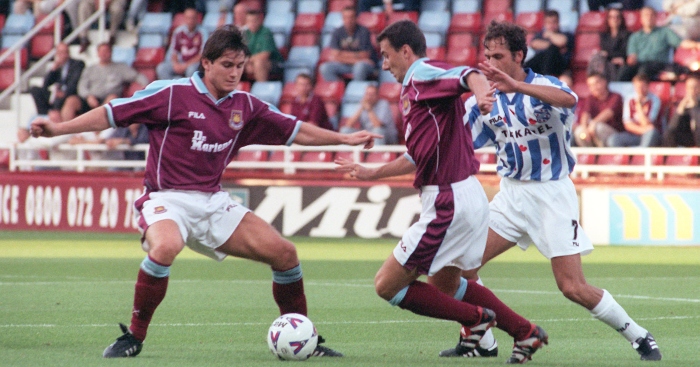 The Intertoto Cup has always carried a mysterious air, at least when glancing at it from England.

The competition has the impression of those individually-wrapped croissants you see in continental branches of Lidl, or the hot food vending machines which pop up in the centre of European cities.

There has always been a mystique about it, and it feels like something you need to try at least once to get a full, well-rounded experience, but at the same time, you’re not sure what you’re doing when you’re actually doing it.

This was a competition with multiple finals, so we were confused from the get-go. There are only so many times you can brush something off with the explanation that ‘this is probably normal on the continent’ before deciding to scrutinise your own words.

Still, whether it was due to confusion over what the tournament entailed, or a simple anger at having to come back early from holiday and play ‘competitive’ football, the English teams who took part in the first few editions of the tournament seemed to be doing so under duress, like a Brexit Party member pursuing a seat in the European Parliament.

Sure, it wasn’t always as flagrant as Spurs’ approach to the competition, when they brought in a bunch of players on short-term deals (including a 34-year-old Alan Pardew and on-loan Barnet defender Mark Newson) and lost 8-0 to Cologne during a group stage exit which saw English clubs threatened with expulsion from UEFA competitions if it ever happened again, but none of the three English clubs in the first edition of the competition in 1995 made it through to the UEFA Cup proper.

We had to wait four years for another entrant from the Premier League, and it almost felt like an unwanted consolation prize for a West Ham United side whose fifth-place finish somehow wasn’t enough to see them into Europe by traditional means.

The mid-July start certainly won’t have been many people’s preference, and West Ham’s rustiness was clear to see in an unconvincing aggregate win against Jokerit, a Finnish club which ceased to exist within five years of the game, presumably out of shame.

“Before the first game against Jokerit we had been training for maybe four or five days. It really was a pre-season game,” goalkeeper Shaka Hislop later recalled.

And if that didn’t convince you enough, perhaps the bright sunshine, 11,000 crowd and lack of names on the back of shirts for Paul Kitson’s first-leg winner will do the trick.

It tastes great in its own right, but it has that extra sweetness from the association with summers on the Mediterranean coast and brightly coloured drinks by the pool. You don’t realise that’s the association your brain is making, but when someone explains it to you it makes perfect sense.

Is this too laboured an introduction to Frank Lampard, fresh off a blasted free-kick in Finland, scoring what would later become known as a vintage Lampard strike in the semi-final against Heerenveen? I’m choosing not to answer that directly.

After winning the ball in midfield, Lampard strolled through a gap as big as the space between the Intertoto cup and the regular season before thumping a long-range strike into the top corner of Hans Vonk’s net.

When Lampard was doing the same for West Ham and Chelsea in domestic competition, there was something familiar and comforting about it all.

West Ham had made it to the final with just one goal conceded along the way, and frankly it’s impossible to tell whether it was the quality of Neil Ruddock and a 21-year-old Rio Ferdinand that made the difference, or whether it was the paucity of the opposition. Genuinely impossible.

Harry Redknapp’s team managed to avoid Juventus in one of the three finals (did we mention there were three finals?) and instead faced off against a Metz side who had got there with victories over the sixth-best team in Slovakia, the fifth-best team in Belgium (on away goals) and the fifth best team in Poland.

Obviously, then, West Ham lost the first leg at home.

Louis Saha’s goal at Upton Park wouldn’t see the French side through, though, as second-leg strikes from Trevor Sinclair, Lampard (again) and Paulo Wanchope sealed the deal.

Wanchope’s clincher is a real relic of its time, with the big-money advertising boards behind the Metz goal displaying chocolate and England’s bid to host the 2006 World Cup. Remarkably, the ‘not for girls’ chocolate bar has the stronger and longer-lasting legacy.

The match sharpness gained by all that summer football stood West Ham in good stead for the start of the domestic season, and they were as high as third in the table after taking 13 points from the first five Premier League games.

However, by the time a serious European test came around, they already seemed wiped out, failing to break down Steaua Bucharest in a second round UEFA Cup exit.

Was it worth all the effort? Well, at least it prepared the fans for further European exits at the hands of Romanian opponents in 2015 and 2016, so that’s something.

Sorry if you were expecting a more dramatic ending, but you’re a fool for thinking a piece about a competition with three finals would provide anything close to a satisfying conclusion.