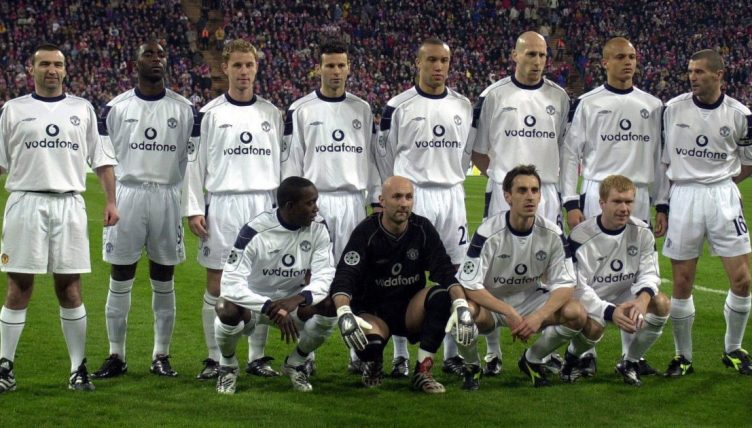 While Manchester United were preparing to face Bayern Munich in a Champions League quarter-final in April 2001, one fan was getting ready for an even greater challenge.

Two years earlier lifelong United fan Karl Power had begun hatching an audacious prank alongside a group of friends in a Manchester pub.

Simple pitch invasions had been done before, and would be done again, so they had to do something unique to make them stand out.

They eventually decided to gatecrash the pre-match photo of United’s starting XI, and after travelling out to Munich disguised as journalists, everything was put in place.

“We planned it like a military campaign and brought three United kits with us – red, white and blue,” Power told The Sun in 2001.

“Then we found out where the team were staying and got one of the directors to tell us what colour they’d be wearing.

“We then went back and rehearsed it all in our hotel room. We got a taxi to the ground, pretended we were with a TV crew, and the gatemen let us in.

“We managed to get down to pitchside and waited for the players to come out of the tunnel.

“Then with 20 minutes ’till kick-off, we saw an opening where there were no stewards and a couple of us walked all the way round the running track and ended up behind the goal.

“We sat with the photographers watching the warm-up. Then, when the teams walked out, I went to the players’ entrance and knew nothing was going to stop me.”

Power, wearing United’s away kit with Cantona and a number seven on the back, took off his tracksuit and brazenly strolled onto the pitch at Munich’s Olympic Stadium.

The prankster took up a position alongside Andy Cole for the team photograph, but Gary Neville immediately noticed that something was going on and nearly ruined everything.

On this day in 2001, Karl Power managed to sneak into Manchester United's team photo before their clash with Bayern Munich

Roy Keane was ready to kill him 😂😂😂 pic.twitter.com/NGmoJ3BDKl

Power had positioned himself as far away from Roy Keane as possible, but that couldn’t save him from a classic Keane death stare.

He still kept his nerves and stayed put as the photographers snapped away. United’s 12th man in the team photo just happened to be an unemployed labourer from Greater Manchester.

Somehow they had pulled it off without the stewards even noticing and Power retreated to the side of the pitch before watching the game from the stands.

United may have lost 2-1 and been knocked out of the Champions League, but after the game everybody was talking about the mysterious figure in the photo.

The stunt dominated the front pages and also went global, with Power briefly becoming a minor celebrity after being outed as the impostor.

“It must be the biggest and best football sting of all time,” Power reflected a few days later.

He clearly had a taste for the limelight and went on to play on the Centre Court at Wimbledon, walked out to bat for the England cricket team at Headingley and stood on the winner’s podium at Silverstone.

He was even banned from Old Trafford in 2003 after invading the pitch along with some accomplices before a game against Liverpool.

But Power’s moment in Munich remains his greatest achievement, and will go down as the most memorable team photo in Champions League history.