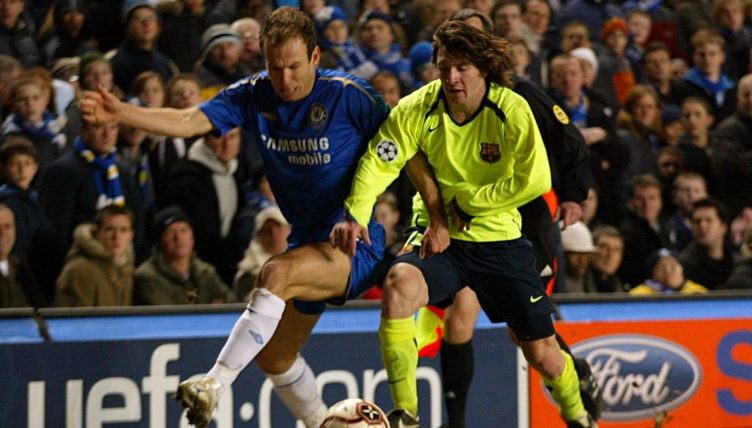 Having watched Lionel Messi reach such levels of brilliance and break so many records over the years, it’s difficult to remember a time when he wasn’t among the world’s best players.

But like with every other footballer, Messi had to start somewhere, and he was initially in the shadow of Fifa World Player of the Year Ronaldinho.

Back in February 2006, the winger travelled to London ahead of Barcelona’s Champions League last-16 clash against Chelsea. For many English football fans, it would be the first time they’d watched the young forward in action.

The Argentina international had only been playing in Barcelona’s first team for 16 months but was regarded as one of the best prospects in world football.

Chelsea assistant coach Andre Villas-Boas compiled a scouting report before the game, attempting to give his players an insight into the young Messi.

“Quality and speed, but very left footed,” Villas-Boas reportedly wrote. “Exactly the same behaviours as Ronaldinho. Inside between lines or diagonals. Encourages team forward by ball driving. Amazing 1 vs 1.

“If option is to foul him, it is important to do it outside the box and as early as possible as [he] recovered from an injury recently.”

One section on Messi ends with the simple message: “Fouls!” Chelsea were clearly planning to give the teenager a rough introduction to English football.

There was already a lot of bad blood between the two sides following their dramatic and controversial Champions League last-16 clash in 2005.

After the Blues lost the first leg in Spain 2-1, the headlines were dominated by Jose Mourinho’s allegations that Frank Rijkaard had influenced the second half, in which Didier Drogba was sent off and the visitors conceded twice, by visiting the dressing room of referee Anders Frisk.

Chelsea came out on top after winning the second leg 4-2 and Rijkaard had to be restrained as a fracas erupted near the tunnel, while Mourinho has subsequently gone back on his initial suggestions that he saw the Barcelona boss visit Frisk.

Despite not being named in the matchday squad for those games in 2005, Messi still felt the intense rivalry in the build-up to the rematch.

“We would rather play Arsenal, Manchester United or anyone else than be on the pitch with Chelsea.”

While Barcelona’s front three would frighten most teams, Mourinho’s side had one of the best defences in world football. With Petr Cech in goal and a formidable centre-back partnership of John Terry and Ricardo Carvalho, they conceded just 15 goals in 38 Premier League games in 2004-05.

Impressing in La Liga is one thing, but many pundits questioned how the diminutive forward would cope against the physical, imperious Chelsea defenders. In the space of 90 minutes, he passed the litmus test and silenced those doubters once and for all.

Wearing the No.30 on the back of his fluorescent yellow shirt, Messi immediately began turning the experienced Chelsea defenders inside and out with his incredible footwork.

The pre-match talk had been about the poor quality of the pitch at Stamford Bridge but Messi soon made the moody surface his new playground. Are we really supposed to believe that he couldn’t do it on a cold, rainy night in Stoke?

With Villas Boas’ pre-match comments ringing in his ears, a frustrated Asier del Horno nearly rearranged Messi’s kneecap with a reckless challenge in the early stages.

Refusing to be intimidated, Messi carried on where he left off and put Arjen Robben on his backside with a cheeky piece of skill. Del Horno, who was already walking a tightrope, then clattered into him, sparking a melee on the pitch.

On this day: 2006 – Asier Del Horno was sent off for a soft foul on Lionel Messi (vs Barcelona). #CFC #Chelsea pic.twitter.com/t4IRTruoIn

With Messi rather theatrically rolling around on the floor, the referee reached into his pocket and gave Del Horno a straight red card. Chelsea’s task had suddenly got even harder.

“How do you say cheating in Catalan?” a furious Mourinho said after the game. “Can Messi be suspended for acting? Barcelona is a cultural city with many great theatres and this boy has learned very well. He’s learned play-acting.”

While Del Horno also looked stunned by the referee’s decision, we bet that he walked back to the dressing room and was secretly glad to be spared any further embarrassment.

Despite Chelsea’s best attempts to kick Messi out of the game, he was able to shake off their poorly-timed tackles, and the defenders were left seeing nothing but a cloud of Messi’s dust.

The 10 men of Chelsea took a surprise lead in the 58th minute following Thiago Motta’s own goal, only for Terry to then deflect Ronaldinho’s effort past Cech and into his own net.

With Barcelona back in the ascendency, Messi picked up the ball on the edge of the area and rattled the angle of post and crossbar with a beautifully clipped shot.

Having watched Ronaldinho score that goal at Stamford Bridge a year earlier, Messi was now the one standing out in a game littered with star players. The passing of the torch had well and truly begun.

Like a cat toying with a helpless mouse, Messi was too quick and skilful for the Chelsea defenders and clearly enjoyed humiliating them. The likes of Terry and Carvalho suddenly seemed mortal for the first time in years.

Samuel Eto’o then headed home the winner in the 80th minute, giving Barcelona a huge advantage ahead of the second leg in Spain.

Messi may not have registered a goal or assist at Stamford Bridge, but he had well and truly announced himself to the world.

While Chelsea defenders would have undoubtedly had sleepless nights in the build-up to the second leg, Messi wasn’t able to have the same impact at Camp Nou.

He started brightly but went off with a hamstring injury after 24 minutes, with Henrik Larsson replacing him. Barcelona still got the job done without their little magician, progressing to the quarter-finals following a 1-1 draw.

The Spanish giants went on to beat Arsenal in the 2006 Champions League final but Messi had to watch on from the sidelines as he recovered from his injury.

While he may have missed that game at the Stade de France, Messi’s performance at Stamford Bridge proved to be a sign of things to come for English sides.