When an ‘Irishman without rules’ outshone Paulo Dybala at Palermo 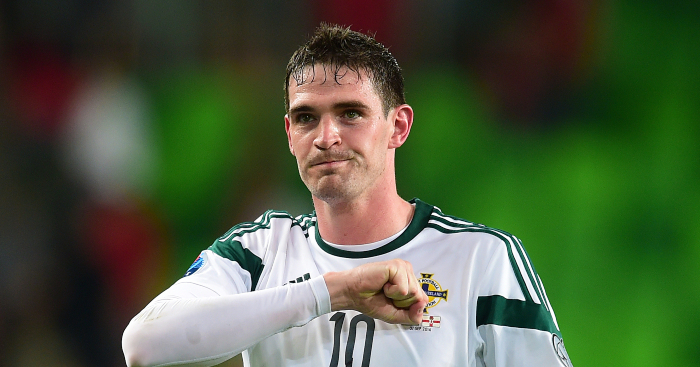 Kyle Lafferty outscored Paulo Dybala during his one season at Palermo. But the club considered him a ‘womaniser’ and sent him packing.

Throughout the mid to late 2000s, the pink-shirted Sicilian club employed some of the best attackers in the game. Luca Toni, Edinson Cavani, Javier Pastore and club legend Fabrizio Miccoli each contributed to the club’s rise from lower-league also-rans to Serie A heavyweights, and between 2005 and 2012, Palermo qualified for the UEFA Cup five times.

By the 2012–13 season, however, that forward firepower had been weakened.

Miccoli was 33, future Hull City signing Abel Hernández was no Cavani and Argentine flop Mauro Boselli was as impotent as he had been for Wigan Athletic.

Things weren’t helped by the club’s trigger-happy chairman, Maurizio Zamparini, who over the course of that campaign sacked no fewer than three managers. (One of whom was chucked, rehired, then promptly chucked again.)

Somewhat predictably, Palermo were relegated, ending their nine-year spell in Serie A.

The summer of 2013 thus signalled a period of overhaul for the team. Miccoli departed after six seasons (and 81 goals), playmaker Josip Iličić left for Fiorentina and numerous other faces came and went.

On June 16, however, things got really interesting.

With the club needing a goalscorer to replace the outbound Miccoli, chairman Zamparini found the answer in an unlikely place. Namely, the bargain bin of the Swiss Super League.

“We have sealed a deal for Kyle Lafferty,” Zamparini proudly announced.

The next Luca Toni

Kyle Lafferty, then 25, had just scored a modest eight goals in 28 games for FC Sion, having left Rangers in acrimonious circumstances the season before.

While the forward was a regular for the Northern Irish national team, this was not a player whose stock was on the rise. The next Edinson Cavani he was surely not.

But in Zamparini’s eyes, Lafferty possessed just what the team needed: “He is someone who can lead the attack by himself, similar to Luca Toni.”

Fact check: Toni scored 51 goals in 83 appearances for Palermo. Lafferty scored 10 in 83 for Burnley (the Palermo of Lancashire).

The transfer didn’t come completely out of the blue.

Palermo’s new manager for the 2013-14 season was former Milan legend Gennaro Gattuso, who had a double connection with Lafferty.

Both had a history with Rangers, and, more importantly, Gattuso had just been managing and playing alongside Lafferty at Sion, where the Italian had a player-coach role. Lafferty hadn’t scored many goals in Switzerland, but Gattuso and Zamperini saw potential there.

Lafferty, for his part, was very happy to go along with it.

“When I was younger I watched a lot of Italian football,” he said. “And I know there’s a very passionate fanbase here at Palermo.”

It took Lafferty just 16 minutes to score on his debut, which came in the second round of the Coppa Italia, but the forward didn’t immediately find his groove in Serie B.

After failing to find the net in his first two league appearances — a draw and a defeat — he found himself on the bench.

Palmero earned their first win of the season in his absence.

But in the fourth game of the season, Lafferty properly announced himself in Sicily.

Five minutes after coming off the bench, with Palermo trailing 1-0 to Cesena, the former Rangers forward somehow claimed the rights to a direct free-kick — even though Paulo Dybala was on the pitch.

And then he did this.

Lafferty bent the ball into the top-left corner, leaving the Cesena keeper rooted to the spot. Dybala, a mere decoy in the wall, was as impressed as anyone, and Palermo went on to win the match.

The Palermo support immediately took to Lafferty. Partly because of that brilliant goal, and partly because the lanky forward looked like ‘Dylan Dog’, the protagonist of a popular Italian comic.

Lafferty's nickname at #Palermo is "Dylan Gol" a play on "Dylan Dog", which is a famous comics series in Italy. pic.twitter.com/3g43ds8VCF

Lafferty was later written into an issue of the publication.

From that point on, the former Rangers man continued to find the net, partaking in choreographed celebrations with his team-mates and scoring an absolute stunner in the last match before the winter break.

He finished the season with 12 goals in all competitions — more than Dybala and future Italy international Andrea Belotti — and received the Fans’ Player of the Season award.

Lafferty in Sicily was proving an unqualified success.

Everything appeared to be going well, and with Palermo getting back into Serie A, Lafferty had a chance for further glory. The optimistic forward said the squad had a “big future” ahead of it.

Yet chairman Zamparini had changed his tune.

In June 2014, the club sold Lafferty to Norwich, with Zamperini eviscerating his former player in an interview on Italian radio.

“He is an out-of-control womaniser, an Irishman without rules,” said the chairman. “He is someone who disappears for a week and goes on the hunt for women in Milan.

“On the field he’s a great player, because he gave us everything he had and more. In terms of his behaviour, however, he is uncontrollable. My coach told me he cannot sort this player out, so he has to go.”

After selling Lafferty, Palermo spent three seasons in Serie A before suffering another relegation in May 2017. Then, in the summer of 2019, the club tumbled down into Serie D, the fourth tier, after forgetting to buy a valid insurance policy.

Lafferty, though, remains open to a return to Sicily.

“I would love to come back to Palermo,” he said in August 2019. “I remain tied to those colours.”

Whether or not he ever returns, Lafferty’s brilliant year in Sicily will probably go down as the high point of his career.

The last goodbye: When a 37-year-old Gianfranco Zola led Cagliari to glory