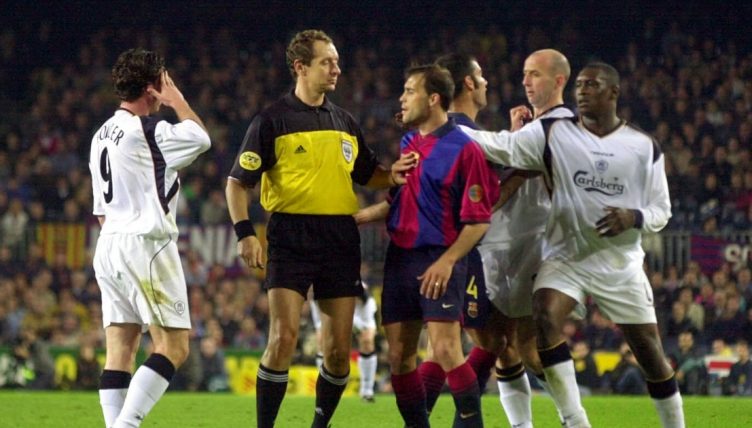 Contrary to what you might expect, football and television weren’t always eager bedfellows.

The first live match shown in the UK wasn’t until 1960 when only the second half of an evening encounter between Blackpool against Bolton was shown on ITV as not to impact attendances at the other 3pm kickoffs.

Despite the success of Match of the Day, which went a long way to cementing football’s status as the national sport among the masses, the tug-of-war between viewing figures and attendances lasted until 1992.

There’d only be one winner.

Football was well into its second wave of popularity by the 1990s and, at the dawn of the 21st century, stood alongside royal funerals and soaps as guaranteed audience-pullers among the British public.

Which left the BBC with something of a dilemma in the spring of 2001.

After ITV had siphoned away coverage of the Champions League, the Beeb were left with the relatively thin gruel of UEFA Cup football – until the 2000-01 season produced a doozy of a semi-final between Liverpool and Barcelona.

Executives at the company would have been rubbing their hands with glee at the prospect of two European heavyweights clashing on primetime TV but there was a complication in the form of a balding menace from east London.

Premiering in 1985, EastEnders was firmly established in the national consciousness by 2001 with its somewhat colourful take on working-class life.

Names such as Ian Beale and Peggy Mitchell became household names but they were nothing on Peggy’s gangster son, Phil.

Having spent the previous year making friends with awe-inspiring skill, Mitchell was gunned down on his doorstep in March and the biggest whodunit since the 1980 shooting of oil magnate JR in American soap Dallas was born.

With the nation’s imagination not just captured but chained to a radiator and begging for release, the BBC were left with the prospect of their biggest ratings-puller clashing with live coverage of the first leg from the Camp Nou.

Their solution? Ask UEFA, Barcelona and Liverpool to push back the kick-off time of the semi-final. Of course.

Amazingly, all sides agreed to push the start of the match back 15 minutes. Steven Gerrard, Michael Owen, Rivaldo, Pep Guardiola and co would have to wait in the changing room while Britain discovered just who shot Phil.

“We asked both sides nicely and they agreed to start later because of EastEnders,” BBC Sport spokesman Mike Hales said.

“It is a well-known programme so the Spanish realise it was important for the BBC,” he added, creating the arresting image of households from Coruna to Cadiz tuning in religiously to Albert Square three times a week.

There’s no record of what the bemused Catalans made of the request but it’s one of life’s greatest regrets that Louis van Gaal had stood down as manager of Barcelona the previous season.

As a result, EastEnders aired a 40-minute special at 7.30 on April 5 and anecdotal accounts say that Liverpool fans inside the Camp Nou were able to watch the denouncement on the big screens.

After its conclusion, Gary Lineker was left to face the nation with one of the more surreal introductions of his broadcasting career.

Some effortless link-play from Lineker here on the night the BBC inexplicably managed to *persuade UEFA to delay the kick-off of Barcelona vs Liverpool by 10 minutes* so EastEnders viewers could find out who shot Phil Mitchellpic.twitter.com/ItlWYmlRDi

The nation was substantially more entertained by the former programme than anything the players of Barcelona and Liverpool would produce.

Watched by a staggering audience of 23 million, by far the most viewed television show of 2001, five weeks of mounting obsession ended with the revelation that Mitchell was shot by his former partner Lisa Shaw.

Other suspects included Sharon Watts, the mother of Steve Owen and Robbie Jackson’s dog, Wellard – the inclusion of the latter suggesting something of a missed opportunity by the BBC.

Nevertheless, William Hill reported bets amounting to six-figure sums and everyone at the corporation seemed happy with the outcome. It remains one of EastEnders’ most enduring storylines.

Meanwhile, Barcelona and Liverpool slugged out an uneventful goalless draw in their semi-final. Lineker compared the 90 minutes to ‘watching a game of chess’ and the BBC match report diplomatically stated that ‘entertaining and exciting football was at a premium’.

The Guardian were more succinct, calling it an ‘awful game’.

In truth, the second leg wasn’t much better but a Gary McAllister penalty was enough to send Liverpool through to the final where they more than compensated for the previous lack of entertainment with a riotous 5-4 win over Alaves.

It’s hard to imagine a similar situation arising in the future. EastEnders, alongside Coronation Street and Emmerdale, is regularly shunted around the schedules and any move to prioritise soaps over football would have the tedious ‘Defund the BBC’ crowd up in arms.

But the story provides a reminder of an era where, if nothing else, football wasn’t quite yet the attention-seeking behemoth it would become.

READ NEXT: Comparing the Liverpool team Houllier inherited to the one he passed to Rafa