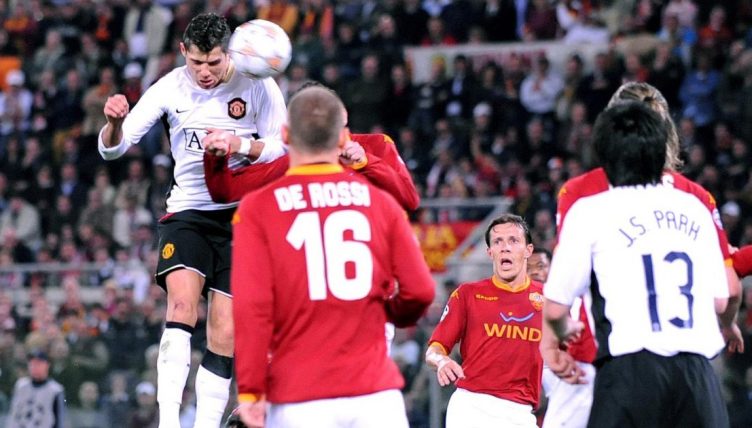 When you have an incredible back catalogue of goals like Cristiano Ronaldo, it’s only inevitable that some of them slip under the radar.

The former Real Madrid forward is regarded as one of the greatest goalscorers of all time, scoring over 800 goals at club level during his illustrious career.

Among those 800+ goals, there have been countless volleys, overhead kicks, headers, chips, free-kicks, penalties…

But when you think of Ronaldo’s first spell at United, there’s normally one goal that immediately springs to mind.

He produced several moments of brilliance for the club but will forever be most associated, at least at Old Trafford, with that stunning free-kick against Portsmouth in January 2008.

And it’s not hard to see why. Just look at it FFS.

His knuckleball free-kick is essentially perfect, leaving a hapless David James rooted to the spot. Several players – including Ronaldo himself – have tried and failed to replicate it over the years.

The stunning long-range effort against Porto and his free-kick against Arsenal also get regular mentions, but we’re here to talk about a completely different goal. A goal that was scored from inside the penalty area.

In April 2008, United travelled to the Stadio Olimpico in Italy to meet Roma in the first leg of their Champions League quarter-final tie.

Having beaten the Serie A side 8-3 on aggregate in the previous season, the Red Devils were strong favourites to progress into the semi-finals, thanks in no small part to the fact that they had one of the best players in the world in their side.

After being branded as a show-pony in his first few seasons at United, Ronaldo honed his incredible natural talent and had truly announced himself as an elite player in the 2007-08 campaign.

He had scored 35 goals in his first 39 appearances, forming part of a deadly attacking trio alongside Wayne Rooney and Carlos Tevez.

But it’s easy to forget that Ronaldo headed into the Roma game with accusations that he was a ‘big game bottler’ ringing in his ears.

While that may seem ridiculous in hindsight, the winger didn’t score his first Champions League goal until April 2007 and often went missing on the big occasions.

Against Roma, Ronaldo had the chance to answer those critics in resounding style. He didn’t disappoint.

With the first half seemingly edging towards a stalemate at the interval, Rooney showed great footwork in midfield before finding Paul Scholes on the right of the penalty area.

Watching the goal back now, as Scholes picks up the ball, Ronaldo is nowhere to been seen. Roma were safe, or so they thought.

The England international played a seemingly aimless cross towards the penalty spot as the defenders were still completely unaware of the impending danger.

Despite not even being in the television frame when the cross was hit, Ronaldo came thundering into the box like a bullet train to catch everybody off guard.

He then produced a Michael Jordan-esque leap and showed the incredible athleticism and hangtime of the NBA superstar before powering a header past Doni and into the bottom corner.

Ronaldo injured himself and poleaxed poor Marco Cassetti in the process, leaving the bewildered defender in a heap on the floor.

“His header was absolutely fantastic,” Sir Alex Ferguson said after the full-time whistle, “his spring and courage to go in front of the defender – I think the defender thought he was going to get it. It was the spring [that did it]. It was a centre-forward’s header. It reminds me of myself!”

Rooney doubled their lead in the second half and United booked their place in the 2008 Champions League final after overcoming Barcelona.

Ronaldo netted yet another gravity-defying header in the final against Chelsea in Moscow and has produced similar efforts for Madrid and Juventus, but there are very few that rank alongside that goal against Roma.

“His goal that he scored against Roma, to this day, is the best goal I’ve ever seen,” Gary Neville told ESPN in October 2018.

“It’s the most miraculous goal that I’ve ever seen. He jumped from the edge of the box and headed it on the penalty spot at full speed.

“And he’d sprinted from the halfway line nearly. I had never seen anything like it.”