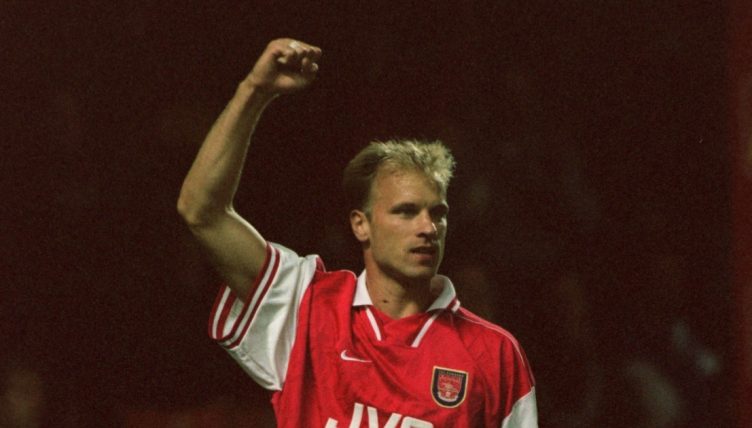 Arsenal legend Dennis Bergkamp may have been a perfectionist footballer, but he also had a fine line in understatement.

When asked about his performance against Leicester in August 1997, Bergkamp said: “When I look back on the match, it was a typical English game with the crowd close to the pitch.

“At that time I started to feel really comfortable in the team. So I had the confidence to do well and yeah, I just took my chances, which I always did in my career.”

This was the equivalent of Michelangelo comparing the Sistene Chapel to the doodle his daughter made for their fridge. On a summer’s evening in the East Midlands, Bergkamp scored what is perhaps the finest hat-trick in Premier League history.

All three were nominated by Match of the Day for their Goal of the Month – a competition won by the third goal, which was later described by Wenger as his favourite Bergkamp strike.

“That’s how good (his goal vs Leicester) was!”

“He played like he had a helicopter, hovering above the pitch he had that much vision.”

Perry Groves on just how good Dennis Bergkamp was 🇳🇱

The Netherlands international had already made a substantial impression at Highbury. Signed by Bruce Ricoh in 1995, his team-mates would sarcastically bow at his feet on the training pitch, saying ‘we are not worthy’ in an effort to wind him up.

Once Wenger came in, and Bergkamp began producing genius on a weekly basis, the sarcasm stopped. Ian Wright, a man renowned for his puppyish hyperbole, described Bergkamp as ‘the best signing Arsenal ever made’. On this occasion, he was spot on.

By 1997, Arsenal felt increasingly confident they were in a position to challenge the dominant Manchester United for silverware. But Leicester City were not easy opponents.

To paraphrase an old Brian Clough quote, league championships are not won at Old Trafford or Anfield. They’re won at places like Filbert Street, where the fans create an intimidating atmosphere and the opposition are quite happy to kick you off the park.

Martin O’Neill’s team were never quite thugs, but a line-up containing Matt Elliott, Neil Lennon, Robbie Savage and a young Emile Heskey were never going to be pushovers. Their stubbornness made Bergkamp’s feat even more impressive.

His first effort came after nine minutes. Marc Overmars, who would go on to enjoy the best season of his career, nonchalantly rolled a corner towards his compatriot.

Bergkamp was obsessed with angles and shapes as a child and utilised those skills to the fullest here. Taking a touch to adjust the trajectory of the ball, the striker curled an unstoppable effort into the top corner.

Kasey Keller, the Leicester goalkeeper, stood rooted to the spot as if the subject of a life drawing class. While mere mortals would have described it as the best goal of their career, Bergkamp was just getting warmed up.

Arsenal kept their opponents at arm’s length for the rest of the half, calling to mind Thierry Henry’s dismissal of Savage at the 2014 World Cup. Having kept their powder dry, Bergkamp’s second was an illustration of how early-Wenger Arsenal married physicality to beauty with such effectiveness.

Ray Parlour picked out a rampaging Patrick Vieira, who had frightened the Leicester team to such an extent that nobody was anywhere near him.

He slipped a pass to Bergkamp in a central position, who treated Leicester captain Steve Walsh like a training cone in dribbling past him.

Faced with an onrushing Keller, Bergkamp stabbed the ball through the goalkeeper and kept on running as it looped into the air and dropped into the open net.

If we were feeling dismissive, we’d even call it a classic striker’s goal, but the movement and precision were far beyond the capabilities of most.

Having been bested for much of the encounter, Leicester incredibly levelled the match through late goals from Heskey and Elliott.

Filbert Street, an old Subbuteo style stadium, was rocking at the prospect of giving their illustrious visitors a bloody nose but they didn’t reckon with Bergkamp.

Picked out by a savvy ball from David Platt, the Dutchman took three touches that would become imprinted in the history of Arsenal Football Club.

Firstly, he killed the long pass and drew Elliott towards him. His next touch would be to flick the ball back past his marker, leaving Elliott contemplating all the life choices that had led him to that moment.

Finally, with the Leicester defence floundering, Bergkamp stroked the ball past the helpless Keller to complete his hat-trick. As the air visibly deflated out of the home crowd, Arsenal’s hero received the acclaim of his teammates. Never had it been so deserved.

Leicester incredibly ended up levelling the game, as Walsh obtained some redemption with a 95th-minute goal. But the night belonged to Bergkamp.

Journalist Simon Kuper once said: “The Bergkamp of the late 1990s, his mature phase, was a ‘footballer of moments’. He would sometimes play a terrible match but do one thing that no footballer had ever done before… It was as if he could see another dimension.”

Never has that run truer than one summer’s evening at Filbert Street.