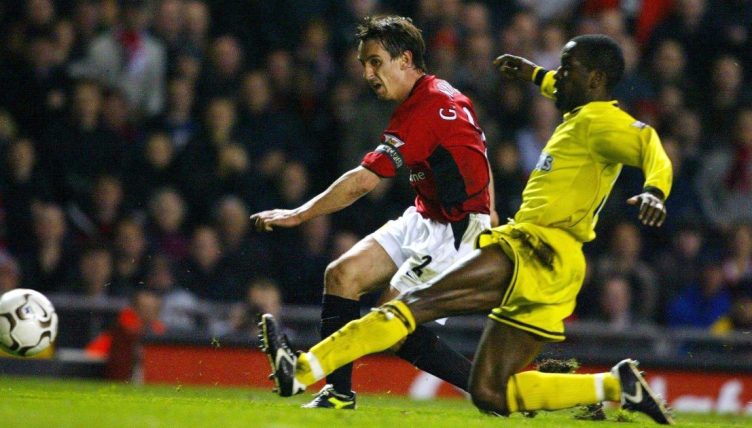 Gary Neville scored a total of five Premier League goals across two decades. Two of those goals came in a seven-day hot streak in April 2004.

The 2003-04 Premier League season was not a vintage one for Manchester United.

Arsenal, the eventual champions, went the entire campaign without losing a match, and Chelsea saw immediate returns on their new investments, finishing second in their first season under Roman Abramovich.

The contrasts in the transfer market were stark: Arsenal improved an already strong squad by replacing David Seaman with Jens Lehmann, while Chelsea went for international superstars like Hernan Crespo, Claude Makelele and Neil Sullivan.

United, whose squad was a mix of fading Treble winners and underwhelming new players, made do with unknowns like Eric Djemba-Djemba, Tim Howard and a young Cristiano Ronaldo.

In hindsight, expectations should have been low.

There was, however, a silver lining to that cloudy Manchester United season. Not the unearthing of Ronaldo, who still showed limitations during his ‘pieces of straw in hair’ days.

Not even victory in the 2004 FA Cup final, the excitement of which was lessened by the quality of opponent (Millwall, led by player-manager Dennis Wise) and also by Alex Ferguson’s substitutions (Roy Carroll was given a six-minute cameo once United were 3-0 up).

No, the silver lining of Manchester United’s 2003-04 season was when Gary Neville — who across his career registered a goal every 7,000 minutes — scored twice in a week.

When United hosted Leicester City on 13 April, 2004, they occupied third place in the table.

And though that seemed shocking and unacceptable at the time, the starting XI facing Leicester was, all things considered, not one of a title-chasing side.

David Bellion was charged with providing the creative threat, and when United eventually took the lead, Djemba-Djemba was introduced to protect it.

Fair play to Gary Neville then, for dragging himself up from that pit of mediocrity to score the only goal of the game.

A front two of Diego Forlan and Louis Saha had somehow failed to break the deadlock, so the right-back, desperate to avoid further embarrassment for the club, scored his first league goal in three years.

Weirdly, it was a really good goal.

Not good in a Goal of the Season kind of way, but good because Neville both created a goalscoring opportunity and then, approximately six seconds later, finished it.

Our @PremierLeague campaign begins against Leicester on Friday – @GNev2 got the winner v The Foxes in 2004! #MUFC pic.twitter.com/DgmWHL4dwK

It started with an uncharacteristic Trivela of a cross-field pass, which Ronaldo would probably have finished then and there had he not suffered from a queasy feeling of deja vu: this was the kind of showboaty pass he was getting from Ricardo Quaresma at Sporting, not from Gary Neville at Old Trafford.

Nikos Dabizas could only fall over the ball and divert it into the path of Neville, who had covered a frankly ridiculous amount of grass to get into the box.

The thwack of a finish was wholly satisfying — it felt like United’s talisman was thumping the club’s frustrations into the Leicester goal. And who was Ian Walker to stop him?

“That was one of the best five goals I’ve ever scored,” said a self-aware Neville after the game.

The wait for his next goal was not three years, but seven days.

Old Trafford’s visitors this time were Charlton, and Neville again found himself in a turgid United lineup, with Ferguson resting players ahead of the must-not-lose final against Millwall.

The United midfield on April 20, 2004 was Darren Fletcher, Nicky Butt, Djemba-Djemba and Bellion.

This time, however, Neville didn’t have to break the deadlock. That job was entrusted to Saha, so the defender’s 65th-minute strike was in fact something of an indulgence — a rare moment of greediness from a player determined to board his two London buses at once.

The Charlton strike, though less beautiful than the Leicester one, was vintage Neville: a professional surge forward, a very heavy first touch and a slightly unnatural-looking shot that crept in past a prostrate Dean Kiely.

Just lovely, in other words.

So what if Arsenal hadn’t lost a game all season? Neville had just matched Francis Jeffers’ tally for each of the previous two campaigns.

It almost didn’t happen, though. Fifteen minutes before his goal, the right-back had been lucky not to concede a penalty, with a felled Paul Konchesky booked for diving instead.

And that, arguably, was as good as it got for United in 2003-04. The league was lost, the FA Cup final a formality. Two goals in a week for Gary Neville was at least something to cheer about.

Although Neville would play for almost seven more years, the Charlton goal in late April 2004 would be his last in the Premier League. Scoring did not becoming a regular weekly endeavour for the full-back.

It is possible, however, that the two-goal bonanza affected Neville more than he initially let on.

While his post-match comments were self-deprecating, his 2004 contributions to the CBBC show Xchange tell a different story.

Gary Neville’s football surgery, a segment on the programme and the BBC website, contained — of all things — a Neville-endorsed ‘shooting clinic’ for youngsters.

“You don’t have to blast the ball to score,” Neville explained to a generation of eight-year-olds who would presumably aim higher than a goal every 7,000 minutes.

“The most important thing is accuracy. No matter how hard you hit the ball, you’re not going to score if you don’t hit the target.

“With your first touch, you should take the ball away from the defender to give yourself space for the shot. This will also stop the ball getting caught under your feet.”

Hastily written words provided by a CBBC intern? Or Neville’s sincere attempt to justify that mis-control against Charlton? We may never know.

“And then you can just pass the ball into the net,” he added. “Aim for the corners — it’s the hardest place for the goalkeeper to cover.”

The absolute cheek of the man.